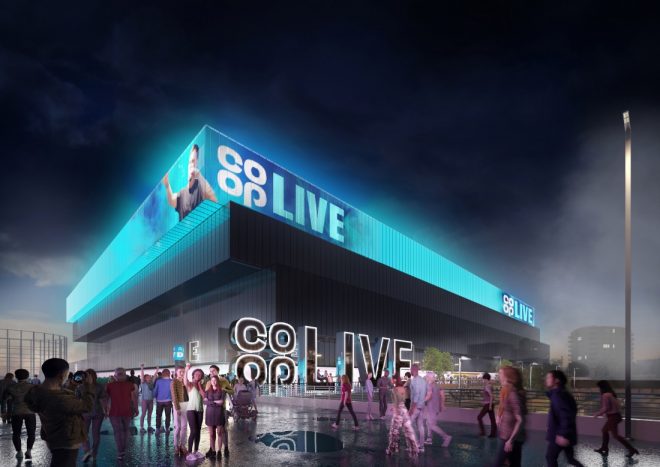 A DONEGAL man is leading the development of the UK’s biggest entertainment arena.
Construction of Manchester’s Co-op Live, the 23,500-capacity arena, started last week and OVG, the developer, is investing over £350m to create one of the most sustainable live entertainment arenas in Europe.
Declan Sharkey (36), from Falcarragh, is a Senior Principal at Populous, the leading global design and entertainment specialist design practice with 19 offices and 700 employees around the world.
He is also leading a number of other projects including the practice’s competition bid for the new San Siro Stadium in Milan, Italy.
A former pupil of Pobalscoil Chloich Cheannfhaola (PCC), Declan is the son of Patrick and Agnes Sharkey, Lower Carrowcannon, Falcarragh. His twin brother, Damien, is managing director of HUB, a London-based residential developer.
An image of Declan and Damien Sharkey adorned the front page of the Donegal News back in 2002 when the pair secured more than 1,000 points between them in the Leaving Certificate exam.

CAREER PATH
Speaking to the Donegal News from his London base this week, Declan Sharkey admitted that his career path could have been so different had he decided to go to Trinity College, Dublin, to study Law.
“I took a year out before going to university and worked in dad’s joinery business. That experience probably pushed me towards architecture so I went to Queen’s University,” he explained.
Having graduated with a first class honours degree he completed his Masters at Cardiff University, graduating with a distinction, before taking up employment with Foster + Partners where he worked on the prestigious McLaren Technology Centre and Langley Academy as well as projects in Kazakhstan and Russia.
Since joining Populous more than a decade ago Declan has worked on a diverse, global portfolio of innovative projects, including new performance and entertainment venues in Italy, Finland, Spain, Denmark, and Ireland, as well as large sports master plans in the UK, India and China.
“Populous was doing lots of work in the lead up to the 2012 Olympics in London, including the design of the main stadium, when I joined. It was an exciting time,” he recalled.
In 2011 Declan visited 10 different cities in India as part of an international delegation organised by the AIFF (All India Football Federation). His input and expertise proved invaluable to the Indian Super League’ future infrastructure development plans.
He was selected as a RIBA Rising Star in 2017 and became the practice’s youngest ever Senior Principal in 2019 at the age of 34.
The Aviva Stadium and 3Arena in Dublin, the T-Mobile Arena in Las Vegas, Wembley Stadium as well as the Tottenham Hotspur Stadium in London and Stadium Australia in Sydney are just a few of the iconic sports and entertainment venues that have been developed by the team at Populous over the past 30 years.
“I’ve worked on a whole range of entertainment venues and stadiums around the world, including the new Riverside Stand at Fulham’s Craven Cottage and I’m currently leading a number of projects including Co-op Live in Manchester, and the competition for the new San Siro Stadium in Milan,” he said. 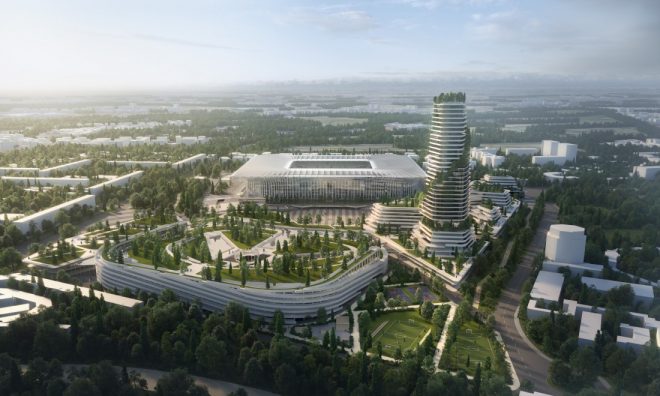 The Cathedral, the design for the proposed new 60,000 stadium in Milan.

Co-op Live will see the first in a new breed of world-class music venues while ‘The Cathedral’ is a new 60,000 capacity stadium for the legendary football clubs of AC Milan and Internazionale Milano.
Both designs respond to very ambitious briefs and objectives, challenges which Declan thrives upon and has demonstrated his ability to meet and exceed throughout his career.
“It’s two very exciting projects to be leading and I’ve a talented team alongside me. In Milan, we’re dealing with two iconic clubs and we’re looking at bringing the fans closer to the action and making it an unforgettable experience.
With projects costing anywhere from €100m up to over €1 billion, Declan and his team can spend two to five years working through the planning and design process before they even break ground.
Once the planning permission has been awarded it takes another 24 to 36 months to deliver on site.
“I spend my time travelling the world helping to deliver some of the most iconic sporting venues which isn’t too bad for a young lad growing up in Falcarragh who used to spend his weekends watching Match of the Day and the Sunday Game on television,” he laughed.
In the late 1980s Populous did a lot of work on redeveloping Croke Park while more recently they’ve delivered the 3Arena and the Aviva Stadium.
“We’ve a strong relationship with Ireland and I’m fortunate enough to be able to go the Aviva stadium every year to watch Ireland play in the Six Nations,” he said. 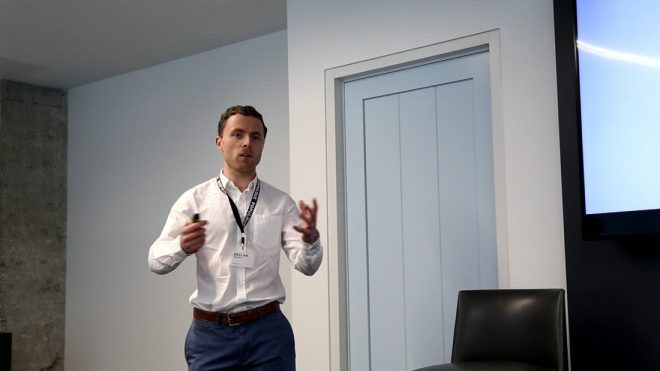 While Declan has managed to get a front row seat at some incredible sporting events across the globe including the NBA play-offs at Madison Square Garden, Centre Court on Wimbledon final day and the Milan derby he has to come a lot closer to home for his sporting highlights.
“There’s nothing quite like being on the sidelines at a Cloughaneely match or watching a game of hurling in Waterford,” he admitted.
“I’ve great memories playing under-age for Cloughaneely and that’s what ultimately gave me a huge appetite for sport. To combine my profession with sport and entertainment is the perfect marriage,” he added.
Covid restrictions have meant that Declan and his young family haven’t been able to visit Donegal for much of the past two years.
“My wife is a GP and we have two young boys. I play golf and I’m a football referee, but I enjoy nothing more than to spend my weekends with my family. My youngest son hasn’t seen his grandparents yet but we hope to rectify that in the coming months,” he said.
“Pre Covid it wouldn’t have been unusual to get up at 4am and head off to Heathrow on my way to Helsinki, Milan or Dublin for meetings and not get home until 10pm that night. That routine would be repeated a few times each week. You have to be passionate and committed in this job but it’s also very rewarding,” he said.
With travel restrictions due to be eased over the summer months, the global stadium and arena designer can expect to be spending a lot more time in the air but not before he gets a trip home.
“I’ve been lucky enough to travel the world but there’s nowhere quite like Donegal. It’s just so beautiful and will always be home,” he said.
Declan is passionate about enhancing the role of the architect within the design and construction industry. In the post-Covid world, the role of architects’ unrivalled knowledge, expertise, and value to projects, clients, and communities has never been more important in creating environmentally and socially sustainable architecture.
Since working on Langley Academy, one of the most environmentally sustainable education buildings in the UK, early in his career, Declan has been committed to developing sustainable solutions for mass audience venues around the world.
“It’s an incredibly exciting time for Populous and I’m looking forward to playing my part in their continued development and growth.
“My ultimate dream is to be able to sit in some of these new state of the art venues with my two sons and watch a concert or a game of football.
“In the meantime, there’s the projects in Manchester and Milan, two others which are confidential and a couple of others which are in the early stages of development to keep me going,” he said.