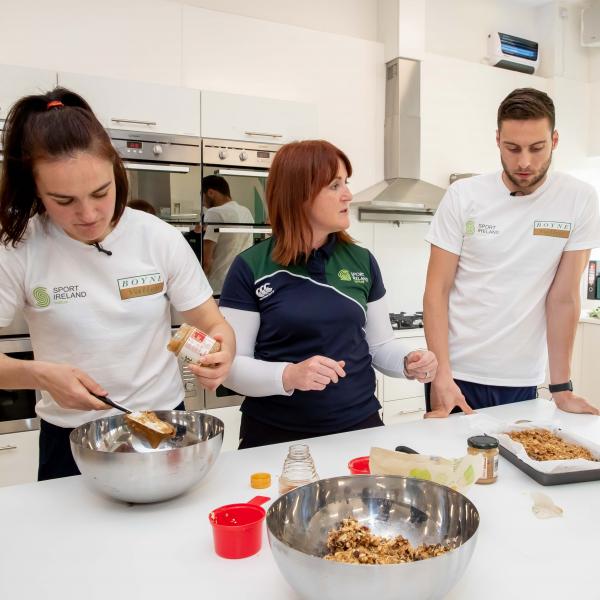 A LETTERKENNY woman is finalising plans for the Tokyo Olympics.
Dr Sharon Madigan is Head of Performance Nutrition at Sport Ireland and she works with the Irish Olympic Team.
The eldest daughter of Jim and Mary Madigan, Ramelton Road, Dr Madigan’s sister Bronagh works in Letterkenny University Hospital while her brother Paul is employed at Pramerica.
She is well-known for her work as a performance nutritionist for the High Performance Boxing team and has worked with young boxers and the international team who have had numerous successes at European, World and Olympic games since 2003.
She has also worked with the Ulster Rugby team, club and county GAA teams (including Donegal) and currently works with the Olympic Council of Ireland as a member of the sports science and medical team.
Speaking to the Donegal News this week, Dr Madigan said she was delighted that the Olympic Federation of Ireland has started preparations for the roll out of the vaccination programme for its athletes and support staff who will travel to the Games.
“The most important thing for these athletes over the next 100 days is that they remain healthy and injury free. If we can manage to achieve that then the world is their oyster and who knows what they can achieve,” she said.
A past pupil of Loreto, Letterkenny she always wanted to study dietetics but her Leaving Certificate results meant that she had to take a more circuitous route than originally planned to get there.
“I’ve been told over the years that some murderers got out of jail quicker than I got through university,” she laughed.
A Biological Science degree out of Coleraine was followed by a Masters in Nutrition and Dietetics and professional qualifications in Southampton. Work as a community dietician within Belfast Health and Social Care Trust followed before going on to specialise in respiratory medicine. She continues to work part-time with the Trust twenty years on and lives in Belfast with her husband and two teenage children.
She started a PhD in Jordanstown around the time that the Sports Institute was being developed in Belfast and worked with them between 2002 and 2010 when she took up employment with Sport Ireland.
Next month, the Letterkenny woman will travel with the boxers to Miyazake on the southern island of Kyushu before moving to Ireland’s main camp in the city of Fukuroi, three hours southwest of Tokyo.
“Due to Covid, the athletes will only move into the Olympic village five days before they compete and then leave immediately after their event. There’s acclimatisation problems – 12 to 14 time zones – not to mention the heat and humidity issues,” he said.
In the build-up to the games Dr Madigan, who was the performance nutritionist with the Irish Olympic Team in London and Rio de Janerio, has worked closely with the boxing and rowing teams as well as the judo athletes, modern pentathletes and a few individual athletes.
“It’s going to be a massive culture shock for the athletes – even trying to read food labels,” she said.
In a bid to make the transition as seamless as possible Team Ireland has sent equipment and food out to their camp in Japan. Included is Weetabix, porridge, Barry’s tea, Tayto Cheese and Onion crisps and Digestive biscuits.
“There’s a time and place for everything. There’s no such thing as a good or bad food. When athletes are away for five to six weeks, a chocolate Digestive and cup of tea or a packet of Tayto Cheese and Onion can go a long way in supporting their mental health. It’s important that we make their stay as relaxed as possible,” she explained.
While six rowing boats already qualified for Tokyo, many of Ireland’s boxers are still at the qualifying stages and must compete in Paris early next month.
Milford’s Brendan Boyce has secured in the 50K walk while Letterkenny’s Mark English (800m) and the Magee siblings from Raphoe (badminton) are hoping to join him.
“I worked alongside Patsy (McGonagle, Irish Athletics Team manager who is from Ballybofey) at previous games and he’ll be missed but hopefully we’ll have more than one or two Donegal athletes involved,” she said.
She won’t stay in Japan for the Games.
“I hope to watch to be watching the Games from somewhere in Donegal. My job is to make sure the camp runs smoothly in the lead up to the Games in my role as head of nutrition and as assistant camp manager. I’ll probably do a bit of driving out there – taking the athletes to and from training – but I’ll be back home before they start,” she said.
Earlier this week the Olympic Federation of Ireland (OFI) confirmed that none of their four pre-Games training venues is among the 40 or so municipalities to have withdrawn as hosts for visiting teams this summer. It comes at a time when concerns over another Covid-19 wave in Japan are rising.

Many young people have been struggling with their health and nutrition during lockdown, says Dr Sharon Madigan.
“There’s so many influencers out there today who have some very interesting ideas around diet and eating habits which might suit them but may not, in the long term, suit a lot of people and might not prove to be even healthy.
“A lot of it is being driven by how people look but that doesn’t necessarily tell you that you’re healthy below the level of the skin which, really, is quite worrying.
“There’s a lot of pressures on young adolescents – not only from a physical point of view but also their mental health – around eating habits,” she said.
Dr Madigan believes that we should all go back to basics – eating sensibly, drinking sensibly and undertaking regular exercise.
“If your granny didn’t know what it was or looked like then maybe you should reconsider taking it. Keep it simple and eat plenty of spuds, pasta, rice – the staples – with loads of fruit and colour.
“The odd bag of Taytos didn’t do anybody any harm. You can even squeeze sweets in there too if you’re packing a lunch for your children as long as it also includes a roll, a yoghurt, some fruit and a drink.
“There’s a lot of diets out there but don’t spend too much time panicking about what you’re eating or what you’re not eating because that’s not good for your mental health.
“We all know that we’re supposed to eat four or five portions of fruit every day but, sometimes, the tricky part is doing what we’re supposed to do. As we get older it’s important that we try to remain physical and keep active.
“Elite athletes aim to be as healthy as they can be but if they’ve just run 10K or had a hard session they too have to put fuel back into the tank afterwards or they run the risk of picking up an injury,” she said.
Over the coming weeks, Dr Madigan will continue to combine her professional roles – which now includes a new Professorship in UL – with that as an underage coach of the Phoenix Basketball Club in Belfast.
“Basketball was my sport growing up. It’s funny as Letterkenny also play in our league and when I get back home to play against the Blaze in the Convent a lot of their coaches and parents are people that I grew up and we’re still friends,” she said.