LORCAN Connor is known in Donegal GAA circles as a nippy corner-forward but he will swap the short bursts for distance running this Saturday when he takes on his first marathon.

Connor is a star player for Downings and he played for Donegal in the 2014 All-Ireland Minor Final. He also won an Ulster Under 21 medal with his county and had a stint up with the senior panel.

However, with Gaelic Football off limits at the minute, he will take to the roads this week for a different type of challenge.

Along with his clubmate Eamonn Kelly, he will set off at 10am on Saturday and run 26.2 miles. Some of his teammates will join at different junctures to provide support.

The duo are raising money for Pieta House which provides a free, therapeutic approach to people who are in suicidal distress and those who engage in self-harm.

Connor works for an accountancy practise in Buncrana and is currently studying for his final accountancy exams, so he has plenty on his plate at the moment.

However, he recognises that a lot of people are fed up, and struggling with their mental health at present due to the implications of Covid-19 and the restrictions it places on their lives, and he is happy to raise awareness.

“During the first lockdown last year, I was laid off work for three weeks and I was just flat out training.

“I had never done any sort of long distance running before but I said to my girlfriend Lauren that I was going to run from Milford to Downings and one day I just did it.

“That was around 20km and the seed was kind of planted from there. I had the idea that I would like to do a marathon and I decided to just go for it and try and raise some money for Pieta House.

“I think a lot of people are struggling with this lockdown and there never seems to be any good news.

“You see people that are normally quite happy and enjoy life and they are feeling it, and it makes you think how are other people coping with everything.

“Pieta House do great work and they hold the ‘Darkness into Light’ every year which is brilliant, but it won’t be able to happen as normal this year.

“I decided that I would raise some money and maybe try and raise awareness at the same time.

“I think all in all, the figure is now nearly at €5000 which is overwhelming. Over 200 people have donated on the GoFundMe page which is great.

“My own employers McLaughlin-McGonigle in Buncrana have been very supportive.

“Ocean View Bar & Restaurant, the Goose & Gander Pizzeria and the Downings Bay Hotel have all sponsored vouchers as well.

“Everyone who donates is in with a chance of winning the vouchers so I’d like to thank them for the support as well.”

Connor enjoys training and always keeps himself in good condition, but being ready to play a match and being primed for a marathon are two very different propositions.

“Myself and Eamonn Kelly are doing it. Eamonn would be into endurance challenges and was meant to do The Race last year until it was postponed. 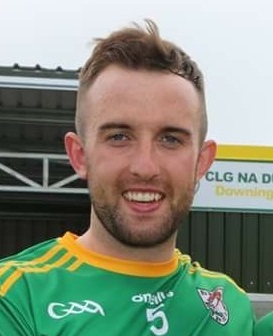 “Nobody trains for a marathon in just six weeks but that is what we have done.

“Neither of us have run a marathon before and we don’t really know what we’re doing so we have been trying to get as much information as possible, and the experts say you should do around 21 miles before you do the marathon and that’s what we have done.

“We should be alright. We know at some stage that we will hit the wall that they talk about but we’re both fairly determined so we should get through it.”

Usually at this time of the year, the All-County League would be in full swing and Connor would be leading the scoring charts for his club.

While inter-county teams are able to return to training on April 19, there is still no confirmation on when club teams can meet up collectively again, and the 24-year-old says that it has been a frustrating few months.

“One of the reasons that I have only trained for six weeks is because I was hopeful that the gaelic would be nearly back at this stage.

“I didn’t want boys to be down kicking ball on the pitch, and me having to go out to run two or three hours instead.

“So I decided to get it done by Easter and then by the time I recover, hopefully I will be raring to go for the football again.

“It’s one of those where you get your hopes up because you think it might go back and then you hear about a setback and football is off the table again, and your balloon just deflates again.

“But hopefully it won’t be long before we are back.”

If you would like to donate to Lorcan’s fundraiser, you can do so at gf.me/u/zjkv6z.