Shaun ‘Yank’ Boyle talks football, work and life in the land of Oz

It’s a little over a year since former county minor Shaun ‘Yank’ Gallagher and his partner Clodagh Molloy departed west Donegal in search of adventure and a shot at life in Australia.

However, they’d only just landed in Sydney when the seriousness of the Covid-19 pandemic and its impact began to take a global hold.

The fight or flight response around them seen many of the Irish that had just landed in Oz at abut the same time immediately bail and return to home soil.

However, with the likes of Naomh Muire clubmate Darragh White already there and with Dungloe pals Conor and Ryan Greene also well settled in Sydney, both Shaun and Clodagh decided they’d attempt to stick it out.

14 months down the line, Gallagher admits that gamble has paid off. Australia’s immediate and steadfast reaction to the virus meant life more or less returned to normal there within months.

From such a distance, he says Ireland’s fumbled attempts to get a handle on things is hard to watch and, indeed, understand.

FC: You’d only just arrived in Australia when things got really serious…

SB: I was only out here about three or four weeks when lockdown started. Things got very quiet. I was actually out of work for a few weeks. I was in and out of labour hire companies. But the bush fires happened here around that time. I actually got a job as a commercial admin for that. I was very fortunate. I started with a company called Laing O’Rourke. They’re a UK company that works in construction all over the world. I’m now sponsored by them and my visa has just come through in the last few days. I’m delighted with that. I’m one of the lucky ones. So many others would have came out at the same time as me and they’d have been on planes back within a month or two later. Talking to friends and family, it’s hard to get my head around how restricted things still are back in Ireland. And you can’t really say too much about how good things are out here as I know it’s really tough at home right now. We’re living in the Zetland/Roseberry area of Sydney. It’s only a few minutes to the likes of Bondi Beach and Coogee. We’re central enough. The city itself is just 10 minutes the other way. It’s a really nice and friendly place.”

FC: How long were you idle on arrival in relation to work and football?

SB: When I came out at the start, it was a case of trying to get settled in. Football wasn’t really on my mind. You’re just mad to get work sorted. Darragh was already out here and he soon had me training with the Clan na nGael club in Bondi. When Covid hit, restrictions came in and the football quickly stopped. Everything closed up. That lasted about three to four months. That’s when I went down to the bush fires. When I came back up things were already opening up again. I got back training and we had a re-jigged sort of tournament. It was nicknamed the Covid Cup. But it was just great to be back playing. It was sort of a trial run at a championship to see how it would all work. We won the competition. And then championship started soon after. It was knockout. But it worked really well. We reached the final but we were just edged out. The league has started now again. I’m with Penrith Gaels this year, it’s only five minutes up the road. We’ve a good side. Lee Cullen from Fermanagh is with us, Ryan Lyons as well. We’re at round three here in the league. We’re out next week. Then we’ve a beach tournament at Maroubra. That should be fun. Then, it’ll be more league before we head into championship.

FC: You say life has returned to normal in Australia, or as close to it as you could possibly hope?

SB: There are some subtle restrictions but you’d hardly notice. You’re not wedged in pubs or restaurants like you once might have been. That side is very controlled. We haven’t had any cases in nearly a month now. By that I mean Sydney. It’s looked at state by state here. They just close the border and deal with it if anything pops up. They also closed down flights at the time and had strict measures for anyone that did come in. My partner worked in the airport when she first came here. She said anyone incoming was immediately escorted onto a bus and taken straight to a quarantine hotel for two weeks. That was from day one. And you had to pay for that yourself. To be fair, it never really got out of hand here. When you read and see what is still going on at home it’s hard to understand. Even at the start, the construction sector never stopped. Restaurants, cafes and nightclubs closed down for a bit. After four or five weeks they began to open up again. We’re still taking precautions like wearing masks on public transport and so on. But life is pretty much back to normal. They’ve dealt with it really well.

FC: GAA still hasn’t received a green light at home but you’re in the middle of your club season now. It’s some change from the Banks and the lower Rosses in March I’d imagine… 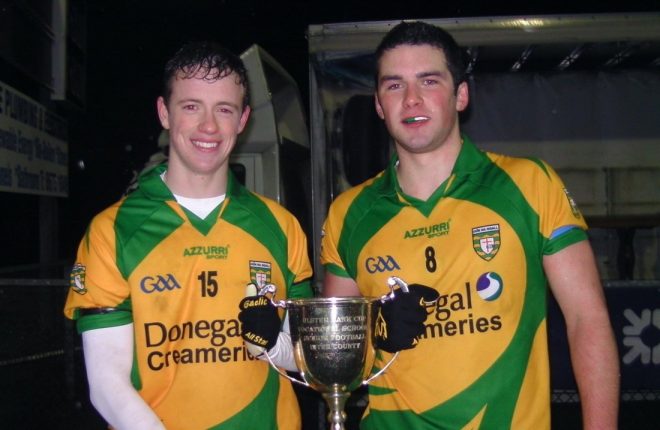 SB: We’re really lucky. I know we see the news and read stuff online, but we really are in a bit of a bubble over here. We’re very fortunate that we can go out to eat, have a drink with friends and, as you say, play a bit of football. I can’t begin to imagine how hard it is at home. We really don’t have a clue. When I left things were still good at home. And the truth is we never really felt the impact of it here. It’s a different way of life over here. We’d usually have started our pre-season in January and February back home. It’s freezing and you’re nearly crying going to training! But it’s in complete contrast to over here. I’m getting sunburned instead of frostbite. Darragh especially loves that. He likes the sun and he has the shirt off more than he has it on! Again, we’re very fortunate. I lived in Boston for a while. And it could be a bit crazy at times. It’s much more laid back out here. Sydney is a really nice city, a green city. It’s a lovely way of life.”

FC: What does a normal weekend consist of now for you and the other Donegal lads?

SB: At the start we obviously weren’t meeting up and we were following those guidelines. But since Christmas, that would be our summer, we’ve been getting together and seeing each other. If we’re out on a boat party or having some fun, people at home might see a snapchat and they can’t get their heads around it. You feel bad for them. Hopefully, things can get better there sooner rather than later. Even the GAA, so many of the lads at home are finding it really hard not having that in their lives. Training and games were such an outlet for all of us.

FC: How long do you think you’ll stay in Australia?

SB: With the sponsorship, that’s two years. I’ll see how that goes. I can’t see myself staying here for ever. I’d say a few years and then come back and end the career with Naomh Muire while I still have a bit of life left in the legs. We’ve been hit hard with lads that have gone away. It’s not easy to keep the show on the road. We won the Intermediate in 2013 with a very young side. We were going really well. We went up to senior championship. Out of that side now Paddy McCafferty and Brian Gillespie are the only two left.”