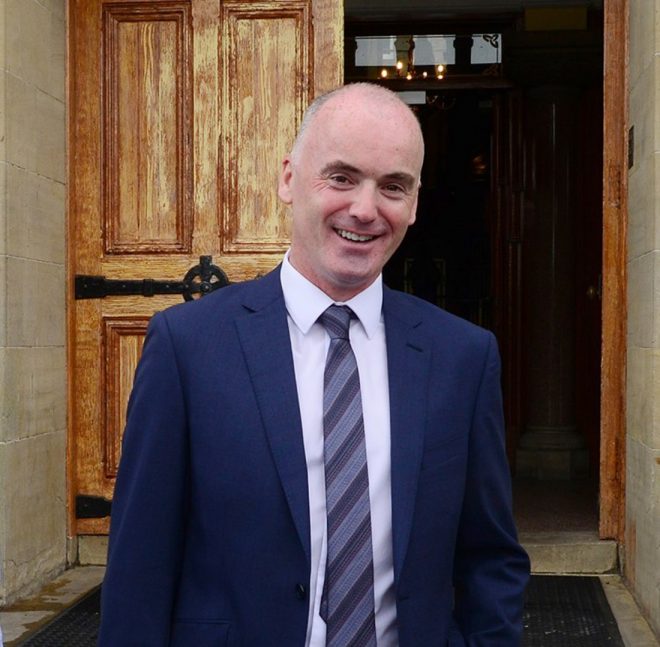 FOR school principal Damien McCroary, the phrase “every day can be a school day”, perfectly sums up the past academic year.
In that time Covid-19 has presented considerable challenges to Mr McCroary, his staff and students at St Eunan’s College, Letterkenny, including closures, cancellations, remote learning and more.
Leaving Cert students returned to the classroom on Monday for the first time since last December. A target date of March 15 has been set for the return of fifth year students, with the remaining students due back after the Easter break.
“Nothing can replace the face to face contact and it’s great have the sixth years back. There’s a real buzz about the school and both the teachers and the boys are delighted. We’ve almost a full-house. There’s very few missing and we have an explanation from anyone who is not here.
“They are seeing one another once more in person which is hugely beneficial for a number of reasons, not least their mental well being,” Mr McCroary said.
A native of Doneyloop, Mr McCroary has been a member of the teaching staff in St Eunan’s since 2002. He was deputy principal for two years before taking over from Mr Chris Darby in 2019.
“I was just getting used to the job when we got the call one Thursday last March. We were lucky in that we had Google Classroom up and running – that’s our digital platform – and had been doing some basic training when the call came.
“All of a sudden we had to go online and for a while it was the blind leading the blind. We thought it would only be for a short period and yet here we are almost twelve months on,” he recalled this week.
“We were also lucky in that a lot of them were already on our system and they had their own email addresses and log-in details but nobody expected it to last this long. We’ve had to take it one day at a time,” he added.
While face to face teaching resumed at the start of the 2020/21 academic year, staff decided to continue with the Google system with saw some homework being delivered and corrected online.
That would become very useful when the second lockdown happened before Christmas.
“The staff have been fantastic, rising to each challenge and making the best of a very difficult situation. Hopefully the government target dates will now be met and we’re get all the other students back over the coming weeks without any complications,” he said.
Each classrooms is equipped with hand sanitizer and wipes while students are socially distant and wearing masks.
“The boys are well used to  now. No one enters the school building without a mask and at break times we’ve made a few alterations within the school to allow the students to keep their distance. We’re trying to follow all the safety guidelines and protocols,” he said.
More than 1,000 people will be on site when the school fully re-opens (100 plus staff and 912 students) with a waiting list that is growing.
“We filled 180 first year places in the enrolment last October/November while 140 will be leaving the college this year.
“We’re finding that more and more families are moving out of the cities and back to Donegal where they can often work remotely. We’ve had a lot of queries from people looking for places this September but we’re full,” he said.
While the Leaving Cert class of 2020 had a difficult year, Mr McCroary believes that the class of ‘21 are an even more resilient group.
“Not only had they to ensure an interrupted fifth year but their sixth year too. At least now the decision has been made about the Leaving Cert and while some clarity is still needed there’s some sort of plan in place.
“We’ll spend much of this week trying to help the students make that decision before the portal opens next week when they have to decide whether to go with the accredited grade or the grade plus exam this summer,” he said.
St Eunan’s College has traditionally been known for its prowess on the sporting field while a growing number of book, cinema and games clubs have been established in more recent times. All that has had to be suspended.
“The extra curricular activity is very much part of the St Eunan’s experience but they understand why that has been curtailed,” he said.
Broadband remains a real issue with a number of students finding it difficult to participate in online learning due to poor Internet connectivity.
“There have been issues and we’re mindful that there are pockets of Donegal requiring an upgrade in those services. Also, some students are at home with siblings who are attending different schools or who are at college. There may be as many as five or six people using the broadband in some households which, in itself, causes issues,” he said.
“It is said that every day is a school day and that’s certainly been the case this past year or so when I’m come to expect the unexpected.”