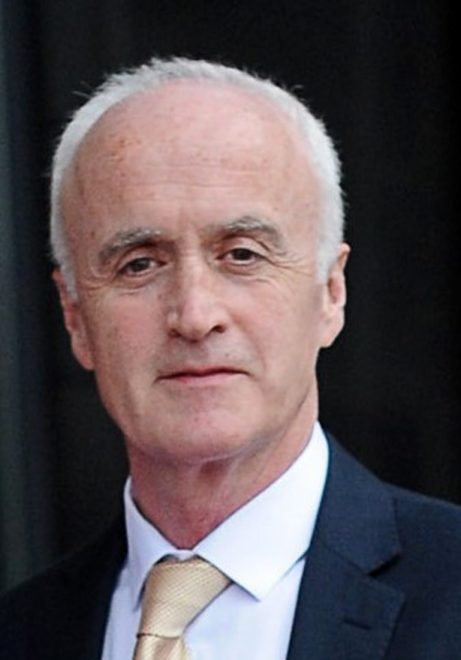 AFTER a career of public service spanning close on 43 years, Paddy Gallagher celebrated his last day at Letterkenny Institute of Technology on Friday last.
Former colleagues and family members participated in the celebration by going online to congratulate and pay tribute via a series of zoom calls.
Paddy Gallagher joined the staff of Letterkenny Regional Technical College in 1993, a few years before it was rebranded as Letterkenny Institute of Technology.
At that stage, numbers attending the Regional Technical College had declined substantially as more and more young people were choosing to attend universities.
That trend has since been reversed and today the college, which had 600 students in the mid-nineties, is home to more than 3,000 full-time and part-time students.
Paddy started his career in the VEC Administrative Offices, which were located within the former Letterkenny Vocational School building on Ard O’Donnell, in November 1978 under then CEO, Seán Ó Longáin.
Within a year the offices moved to leased accommodation on the upper floor of the Gleneany House building on the Port Road and then on to Pearse Road, adjacent to the Community Centre, before returning to Ard O’Donnell in 1987, following the opening of Errigal College at Windyhall.
“When the RTC gained autonomy in 1993 I was given the option of moving out the road (Port Road campus).
“Bill Fitzsimons was principal at the time and I went to work with Linda McGlinchey in salaries before moving into Student Services,” he recalled.

Clubs and societies
Working closely with Fr Anthony Griffiths, and then Fr Ciaran Harkin, he also liaised with the Students’ Union.
“They were good times. We did a lot of good work developing a programme for clubs and societies. What started out with a small gathering in a local pub is now one the biggest social nights of the year in the college with three to four hundred people attending the annual awards night in a local hotel.
“Today there are 40 to 45 active societies in LYIT, excluding the existing sports clubs. There’s a lot of extra curricular activity in place for students nowadays.
“When the students first arrived in Letterkenny we looked after their accommodation needs and issues but that is now handled by the Student Union Welfare Officer,” he recalled.
Over the years he’s worked with three SU Administrators – Vicky O’Rourke, Fiona Kelly and Josephine Wilson.
“Vicky now lectures in marketing at LYIT, Fiona is the Student Union Engagement Officer while Josephine remains a very fine administrator,” he said.
Paddy also helped Patsy McGonagle look after a number of sports teams which represented the college, taking over the role of Sports Officer when the former Irish Olympic team manager retired in 2012.
As part of his new role, Paddy worked to increase participation in sport and physical activity across all levels and age groups, and across all sectors.
“As the college got busier we took on a number of different people in part-time, paid roles to look after the teams,” he said.
Paul McGovern and Niall McGonagle helped coach the soccer team before Shane Byrne, the present incumbent, started working in LYIT.
Likewise, Eamon O’Boyle was in charge of the GAA team before Donegal All-Ireland winning captain Michael Murphy took up employment at LYIT while Mark Cannon was in charge of basketball.
Today, Byrne and Murphy are joined by Johnny Baird (Ladies soccer), Dominic McGlinchey (Ladies GAA) while Niall McDermott has been appointed by Basketball Ireland as a Development Officer for both the college and county.
“We’ve enjoyed a good bit of success and credit goes to each and every one of the coaches and their respective teams,” he said.
Scholarships, first introduced in 2006, were initially only open to soccer and GAA players but that programme has since been expanded.

Landmark development
Along with having its own playing pitches, LYIT has a range of facilities in the state of the art An Danlann centre.
“That was a landmark development for the college. It’s a great facility and was something which was badly needed for quite some time in Donegal,” he said.
The popular figure has now opted to step away and retire from his duties, but plans to watch the college teams compete once more once restrictions are lifted. He also plans to watch more Finn Harps and Letterkenny Rovers games.
“I have met some lovely people and enjoyed a really great working relationship but it’s time to move on. I’ve no big plans for my retirement but I didn’t plan it quite this way,” he said.
Paddy’s wife Patricia (nee Kelly, from the Port Road) lost her brave battle with cancer in May 2019 and he admits that life has been a struggle since.
“We met when I was a student in St Eunan’s and we did everything together. It’s tough,” he said.
Paddy has two sons, Darren and David and two young grandsons Blake and Luca.
A talented sports photographer, he once covered games for local newspapers.
“I might start dabbling (in photographs) again. I’ll do a bit of walking and look after my two grandsons and we’ll see what the future brings,” he said.