AN artist who lost her father to Covid is creating a book of illustrations inspired by the fantasy world her daughter created to comfort her.

‘Lily’s Grandpa is an Angel’ is from the pen of Spanish artist Maria Gasol. Born in Barcelona, Maria has lived with her husband and two children in Gortahork for the past 16 years.

It was April 2020 when Maria’s father, 74-year-old Josep Maria Gasol, contracted the coronavirus. Despite being in good health, Mr Gasol succumbed to the infection and passed away on April 9.

Due to restrictions, Maria was unable to fly to Spain for his funeral. It was not until July that she was able to travel to be with her heartbroken family.

In the meantime the artist began to compile a ‘grief journal’, written from the point of view of a child consoling her bereaved mother.

But Maria’s own grieving and her own tears also sparked her daughter Nora’s creativity. Seeing how upset her mum was, six-year-old Nora conjured a magical land of angels where she imagined her late grandfather to be.

Moved by Nora’s fantasy world and her desire to console her grieving mum, Maria applied to the Irish Hospice Foundation in partnership with Creative Ireland for a seed grant.

The Foundation recently put out a call to groups and individuals inviting them to mark their response to the universal realities of death and loss, especially during the pandemic. 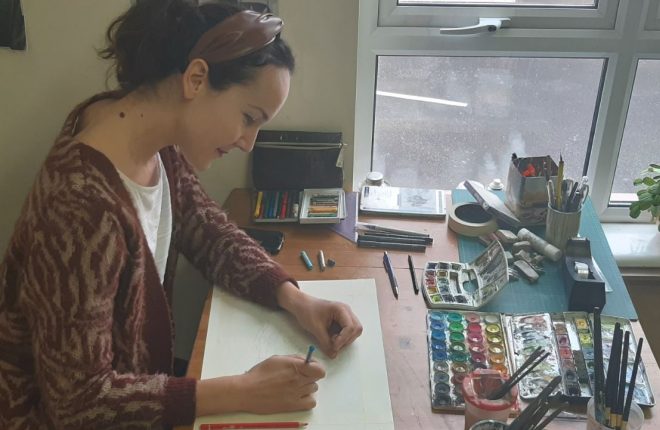 Barcelona-born Maria at work in her west Donegal studio.

Of the eleven grants available, Maria Gasol was the only successful applicant from Ulster.

Maria said, “My daughter would have seen me cry a lot after my father passed away. She is so imaginative and she was always saying ‘he is there, you can talk to him’. And she made this fantasy world where the angels live, where they go to school, where they have fun.

“Obviously I didn’t believe in the world itself but it really helped me and it was lovely to see that innocence in her. Based on this, I wrote a story poem.”

Maria stresses that her story is not based on her own personal experience but that it is a tale for everyone – that of a child helping a parent struggling to come to terms with tragedy.

“Children are very special because their imaginations know no bounds. When they see sadness their natural instinct is to want to make it better.”

In line with the Hospice Foundation’s application process, Maria partnered with her local community group, Falcarragh-based Pobail Le Cheile and has now begun to compile a digital illustrated book. It will be used to generate conversation around loss.

“I asked Pobail Le Cheile if they would collaborate with me and they were more than happy to do so. They have lots of contacts within other community groups and are part of the Health Forum.

“My thinking was that if I put it only on my own website not a lot of people would see it. But this way it will reach other community and health groups and who knows, it might bring soothing to others.”

The turnaround time is short as the project will have to be completed by April. For Maria that means completing 12 illustrations over the coming weeks. 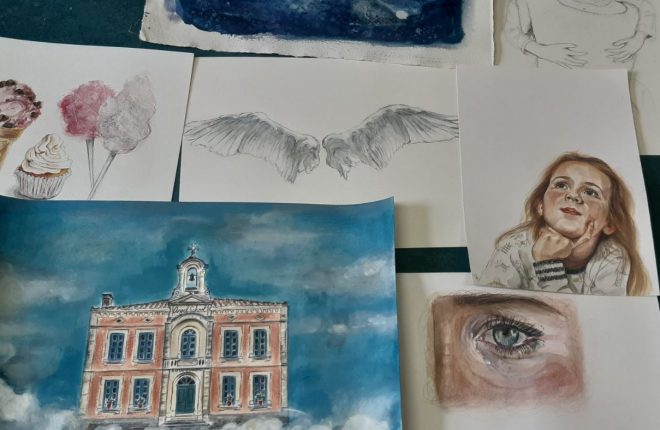 Some of the incredible sketches Maria has come up with. She intends to sell her illustrations before reinvesting the money in a mural.

Once the book is compiled and submitted, she plans to sell the illustrations before reinvesting the money in a large scale mural inspired by the project.

“For me it was very hard because I was not able to get to my father’s funeral. But when you are a creative person, you look at what you can do to help with your grief journey. So in some ways this has been therapeutic but a little bit of it is about honouring and remembering him too.”

Lily’s Grandpa is an Angel is Maria’s second book. She recently self-published The Zoo of Love, an illustrated book dedicated to her late father.

You can keep up to date with Maria’s work through her website, http://www.mariagasol.com