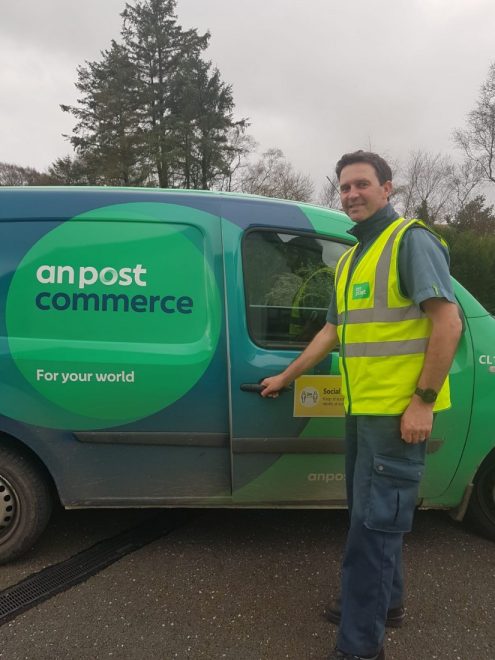 MARTIN McGinley has been delivering letters for An Post for almost twenty years.
Over those years, the job of a postman has changed considerably – something which has been thrown into sharp focus since Covid-19.
“When I started we were effectively a letter business which delivered the odd parcel. Now we’ve almost become a parcel business that also delivers a few letters. The drop off in traditional mail has been replaced by the explosion of parcels and packages that comes with online shopping,” he said.
Recent lockdowns and shop closures have led more people doing their shopping from the comfort of their living rooms.
While it’s been mostly clothes and home improvements parcels, packages or all shapes and sizes have been coming through the sorting office in Letterkenny.
“I’ve seen wheelbarrows, shovels, fishing rods and dumb-bells not to mention various car parts coming through here,” he said.
“With more people exercising, tracksuits, runners and other fitness accessories have also become very popular,” he added.
New guidelines for contactless deliveries have been put in place, so there’s no handing over of a scanner.
“It was fairly daunting at the start of the pandemic. If you went in someone’s gate, they’d want you to stay out but those fears have eased somewhat with the passage of time,” he said.
While work has always been busy, parcel figures have almost tripled on the Fanad route in the past two years.
“It’s always nice to see people get their parcels. You get to know a lot of customers because they would be repeat online shoppers. They tend to know what time you’re due to arrive and sometimes they might be waiting for you – even if I might be a wee bit late the odd time,” he laughed.
Since the start of the pandemic, he’s made an extra effort to keep in contact with the older and more vulnerable members of the community, especially those living alone.
For some people, Martin driving along in his An Post Caddy van is the only human face they may see over the course of their day.
“If someone needs a stamp, some groceries or a pint of milk I’m happy to deliver as I’m coming from Letterkenny every day and it only takes a few minutes to make that extra call.
“It’s the postman’s job to get to know his customers but I’ve really got to know some of mine this past year or so.
“I make a conscious effort to make sure older, more vulnerable people are okay and, where possible, I’ll stop for a wee chat, have a bit of craic with them and make them feel at ease. Sure, it’s not too much time out of your day. They only thing I can’t do since the pandemic is stop and have a cup of tea,” he said.
A former footballer with Fanad United, Martin already knows the area well although his run doesn’t quite take him as far as their playing pitches at Tri-a-Loch.
“My postal run starts two mile outside Kerrykeel and goes down through Rosnakil and Tamney as far as Fanavolty Church and then I head for Portsalon. I knew a lot of people in the area before I started work there. They’re good people and there’s always plenty of banter,” he laughed.
As a front-line worker, Martin and his colleagues have continued to work through the pandemic.
“In fairness, the company has been very good providing PPE while they’ve also staggered our start times in the morning,” he said.
Before Covid-19 it would not have been unusual to have between 65 to 70 people working in the sorting office in Letterkenny from 6am each morning in preparation for postal runs across the Letterkenny-Milford electoral area.
Martin is one of the ‘lucky’ ones in that his day still starts at 5.30am but some colleagues now clock on an hour or hour and a half later.
“It was a bit of a sacrifice for those postal workers used to getting up and starting the same time each morning for the last 15 to 20 years. It meant that their whole day was affected. Initially, it was tough but they’ve all seen the bigger picture.
“I don’t see the start times being changed back for the next number of months at least,” he said.
Given the volume of business, Martin was dreading Christmas but it went off without a hitch.
“It’s now busy all the time. A lot of people are working from home and the pandemic has brought out the best in people – that togetherness. It’s nice,” he said.
Such is the volume of parcels, An Post staff now make deliveries on a Saturday with bigger vans being introduced to the fleet. Plans are to make deliveries emission free over the coming years with the introduction of electric vehicles in Donegal.
“The electric points have already been installed in Letterkenny and we’re awaiting the arrival of a new electric fleet of vehicles later in the year,” he added.