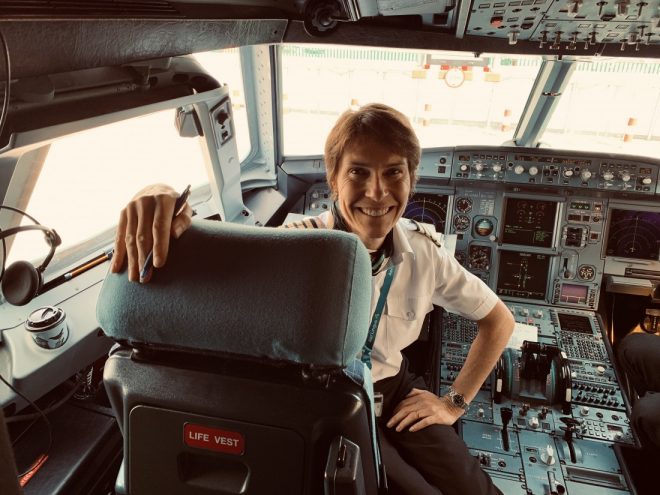 LIKE many, international pilots have had to adjust to a drastically different work environment over the past 12 months.
Letterkenny woman Louise Gilroy is an Airbus A320 captain based in Dublin. She is also involved with ‘Recover Irish Aviation’, a group of aviation professionals who are campaigning to ensure that their industry survives the Covid-19 crisis.
Captain Gilroy’s next planned flight is tomorrow from Dublin to London. It’s only her third flight of 2021 but she knows she’s among the lucky ones, saying she is “just grateful to be among the pilots who actually have a job right now.”
“The aviation industry has been devastated. We think we have been the worst hit – although the live music business would claim that too. It looks like we’ll be one of the last industries to start to recover. The situation is even worse now than last April. We had a bit of pick up in the summer, and we expected the winter to be quiet. The schedule was due to increase in April, but that won’t happen now,” Ms Gilroy admitted.

STANDBY
A pilot of thirty years’ experience, she is currently rostered five days per fortnight but most of those days are standby at home and it’s rare to be needed for a flight.
“This time last year I would get up at 4.30am before making my way into Dublin Airport for work and by 7am I’d be flying somewhere over Europe,” she said.
Married to Enda, who is also a pilot, the couple have two teenage daughters.
“We are helping out with a project ‘Recover Irish Aviation’ that some colleagues have set up. We think that travel has been demonised lately, and a lot of people can’t see the role of aviation beyond ‘dentist’ trips to Tenerife.
“Our problems aren’t that big when you look at people working on the front-line and those who have lost family members to the virus or others who can’t get home to see their families.
“That said, our job is more than simply taking people away on holidays. We play a significant role in transporting vaccines while more than fifty per cent of raw materials exported are carried in the underbelly of passenger planes,” she said.
The eldest daughter of Cathal and Winnie Gilroy, Bomany, the pandemic has meant that her parents haven’t been able to travel to see their grandchildren in over a year.
“Usually, they would come up on the bus to Dublin every few weeks,” she said.
Louise first started to notice a change in passenger habit in February 2020 when Americans stopped travelling to Italy.
“A lot of those passengers would have come through Dublin and we would have taken them on to their European destinations. All of a sudden last February they just stopped turning up,” she remembered.
“In March, which is one of our busiest months, we were carrying just four or five passengers on some flights. The only time I saw that before was the first Gulf War in 1991/92,” she said.
“We were still repatriating people but we were noticing the airspace getting quieter. There were no delays on the runways and we were getting shortcuts flying back to Dublin. It reminded me what it was like when I first started flying thirty years ago when there were a lot less aeroplanes in the sky. Then the cars started to empty out of the car parks and the terminal got very quiet.
“I’ve flown twice since Christmas – from Belfast City to London and Dublin to Amsterdam,” she added.
She had been scheduled to fly the new Airbus 321 NEO LR on its transatlantic route between Dublin and Boston this year.
“It is part of the Airbus 320 family so we only needed one day of additional ground training to be able to fly it. However, you need three flights to the US with the instructor as the other pilot before you’re qualified to do a flight as captain,” she explained. 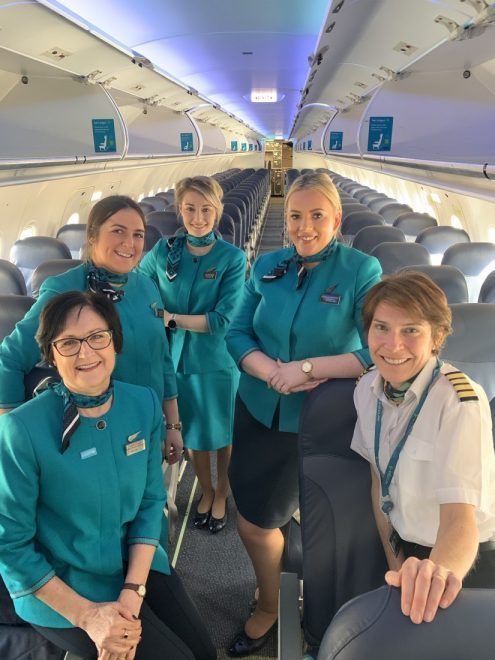 AIRLINE CLOSURES
“Unfortunately, the prospect of more airline closures and the loss of more jobs remains a very live threat because of the government’s lack of support for the aviation industry.
“They’ve put more money into the regional airports but we’re still facing into a summer of discontent.”
She added: “If you’re in Donegal and you’ve been vaccinated there’s no reason not to go into Derry or Belfast and fly to the sun or to visit your family in Europe. Yet it seems like there’s no plan for anyone flying out of airports south of the border.
“This isn’t about flying people around the place increasing health risks but we need a plan – when the health situation allows – to rebuild the economy. Other countries have plans in place but Ireland’s not even talking about aviation,” she said.
“I left Letterkenny in 1988 and it was unbelievable to get a job with an Irish airline the following year. It has allowed me to live and work in Ireland for the last thirty years but it’s possible that the last part of my career will be spent working abroad. That was not part of the plan,” she said.
Pilots cannot afford to stay grounded for too long but with air traffic decimated and some operators’ aircraft mothballed, it’s getting increasingly difficult to get the necessary flight time to maintain their license to fly.
“I would normally have about fifty flights done at this stage of the year and I’m about to do my third. That is where the industry is at now. I was in the simulator myself last month which, I hope, gives some reassurance to my passengers ahead of Friday,” she said.