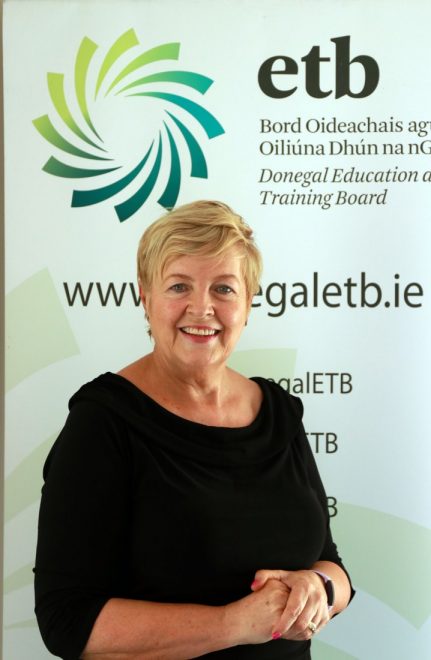 FURTHER education and training is a sector which caters for everybody. It is where adults can take classes to revisit their basic skills, where mature students return to learning and where people of all ages sit side by side on courses taken with an eye to employment or progression.
For the past nineteen years, Rose Duffy has been the first point of contact for thousands of Donegal people as they figure out what to do and where to go as they take those first steps back into education.
On Tuesday next she retires as Information Officer with Donegal ETB Adult Guidance and Information Service team
As Information Officer, she has helped more than 14,000 people navigate their way through the mountain of options in the adult and further-education sector for over-16s.
“As the first point of contact I always felt it was an integral part of my role to acknowledge the strength and bravery shown by people who make the choice to walk in that door or make that phone call.
“I would like to think I created a warm and welcoming space for people and ensured I was always non-judgemental, compassionate and empathetic in my approach,” she explained.
A native of Glencolmcille, Rose first came to Letterkenny as a seventeen-year-old to work for Stewart and MacLochlainn Accountants after completing her Leaving Cert.
She married Packie Duffy, a contractor from the Back Road in Letterkenny, and the couple have two children, Nicola and Johnny, and five grandchildren.

Marriage ban
“I am from an era where third level education wasn’t free, getting to do your Leaving Cert was your graduation and you went straight to work.
“The marriage ban meant I had to give up work once I started my family and became a stay at home mum to my daughter and son,” she said.
In 2002 after joining Donegal ETB, Rose was given the opportunity to return to education and studied part-time through NUI Maynooth.
“The ETB gave me a voice and made me feel valued and heard. I feel this is what education does for people,” she said.
Over the past two decades she has witnessed many transformations of people embarking on education for the first time or those returning to education.
“I have been blessed to work with such a great team of guidance counsellors. It was through this process of people meeting with these guidance counsellors, I was able to witness the potential, courage and tenacity of the people of Donegal.
“Lives have been transformed by the chance of returning to education and the intervention of the ETB Guidance Service. Nothing gives me more joy than when clients return to share their ‘end’ journey with us, be it on a personal level, employment or higher education,” she said.
“I have also had the privilege of working with our new Irish Communities, and I am always full of admiration and compassion when I hear their stories of being displaced from their homelands and embark on their new journey in Ireland,” she added.

Difficult times
During the most difficult times like the recession in 2008 and this current pandemic, returning to education has had and can have a life changing impact on a person’s life. It instils such hope in times of crisis.
“We have had many people who, through word of mouth, want to explore education as they have been inspired by a family member, friend or someone they know who previously engaged with our service.
“Further Education and Training (FET) is for everyone, and I would encourage anyone considering a return to education to take that first step. Don’t think of the time it will take, as time will pass anyway, make that time now!”
As information officer, Rose helps to organise the annual Further Education and Training Fair. The FET Fair in January 2013 remains a particular highlight.
“Jim McGuinness was the guest speaker and spoke of his own journey returning to education through the ETB. The whole of Donegal were all still euphoric from the 2012 All Ireland victory, and those in attendance were hugely inspired by Jim and his achievements.
“As cliché as it might sound every day was a joy in my role. I never seen it as work and was lucky enough to get paid for the privilege. It gave me a great sense of meaning and purpose both professionally and personally and for that I will be eternally grateful,” she said.
She paid tribute to her colleagues Deirdre, Mairead, Eileen, Elena, Sean and Dearbhla, and all in the FET Service.
This next chapter is bitter sweet for Rose, as while she is blessed to have a wonderful family, her husband, Packie, is not here to enjoy the journey.
“Packie passed away after a very short illness in February 2015 and it was a very difficult time.
“Packie and I had such great plans for retirement. Now it will revolve fully around my daughter and son and their beautiful families. I am blessed with five very special grandchildren who I intend to spend time with and waste it wisely,” she added.
“I’ve booked to take kayak lessons at Gartan as I want to be hands-on with the grandchildren. I’m usually the one sitting on the sand waving them off but I’ve even bought a wetsuit. I’ll be alright,” she laughed.
“I’ve been lucky to have met people from all walks of life and I’ve watched their progression with great pride. Nothing gives me as much joy as when people came back in to tell me how they’ve got on.
“I remember telling one nervous lady to visualise herself graduating the first day she came in to us with her fears and apprehension. Years later I received a lovely card with a picture of her graduation inside. She said that my words of encouragement stood to her and she went further and further into her journey.
“It’s been such a privilege to be a small part of their story,” she said.