DON’T try and climb the ladder and break the rungs behind you so nobody else can get up. Reach out your hand and always offer a helping hand.”
The advice comes from well-known Letterkenny businessman George Boal when asked about the secret to his success.
A few days have passed since Mr Boal (82) learned that the Mountain Top Roundabout, adjacent to his home, is to be renamed after him in recognition of his massive contribution to job creation in the area.
“It’s a feel good feeling to get a roundabout named after you and a wee plaque put up. It was quite a tight struggle at times but it all worked out good,” he said.
While luck plays its part in all successful business ventures, foresight would also play a key role in the development of the Mountain Top complex.
“Thousands of very smart men had passed between these two swamps over the years but never saw the future. It was on top of a mountain and even though it was a bog I knew that you wouldn’t have to go down too far until you hit rock,” he explained.
A farmer’s son, George served his time in James Johnston and Sons and had started a small roofing business by the time he married Rebecca Jane (Betty) Spratt on December 19, 1962. Their home was a 14ft, four-berth caravan, on an exposed site at Mountain Top.
First Christmas
“We spent that first Christmas together there and remained living in the caravan until the following June. My God it was really tough but I was so lucky to have such a good woman by my side,” he recalled.
The site his temporary home stood on was around half an acre but it was only for sale on the basis that George purchased the adjoining five acres of bog, water holes and rock for £45.
“It was £30 for the half acre and £3 an acre for the rest of the land that had millions of frogs and lizards in it. Today, there’s still a six foot strip to the rear of the warehouses where frogs continue to spawn as they were here long before us,” he said.
After building the family home, George continued other building work until the mid-seventies when he got the idea of going into the precast concrete business.
“I was always keeping an eye out for openings – something that Letterkenny didn’t have – and that’s where the precast concrete idea came from,” he said.
Before long, Pinehill Concrete Products were supplying sills, lintels and kerbs to every corner of Donegal.
The next niche in the market was for diggers, JCBs and track machines and before too long George had bought a low-loader to transport the machinery from site to site.
However, it was while watching a 40 foot lorry trying to reverse at Dillon’s Supermarket with the assistance of the gardai which gave George his best business idea. 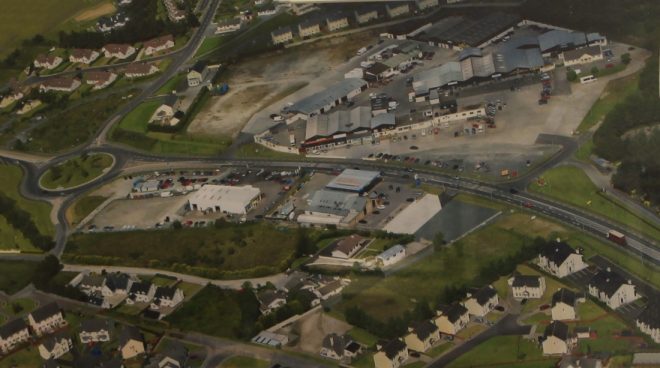 Warehouses
“There were no warehouses in Letterkenny at that time – apart from an old shed at the Port Bridge where Roulston’s stored their coal.
“I explained my idea to the architects. I wanted two big units – 4,000 sq ft each – together with office space, a canteen and toilets which left us with a total floor area of 9,700 sq ft which was a massive building at the time.
“No sooner had we it finished than someone from Telecom Eireann arrived up here. They were looking for a bigger yard as they had been operating from the Back Road. He asked how much a square foot and I said £1 which meant I got £9,700 for the entire building.
“He said that it would have cost him £4 in Dublin and Cork and £3 in Galway but to make it up for the cheaper rent he asked me to charge him for half-an-hour’s work every time my fork-lift lifted a spool of cable onto or off one of his trucks,” he said.
“I soon purchased another five acres and began building the other warehouses that are here today and at a later stage I bought land across the road. In total now there are 45 units, including Highland Radio, with a few hundred people employed altogether,” George said.
In those early days of the precast concrete business, George employed a lot of young local lads including Ciaran Brogan.
“Councillor Brogan was one of those who started working with us, unscrewing the bolts from the moulds. I’m delighted to say that today many of them have gone into business for themselves,” he said.
Fingerprints
It was Cllr Ciaran Brogan who brought the proposal to Council last week after his father, Phil, suggested it was a very good idea.
He said Mr Boal had massive foresight to set up Pinehill Industrial Estate and create so many different units.
“He has his fingerprints over many developments in the area,” he added.
The motion was seconded by Cllr Kevin Bradley who said in 1999 he went to George Boal before setting up Highland Bakery and said only for him it wouldn’t have been possible.
Named Letterkenny Business person of the Year in 2004, George Boal is delighted with this latest accolade.
“It doesn’t matter where you start out from it’s where you’re aiming to go. Set a goal for yourself in life. It can be achieved,” he said.
What goal did George Boal set out to achieve more than sixty years ago?
“To make a way through that bog and to get out as far as the Calhame Road. When we started out the Mountain Top was a bypass but it’s become such an important part of Letterkenny that the Boundary was extended out beyond us at the roundabout,” he added.
“We had the whole gateway to the west on both sides of our property. Letterkenny was only ever going to expand. It was hard going but it worked out and there’s a good ending.
“Over the years a colossal amount of money in rates has gone to Donegal County Council out of a swamp with many millions more going to the Revenue Commissioners. I suppose it is a success story,” he said.
He paid credit to the late Joe Quirke, manager of the Bank of Ireland, who took a gamble and lent him money at a time when others refused. “He was willing to take a chance,” he said.
George and Betty have three children, Drew, Richard and Gavin. Today, the two boys look after Pinehill Industrial Estate.
George says he would pursue to same route if he was to start out in business again.
Advice
“My advice to any young person would be to serve your time and learn a trade – become a plumber, electrician or carpenter – because you’ll be as valuable as what a doctor is in years to come.
“There’s very few places any more where you can send a young person to learn a trade.
“I’ve no regrets. I’ve a very good woman who stuck by me in tough times. It was quite emotional news to get. It was very nice.
“At least when I’m dead someone will be able to tell the story about how the roundabout got its name,” George added.