A forty-year-old Massey Ferguson tractor is back on the road in a poignant salute to its original owner.

John, who had Alzheimer’s, passed away in November just a week after the restoration job was complete.

The tractor, a Massey Ferguson 65, had lain under a bush at the Robb’s home in Drummucklagh for a decade before Alan decided to resurrect it.

He gathered up the remnants and transported them to a shed lent to him by his uncle James Robb. There he spent much of last year stripping the rusted and broken vehicle before bringing to back to life.

“The tractor is originally from Scotland and it was bought by my father 40 years from Sammy McGee’s in Raphoe,” said Alan.

“My father used to grow corn and potatoes so he would have used it for that. It was originally a Mark One engine but about 25 years ago my father put a Mark Two engine in it.

“Then about ten or 12 years ago my father was diagnosed with Alzheimer’s and the tractor lay under a bush at the back of the house for years.

“When I took it on it was in rough shape, that’s the only way I can put it. But I stripped it out completely. The crown pin was out, the back axel, the whole lot. I put in new brakes, a new hydraulic pump, a new battery box and repaired the main chassis. Now it’s shining again.”

Far from a stranger to tractors, Alan Robb was the organiser of a 2014 world record breaking event which saw 800 Massey Fergusons assemble in Burt. 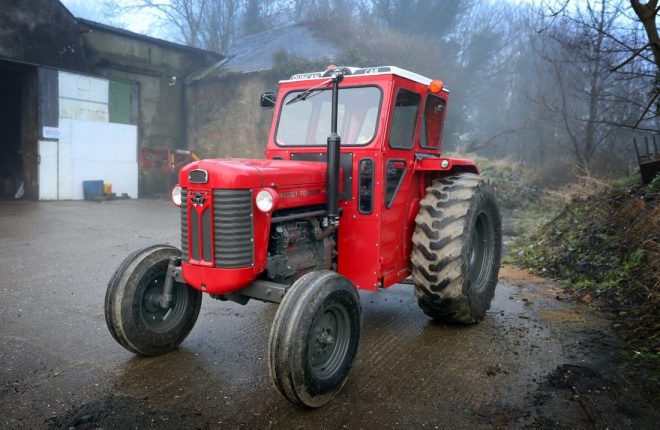 A thing of beauty…The Massey Ferguson was stripped to its bones and completely rebuilt. It will be displayed at agricultural shows and might even get an airing at a few tractor shows.

But the restoration of his father’s old vehicle was particularly special, he said.

“I wanted to do it because it was my father’s. I had it done up a week before he passed away on November 23. My mother, sister and two brothers have all seen it and they are delighted.”

The newly revived machine will be displayed at vintage shows and might even get a spin out during one of the many tractor runs held in Donegal during the summer months.

“She’s too good to leave in the shed,” said Alan.

And as it has been for four decades, the tractor will remain in the family.

“It’s going to the nephew, Adam Edgar. He’s only three but he’s already mad about it. He’ll have to wait a few years yet but it’s a family heirloom and it’ll pass on to him eventually.”