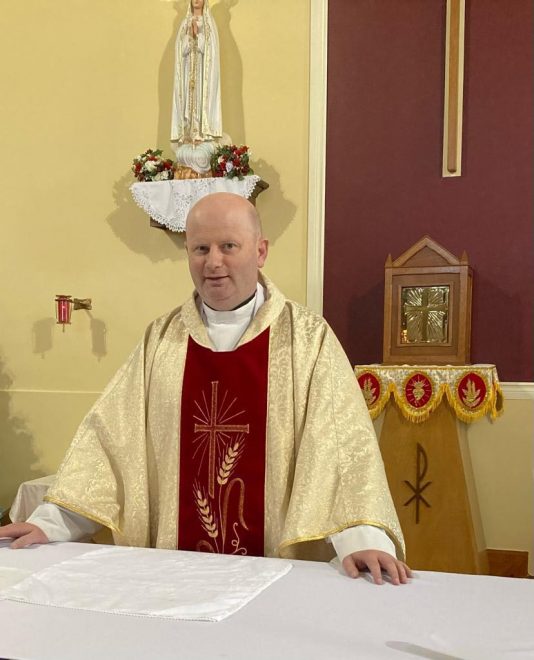 THE pressures of leading the people of Leitirmacaward and Doochary through the pandemic has kept Fr Adrian Gavigan busy for much of the past year.
A native of Glenties, Fr Gavigan (44) was the first priest in the Raphoe Diocese to organise a car park mass last summer. The mass, held in the grounds of St Bridget’s Church in Leitir, accommodated parishioners amid tight Covid-19 restrictions limiting mass attendance to 50 people.
Fr Gavigan also helped put in place a home delivery service and call centre to ensure that contact was maintained with the elderly and more vulnerable members of the local community throughout lockdown.
He is currently working with a group of 14 teenagers and their parents, via WhatsApp, in preparation for Confirmation which has been pencilled in for the last weekend in April.
Fourteen is also the number of children who are due to make their First Communion on the second week in May.
“We’re not there yet but we’re starting to see the light getting a little brighter at the end of the tunnel where we might get back to some kind of normality. We all need to be more connected in a physical sense again,” he said.
The priest is also preparing for the Easter season and remains hopeful that church doors will soon be reopened to parishioners.
Fr Gavigan admits that there has been plenty of ‘highs and lows’ since he said mass to an empty church last St Patrick’s Day.
“It was just me and the sacristan. We’re weren’t online at the time as it all happened so quickly.
“Twelve months before that we had a full church. It was demoralising. At least now we’re on Facebook and there’s lot of people tuning in every day and we’re getting plenty of feedback from them too,” he laughed.
One of the big positives to emerge from the pandemic has been the ability of small, rural communities to come together as one.
“Local people really put their hands up. You saw that with the delivery service and the phone calls. They really have looked after one another – especially the elderly who were cocooning and very afraid at times last year. The vaccine is giving everybody a little hope,” he said.
Weddings have all but vanished but, unfortunately, death and funerals remain part of parcel of everyday life.

“I celebrated two weddings last year when, normally, it would be around eight to ten. There’s only one in the diary so far this year as many have put their big day back to 2023. They’ve all been scarred, and scared, by recent events.
“The restrictions have meant that attendances at funerals have been significantly curtailed and people have not be able to ask neighbours or family members into their homes to mark the death of a loved one as they usually do.
“At the very early stages of lockdown last year I was praying with families online. They were in the house with the coffin while I was saying the rosary online or over the phone. It was a very tough time.
“I’ve had four funerals in the last month and we’re trying to organise Month’s Mind masses at the moment and that too is hard. It’s also difficult cutting the numbers down to ten (those who can attend the funeral service) but we have to stick to the rules,” he said.
For a period last summer, Fr Gavigan was able to resume home visits but, again, that practice has had to stop since before Christmas.
“I have 35 to 40 elderly people on my list and I ring them every month to make sure that that they don’t feel forgotten, both spiritually and physically,” he said.
As chaplain to Rosses Community School, Fr Gavigan is also very conscious of the difficulties facing younger people.
“It’s important that everybody stays connected – both young and old. The younger ones are all missing their friends, socialising and their sport. It’s important that we stay as safe as we can but we also have to try and live – not just exist. We can’t cancel everything. It’s important that we have plans,” he said.
Those plans include Confirmation and First Communion, ceremonies which Fr Gavigan will hold in St Bridget’s Church.
“The Bishop isn’t coming to Confirmations this year. We’re doing them ourselves. We have 14 for both and we hope to split them into two groups if we’re allowed 50 people into the chapel. Otherwise, we’ll be forced to push both events further into the year,” he said.

A keen golfer, Fr Gavigan also enjoys football. A typical weekend this time last year would have involved a round of golf, going out to watch a live game of football and saying mass in front of parishioners.
“I’ve had to make a conscious effort to try and figure out what gives me happiness in the midst of all this too. With more time on my hands I got the opportunity to focus on and deepen my own personal prayer life which sustained me and has kept me grounded.
“I enjoy making house calls and I’m always on the go. I was never at home but the pandemic has allowed me time to take stock. It has slowed me down. I think we’re all not quite as busy as we were twelve months ago.
“There have been many positives in the negative that is Covid. We’ve had to do things differently but I wouldn’t like to think it will be the new norm.
“The pubs are closed, there’s no football and in a small, rural community there’s very little else. At times like this it is the church which helps to keep the flag flying in the community.
“While we’re not physically able to get into the church we’re still connected. The community has really stuck together,” he said.