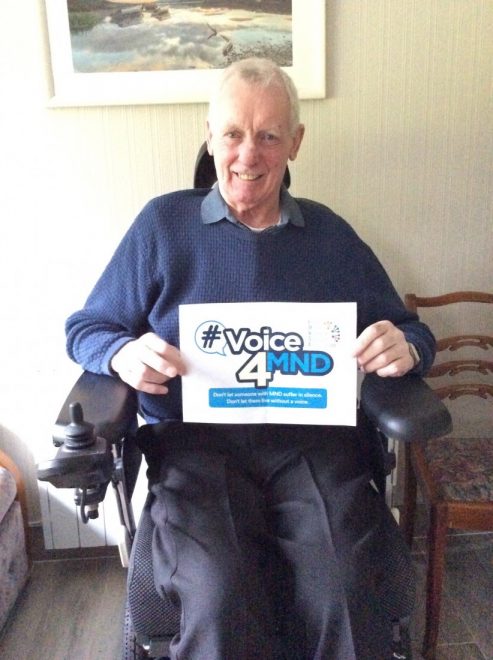 IN March 2017, Charlie Boyle received news that almost nothing can prepare you for – he was told that he had motor neurone disease (MND).
It kills a third of those who have it within a year, rising to a half by the end of year two, with no known cure. MND is often referred to as the 1,000 day disease as most people die within 1,000 days of being diagnosed.
The diagnosis devastated Charlie (72) but with great help and support from family, neighbours and friends he continues to live independently in Gartan.
“I’m coping. I had a few bad days when I was first told (diagnosis) but you just have to come to terms with it and try to get on with life.
“Like all diseases there’s different variations and mine is a slow burner. I’m not too sure if that’s a good or a bad thing to tell you the truth because it brings you down slowly. It’s not a great place,” he said.
A former IAWS employee, Charlie worked as a storeman and lorry driver before going out of the road as a sale representative for the Letterkenny-based company.
In later years he was a bus driver in Glenveagh National Park while he is also a sheep farmer.
A keen set-dancer, Charlie knew that something wasn’t ‘quite right’ for some time before Professor Orla Hardiman, consultant neurologist, formally diagnosed MND in 2017.
“My co-ordination had started to go in my feet. I just couldn’t get it right when I was dancing. That was the first thing I noticed. If exercise was any good for me I wouldn’t have had a problem. I’ve sheep on the hill and I was an active man,” he said.
More than 80% of people living with MND will experience some form of speech difficulty during their illness – some will lose their voice completely.
“I noticed my voice has got weaker but, thank God, it’s still working okay. I got a motorised wheelchair two and a half year ago but tried to stay out of it for as long as possible.
“Last year I fell a few times and, eventually, my legs became too weak. The wheelchair is important for me now,” he said.
Recalling his meeting with Professor Hardiman, Charlie said he was not prepared for what he would be told.
“That was a bad day. It was the biggest shock of my life. I had been told beforehand that I was lucky getting an appointment with Professor Hardiman as she’s among the best in the world. Never for one minute did I think she would tell me that it was motor neurone disease. I was hoping that it would be treatable.
“I had problems with my legs first but it’s in my arms and fingers now too and I’m starting to cramp up. I’m eating smaller amounts and I’m losing a bit of weight,” he said.
Throughout February, the Irish Motor Neurone Disease Association is running its sponsored silence campaign #Voice4MND.
Over the weekend, Charlie’s niece Sarah and nephew Paddy, and their extended families took part in the fund-raising and awareness campaign.
“They did it off their own bat and I didn’t know they were doing it until quite recently although I’m not sure if Paddy was able to keep quiet for that long,” he laughed.
“It is just another example of the good will and support that is out there for me. I’m so grateful,” he added.
“Eithne (Cawley, the MND Nurse for Donegal) is always at the end of the phone to offer any advice or to answer all kinds of problems that come with this. She has a lot of experience and offers good support as well,” Charlie said.
“The last time she called in to see me she said that my blinking was good and that I hadn’t lost weight but I can see from the photo taken for the MND campaign last week that I have,” he added.
Level 5 restrictions mean that Charlie doesn’t get to leave his house these days but a recently acquired iPad, together with the television and local newspapers ensure that he’s up to date with events – both local and national.
“I never did Scrabble or crossword puzzles but I’m into them now and I really enjoy doing them on the iPad,” he said.
Home help, carers, family and neighbours work together to make sure that Charlie is kept safe and comfortable at all times.
“Everyone has been so good to me. I don’t want to start naming names in case I leave somebody out but they all know who they are. I’ve a great team behind me. Thank you,” Charlie said.
To sign up for the Sponsored Silence just visit www.imnda.ie and fill out the online registration form.
You can also donate to the campaign by texting MND to 50300 to donate €2 (100% of text goes to IMNDA across most network providers. Some providers apply VAT which means a minimum of €1.63 will go to IMNDA. Service Provider: LIKECHARITY. Helpline 076 6805278).