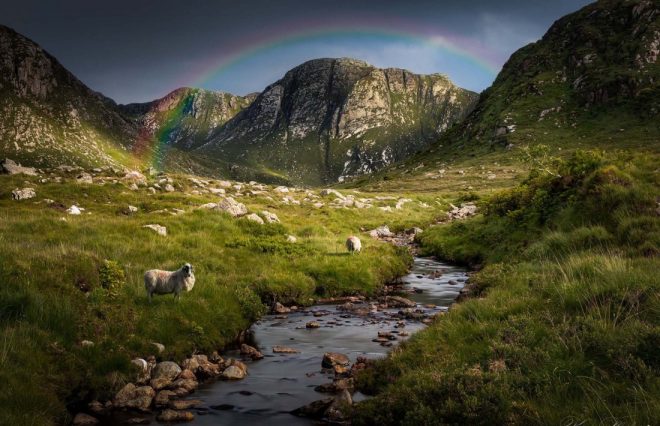 ONE of the most famous landmarks in Donegal is the old church ruins in the ‘Poisoned Glen’, or are they sitting in the middle of the ‘Poison Glen’?
Referred to as the ‘Poisoned Glen’ in an official tourism brochure promoting the county, the stunning area at the foot of Errigal in Dunlewey is also called the ‘Poison Glen’ in a number of other publications.
Locals say the glen was originally known locally has Heavenly Glen, but due to an error made by an English cartographer, it was incorrectly translated from the Irish language name to Poisoned Glen.
Donncha Ó Baoill, Development Executive, Údarás na Gaeltachta, put the confusion over the name down to both the Irish and English language influencing each other.
“It is spelt Poisoned – that is the official English name for it – but it comes from a crude translation of the Irish name which is Cró Nimhe.
“Cró is a sheltered place. It’s a common place name, especially in south Donegal, and usually describes a sheltered place between two mountains.
“This is what this glen is – a heavenly place sheltered between two vast rock faces. The story goes that Niche means poison and Cró means Glen.
“Tradition is that Ludh Lamhfada – or Ludh of the long arm – killed his grand father Balar here by piercing his evil eye and the blood from the eye flowed down the Glen and poisoned it – thus Poisoned Glen and that the blood flowed all the way down to Bloody Foreland (Cnoc Fola). It is also said that since that event no bird has ever sung in the Glen,” he said.
Mr Ó Baoill, who sits on the Board of Irish Place Names, said that Cró Nimhe (Poisoned Glen) is probably the most accurate translation.
“The interesting thing with Irish place names is that no maps came with the English colonial expansion so the way people remembered things was through stories.
“With the Anglicisation of Irish names some spellings have actually changed and sometimes new forms creep in. If you take the Rosses in West Donegal, for example. In Irish it’s Na Rosa, but people often spell it with the second ‘s’ now.
“Another good example are the islands. The beauty of the Irish language is that place names are often kept to one word. Now islands like Toraí are being referred to as Oileán Thoraí (Tory Island), which again comes from the English language influence. In the case of Earagail, it has probably also become fashionable to refer to it as ‘Mount Errigal.’ But the fact remains that the proper name is An Earagail (Errigal).”