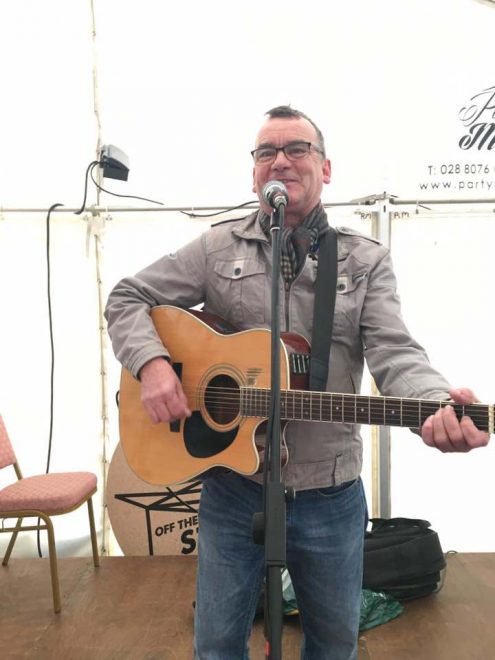 A CHARITY Christmas song is spreading the festive spirit whilst also fundraising hundreds of euro for the Donegal Women’s Centre.
Well known Letterkenny musician Martin Orr has released an original Christmas song to get people in the holiday spirit whilst raising money for an organisation close to his heart.
So far, Happy Christmas has raised more than €1,000 for the Centre in Letterkenny that has seen a surge in contact to its service in recent times.
Written by his sister, Eithne, and recorded in John Dolan’s Studio, Martin says the CD has been released to let the women using the service know that they are not alone.
“I read a piece in the Donegal News which said that the service was bracing itself for an influx of telephone and e-mail contact and I felt that I had to do something,” Martin explained when asked where the idea had come from.
“There’s many men who consider themselves to be fine, upstanding members of the community – both here in Letterkenny and across Donegal – who aren’t very nice to their wives and partners at home,” he added.
A former manager of Eddie Dune’s DIY shop in Letterkenny, Martin is now a full-time musician. He is singer and guitarist with the Honky Tonk Heroes.
“Before the pandemic we played in the Voodoo on a Sunday evening and the Orchard on A Wednesday evening with gigs elsewhere throughout the week. These are strange times but we’ll be back playing live music once more in the not too distant future,” he said.
“My sister Eithne wrote the words and I then added the tune. I’m only too delighted to do what little I can to help out,” he said.
A well-known fund-raiser, Martin led a night in memory of Seamy Peoples, with all proceeds going to Pieta House, while he’s also organised a number of events in aid of the Donegal Hospice.
The CD, priced €5, is available in Costcutter in the Cil an Óir Complex, Glencar Spar, NCF Fuels, Pearse Road, The Women’s Centre, Port Road and Whoriskey’s Eurospar in Ramelton.