CAMPAIGN group ‘Into The West’ has met with the Republic’s Minister for Transport and the Environment, Eamon Ryan TD, to discuss improved rail provision for the north west of the island.

The meeting was facilitated by the Donegal branch of the Irish Green Party, which Minister Ryan is the national leader of.

Among the topics discussed were a new rail service from Derry to Letterkenny; extending that service through Donegal to Sligo, to connect with the proposed Western Rail Corridor and a new direct rail line from the north west to Dublin, via Strabane and Tyrone. Minister Ryan expressed interest in the possibility of rail being restored to Letterkenny, as well as having a direct route to Dublin – and confirmed that he is working with Stormont Infrastructure Minister Nichola Mallon on a comprehensive review of the rail network across the island.

Into The West was founded in 2001 to campaign against a Stormont decision to close the Derry-Belfast railway line west of Coleraine. Since then the group has successfully fought for an hourly service between Derry and Belfast, as well as for a new train station in the city’s Waterside. The group is now lobbying for further feasibility studies into restoring rail from Derry to Letterkenny and from Derry to Portadown (via Strabane and Omagh). 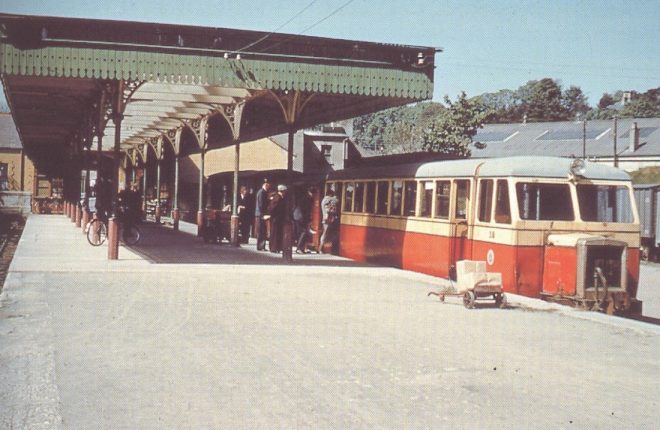 When trains ran in Donegal…It’s some 60 years since a railway carriage chugged its way into a station in the county.

Into The West Co-Chair, Steve Bradley, said, “We are grateful to Minister Ryan for giving us the opportunity to make the case for improved rail provision in the north west. Our region is the forgotten corner of the island when it comes to infrastructure, and Donegal and Tyrone have been left without rail for decades.

“Whilst there is much to do before any firm commitments can be given, the Minister reacted positively to the case for a new commuter rail route from Derry to Letterkenny, and to the possibility of a direct route to Dublin from Derry and Letterkenny. Such a service would run via Strabane and Omagh and would really help bring the region together physically.

“We also discussed our longer-term ambition of extending rail from Letterkenny through Donegal to Sligo, to connect with the proposed new ‘Western Rail Corridor’. That project seeks to create a direct rail link between Cork, Limerick, Galway and Sligo. By adding Letterkenny and Derry  you would not only connect every main town in the western half of the island by rail – you would also create a necklace of rail linking every key population centre in Ireland : from Dublin up to Drogheda, Dundalk, Newry, Lisburn and Belfast ; west to Derry and Letterkenny ; south to Sligo, Galway, Limerick and Cork : and then back up to Dublin via Waterford and Rosslare Europort. It would be a game changer for the island’s economy and connectivity, and a huge asset for Irish tourism”.

With the EU declaring 2021 as ‘The European Year of Rail’, Into The West is keen to see feasibility studies into returning rail to Strabane and Letterkenny taking place next year.