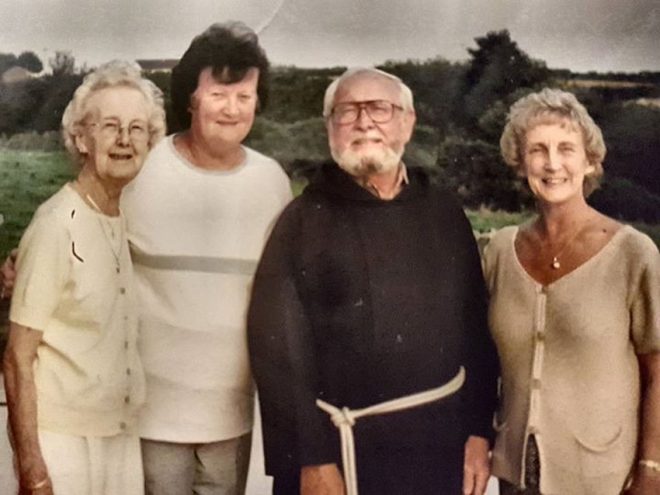 An eighty-nine year man who have walked more than 1,000 mile around his small house and garden since lockdown has been plotting his progress on his map of Donegal.

Peter Cooke lives alone in Whitley Bay in the North East of England. He has made a circuit in his house (86 laps to 1 mile) and garden, and walks hundreds of laps each day recording his mileage on his iphone.

Having watched his daughter-in-law’s progress, Peter said, “I could do that” and he did!

He was particularly interested as his late wife Angela, who died just under two years ago, grew up in Rathmullan, so he has many happy memories of Donegal and many of the places on the virtual route.

Angela Kathleen Rocks grew up in Rathmullan. She was born in 1934 in Ballyshannon. She was one of 11 children. Her brother Father Thomas Rocks, a Capuchin Priest based at Ards, Creeslough passed away in 2005.

Her parents Joseph and Winnie Rocks along with her brother Noel and sister Renee are all buried in Rathmullan cemetery.

Angela moved to Manchester when she was in her late teens to train as a teacher and never went back to live in Donegal although the family have all been back many times for holidays.

It was in Manchester that she met and married Peter and from there they moved to Whitley Bay where they had two sons, Stephen and Martin and where Peter has been based ever since.

The Rocks family have since moved all over the world to Manchester, Newcastle, Dublin, Los Angeles and Hamilton, Ontario and Melbourne Australia.

Speaking this week, Peter said Donegal has particular meaning for him as it was where his late wife Angela was born and grew up.

The unusual thing about Peter is that except for one outside walk, he has not left his house and garden since the beginning of March when the government instructed everyone in his age group to stay at home and shield because of the pandemic.

“When Lockdown started I decided to exercise by walking around a circuit in the house.
When my daughter in law, Andrea, told me that she was taking up a Club Walking Challenge I thought that I would do the same,” he said.
Peter entered the Wild Atlantic Challenge – which was to complete 500km within three months starting on 1 June – and he completed the challenge in 41 days by walking entirely indoors. The most he has achieved in a day so far is a half marathon – 13.1 miles.

At the end of each day Peter sends a screenshot of his apple health data to Andrea and she uploads his mileage onto his Strava account.

“He is miles ahead of me and we think he is inspirational for 89! He is so enjoying the challenge and it has given him a real focus during lockdown which could otherwise be quite an isolating experience for him,” she said.

Having reached 1,000 miles, Peter has now set a new challenge of 1,500 miles by his birthday – December 30th. He is raising money for cancer research and has set up a Just Giving Page.