Advertisement
HomeBreaking NewsLifford preparing to switch on for Christmas
Advertisement

LIFFORD is to have its first Christmas lights switch on in years.

The lights are the result of a fundraising campaign by the recently formed Lifford Clonleigh Community Collective Group (LCCCG). In a bid to bring some cheer to the area following months of lockdown misery, the group set up a GoFundMe page to pay for the Christmas decorations. It brought in over €1,300 which enabled the LCCCG committee to buy lights and organise a switch on, something group chairperson Donal Grant says has not happened in Lifford in years.

“It must be 15 or 20 years since we had Christmas lights in Lifford. No one knows exactly when we had them last and I don’t recall the town ever having had them,” said Donal.

The festive lights campaign began earlier this year with an online concert by local musicians Fearghal Mac Lochlainn and Jim ‘Farmer’ Harte. It set the ball rolling and encouraged local businesses and residents to get involved.

The response to the illuminations appeal and to a further drive to keep the community collective going has been phenomenal.

“It was as much about getting through Covid and the lockdown as it was about Christmas lights,” said Donal Grant.

“It was about how we could brighten up Lifford and how we could bring about a bit of community spirit. The kindness shown has been crazy and far more than we ever expected,” said Donal. 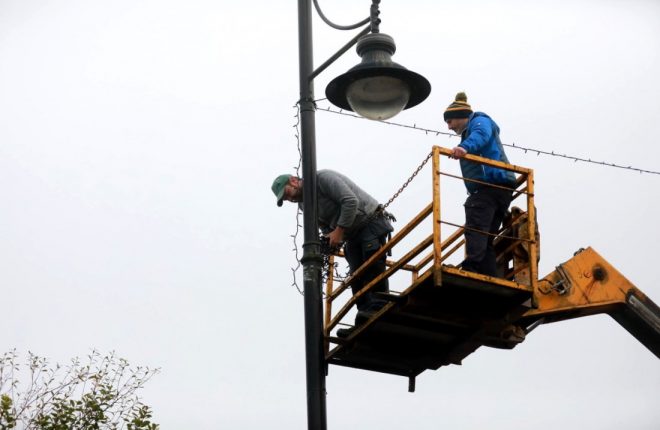 Scaling the heights to make it a brighter Christmas in Lifford.

So successful has the fundraising campaign been that an agreement has been reached to keep the meals on wheels service, introduced at the beginning of lockdown, running indefinitely.

“We recently dispatched our 5,000th meal and we have decided that the meals on wheels is for life. We have seen over the past few months that the need is there and the amount of donations we have received gives us the capacity to keep going.”

Economically few towns have been hit as hard as Lifford in recent years. The LCCCG has plans to turn the tide by introducing a new music festival and getting the area back on to the radar of the Tidy Towns judges.

“We will be asking businesses to donate but no pressure because we know how much of a struggle it is at the moment,” said Donal Grant.

Among those to brave the chill ahead of the first switch on in years were Pappy McNamee, Dermot McCrory, Kevin McBrearty and Stephen Martin. Also key to making the project a success has been Chris McGrath of Abbey Electrical. 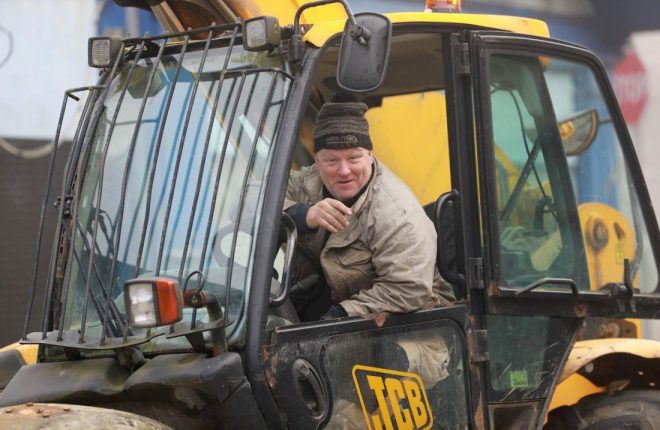 Stephen Martin who lent a very welcome helping hand from behind the wheel.

“We had plans for a proper switch on and we were going to the schools involved and so on. Obviously that can’t happen now and it will have to be a virtual switch on. But it will still be a switch on and for us, this is only the beginning,” Donal added.

A date for the switch on has yet to be firmed up. The date will be cemented in tandem with Covid restrictions, keep an eye on the Donegal News for further details.