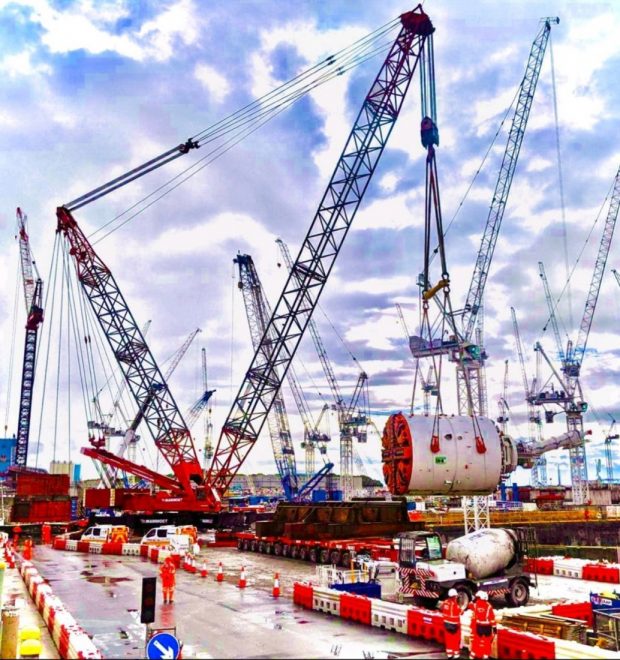 THE developer behind a new multi million residential and commercial development in Donegal Town has vowed that as many local companies as is practically possible will be involved in the project.
Valued at over 10 million euro, the project which includes over 80 dwellings, a leisure centre with a swimming pool and office and retail space on a 17 acre site was given the green light by Donegal County Council earlier this year.
More than four years have passed since work first started on clearing the site at Mullans and Doonan just off the N56 on the Mountcharles side of Donegal Town. The site is being developed by Carnvalley Holdings Ltd., a company operated by Ardara man Tommy Gallagher.
Glebe Builders began pre construction at what is known locally as the Blás Roundabout, Donegal Town this week. Phase 1 construction of 15 mixed A rated residential homes, designed by William Donohue Architects, will be launched early 2021.
Based in London for almost half a century, Mr Gallagher is the proprietor of T.G. Tunnelling Limited – one of the most highly respected companies within the industry.
Speaking to the Donegal News Mr Gallagher admitted that it had been a ‘long, hard road’ to get the project to this stage.
“A lot of hard work has already gone into the site over the past five years. We had to put in place the infrastructure first and we’re thankful that construction work is now underway,” he said.
Tunnelling is hard work in high temperatures, with plenty of noise and dust but the rewards are good. Mr Gallagher started digging ‘by chance’ with the development of power stations in the north of England. He quickly mastered his craft and, over the years, has taken on jobs across the world.
“There wasn’t too much around when I left Ardara in the late sixties. Work was scarce. We were small farmers and there wasn’t room for us all,” he recalled.
He started work in the Midlands and then moved up to the north of England following the construction of the power stations before eventually coming to London in 1970 where he has been based since.
“I was steel fixing. One night in the pub after work one of the lads asked me what I was doing up on top of a skyscraper in Hartlepool, County Durham, in the freezing cold. The following day I joined him on the ground and the rest as they say is history,” he laughed.
At that stage there was only one TBM (tunnel boring machine) in the UK and it travelled around from power station to power station.
“It was a completely different game back then. Now they’re making new TBMs every day of the week. They’re all automated now too,” he said.
Over the years Tommy and his crew have helped to build the Dartford tunnel, the Jubilee Line extension, the Channel Tunnel as well as the metros in both Hong Kong and Singapore.
The Company has been particularly active in the UK and Irish Republic in recent years. The volume of work required TGT’s dedicated and skilled work force to rise to over 900 people across all projects.
Currently, he has men clocking in at Europe’s biggest construction site for Balfour Beatty – Hinkley Point C nuclear power station near Bridgewater and have just began to mobilise on the HS2 project in Maple Cross where there will be constructing two 16km tunnels which are the longest tunnels on the section. They are working for the ALIGN JV here which consists of Bouygues, Sir Robert McAlpine and Volker Fitzpatrick.
“We’re always kept going. We don’t advertise our work much,” he said.
While much of today’s mining and tunnelling work is done through highly skilled, specialised, and expensive equipment, there’s still room for the man with a shovel!
“The newly-constructed step-plate junction that connects the existing Northern line tunnels to the extension at Kennington station was a unique job. It was all dug out by hand. That’s the reason they got us to do it. That art is dying away but there’s still places in London where they can’t get TBMs down there.
Last year, Tommy Gallagher, Tony McFadden, Josie Gallagher and Dermot Kane unveiled a monument to the Tunnel Tigers in Dungloe whom unfortunately died working in the tunnel environment around the world, the monument was put there so their family’s can have a place to come and pay there respect.
While each job presented with it a new set of circumstances, Tommy said that he really enjoyed his four years working on the Channel Tunnel.
“My motto is simple: You’ve only ever as good as your last job so let’s make sure it’s a good one. I’ve had the core of my workers coming from the County over the years, If a local man is looking for a start you’ll always put him to work if you have anything going. You have to look after your own. It’s the way we all started off ourselves lest we forget,” he said.