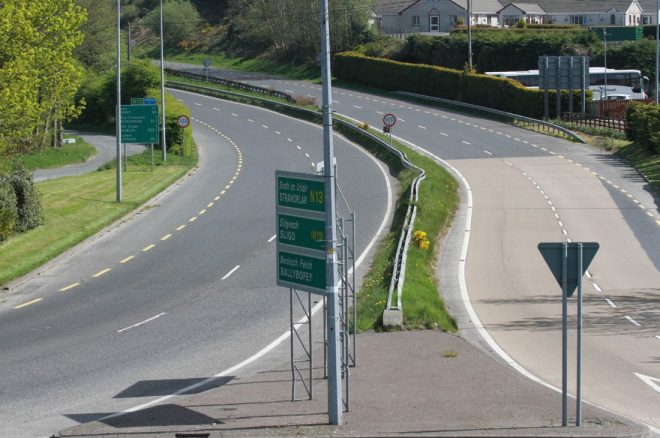 THOUSANDS fewer journeys are being made on Donegal’s roads as restrictions to curtail coronavirus have been ramped up in recent weeks.
Donegal moved to Level 3 on Friday, September 25 – initially for a three-week period – with pubs, restaurants and cinemas being forced to close their doors once more.
As part of the restrictions, people have been asked to stay in Donegal apart from work, education and other essential purposes.
According to a Donegal News analysis of figures from Transport Infrastructure Ireland, formerly the National Roads Authority, car journeys in Donegal reduced by between 20 and 40 per cent on some border roads last week.
Level Three restrictions came into effect in Donegal at midnight on Friday September 25th and in our analysis we looked at Monday’s volumes and compared them with the previous Monday, September 21.
TII maintains a traffic counter on the N13 dual carriageway at Rossbracken outside Letterkenny. It is one of eleven across Donegal.
It showed a 15% drop in traffic on Monday, when 16,730 trips were recorded, compared with almost 20,000 journeys (19,774) on a ‘normal’ Monday a week earlier (September 21).
Full lockdown
However, that’s still more than double the daily trips on that stretch of road (6,792) recorded back on Monday, March 30 after the most stringent restrictions, including the prohibition on travelling more than 2km from one’s home, were first introduced.
On Easter Monday (April 13), little more than 3,000 vehicles (3,050) were on that same stretch of road over a twenty-four hour period with a near perfect split 1,524 travelling eastbound and two more (1,526) making the westbound journey.
Barnesmore Gap
The daily traffic volume on the N15 at Barnesmore Gap, between Ballybofey and Donegal Town has dropped by more than 20 percent since the restrictions on travel came into effect.
On Monday last, 5,990 trips were recorded – a drop of 1,545 on the data recorded on Monday, September 21, before Level 3 of Covid-19 lockdown measures were introduced..
The traffic counter on the N13 at Skeoge near Bridgend, the only such automated system in Inishowen, is also showing reduced levels of activity. Again, it showed that the volume of traffic (6,087) on the road last Monday was down 21 per cent compared to Monday, September 21, when 7,767 vehicles were counted in a twenty-four hour period.
Lifford to Letterkenny
The volume of traffic on the N14 Lifford to Letterkenny road at Drumbuoy is also down almost 20 per cent (19.35). More than eleven thousand vehicles (11,162) used that road on the Monday before the latest restrictions compared with just 9,002 on Monday,
The figures were more pronounced on the N3 between Ballyshannon and Belleek as volumes fell to just 2,998 on Monday, compared to 4,983 the previous Monday, a drop of 40 percent.
There was a 28 per cent reduction on the volume of traffic on the N15 Bundoran to Sligo road at Tullaghan with 5,718 journeys recorded last Monday compared with 7,962 a week earlier.