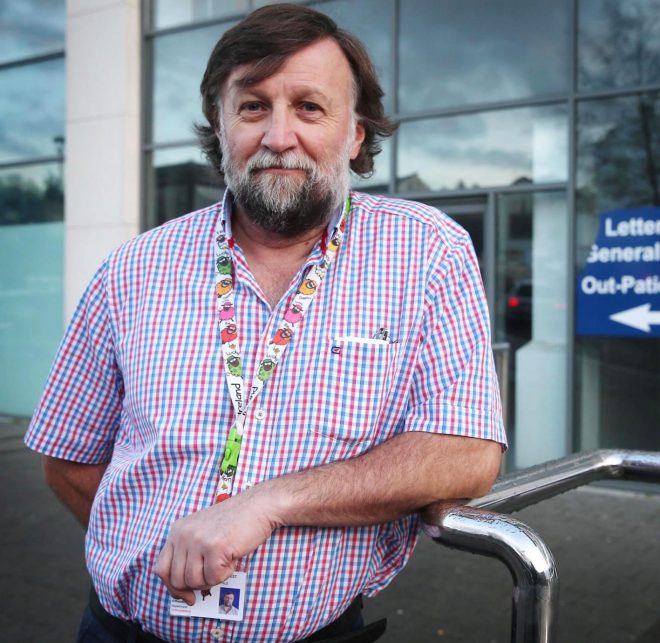 A leading hospital consultant has admitted that the failings of the Health Service left him both frustrated and depressed for much of the past decade.
Mr Peter O’Rourke, a consultant orthopaedic surgeon at Letterkenny University Hospital, recently retired after an eventful twenty-three year career in Donegal.
Unacceptable waiting lists and cancellations have been cited as the main reasons behind his decision to walk away now three years before retirement age.
In an interview with the Donegal News, Mr O’Rourke (62) said he had concerns about the long-term future of a hospital in which a ‘considerable’ number of clinical posts remain unfilled.
“I would loved to have retired with no waiting lists but, unfortunately, that was never going to happen,” he sighed.
When Mr O’Rourke took up the position of consultant orthopaedic surgeon, joining Mr Aidan Lynch and his team in 1997, patients didn’t have to wait too long for orthopaedic surgery.
“I was doing five joints every week as well as some small cases through the Day Surgery Unit but that all changed about ten years ago when the unit started to fill with medical patients,” he said.
Today, there are between 80 to 100 patients waiting for joint replacements and 60 to 80 patients on the day surgery list.
“I’m planning to do some out-patient clinics over the next number of months to try and reduce that list but I won’t be back in the hospital,” he said.
When Mr O’Rourke joined Mr Lynch the pair had one out-patient clinic and one fracture clinic a week each plus 3.5 days in theatre between them and one Day Surgery operating day.
Today, there are four orthopaedic surgeons working in Letterkenny but they have significantly less theatre time.
“The problem is Letterkenny University Hospital increased the number of surgeons it employed but the infrastructure was never put in place to allow them to do the volume of work that they could do,” he explained.
“We have four theatres but effectively only two are in use for planned surgery. One is there for emergency caesarian sections and the other for emergency cases. When I started there were two orthopaedic surgeons, three general surgeons and two gynaecologists vying for planned surgery slots. Now there’s four general surgeons, four orthopaedic surgeons and four gynaecologists using the same two theatres,” he added.
NEW MATERNITY THEATRE

A new maternity theatre, which is expected to come on stream by the end of the year, will free up a third theatre.
“That will effectively increase by fifty per cent the surgical capacity which will make an incredible difference,” he said.
In his time, the field of orthopaedic surgery has changed dramatically. Patients undergoing hip and knee replacements used to spend eight to ten days in hospital post surgery. Today it’s two to three days.
When Mr O’Rourke first arrived in Letterkenny it was home to the first purpose built Day Services Unit in the country.
“Donegal always managed to be inventive and we made the most of what we had. It was brilliant at the time as five or six surgeons were using it but not now when there’s ten or twelve,” he said.
Mr O’Rourke believes that until the HSE takes “ownership and responsibility” Letterkenny University Hospital will continue to struggle to attract permanent staff.
“The high number of locum doctors in Letterkenny is indicative of a service that struggles to recruit doctors and then struggles to retain those that it has recruited,’ he said.
“I know of doctors who have given up pensionable jobs but they are doing so by choice, rather than taking on a full-time contract, because of the generous pay rates,” he added.

Mr O’Rourke made national headlines back in 2009 after an interview he did with the Donegal News was picked up by the national media.
At the time he said that although he was earning €225,000 a year, he had “nothing to do” because of cutbacks. The surgeon said he was unable to carry out elective procedures at the hospital, such as hip and knee replacements, because the hospital had postponed them due to budgetary overruns.
“I had a run-in with the then Minister for Health Mary Harney who suggested that I should use my free time to run extra clinics. I went down to the Hospital Manager and asked him but they had no resources for me to do it,” he recalled.
Mr O’Rourke also renewed his call for the National Treatment Purchase Fund (NTPF) to be abolished. He believes that the funding it receives should be channelled into public rather than private hospitals.
“The Government has probably put more than a billion euro into the NTPF at this stage – money that could have been better used to create infrastructure in places like Letterkenny.
“Instead, the private hospitals are getting bigger and bigger and they’re looking more and more to public hospitals for the additional doctors and nurses they need,” he said.

RETIREMENT
“I’ve decided to go early and enjoy life while I can. One of things people don’t realise is that orthopaedic surgery is hard work. There’s a lot of hammering, sawing and drilling and it takes a toll.
“It’s much easier to go though when you’re fed up with the system. When I was appointed 23 years ago I would have said that you would have had to drag me away kicking and screaming on my 65th birthday but things change,” he said.
A keen skier, Mr O’Rourke has a holiday home in Austria and hopes to spend the New Year on the slopes.
“I’ve enjoyed a great career, working with a tremendous bunch of people who all did their jobs and helped to make it a very good working relationship. I feel very privileged and lucky to have worked with the people I did in Letterkenny,” he said.

COVID-19
The surgeon spent his last six months working as Associate Perioperative Clinical Director as LUH slowly work its way through the backlog of medical procedures postponed as a result of the coronavirus.
All planned surgery had been shut down for three months earlier this year because of Covid-19 with colonoscopies and all screening programmes also deferred due to staff redeployment and concerns over patient and staff safety.
“I didn’t want to leave until things had settled down and structures were in place to allow elective surgery to recommence safely,” he said.
“Letterkenny still needs more beds but I don’t envy the Minister’s job because as soon as they become available they’re filled and it’s very difficult to keep them free for surgical patients when someone else is on a trolley. It’s a no win situation,” he said.
The proposed new Letterkenny Community hospital, which will have 110 beds, should also help.
“It has the potential to make a big difference provided they don’t do away with the other convalescent beds which are already in the system. The great fear is that some of the smaller community hospitals will go by the wayside to make room for Letterkenny. Unless we increase the overall number of beds it will have little impact,” he warned.
In the meantime, everyone is bracing themselves for a second wave of Covid-19.
“The second surge will be worse. We’re now looking at wet, cold weather a time when there’s a lot of chest problems normally. Put Covid-19 on top of that and it will be a lot more severe. The next six months will be very trying for everybody,” he warned.
“Ironically, there were sixty to seventy empty beds in Letterkenny during Covid. Beds were not an issue because people did not want to come into hospital.
“An awful lot of cancers and other things went undiagnosed at the time though and people are more aware of the situation now so I suspect the same fear of going into hospital won’t be there this time around,” he said.