If you were throwing a party and you could invite anyone in the world, dead or alive, who would you ask around? Owen Colgan, Will Smith, James Acaster and Kevin Bridges. It would be some craic.

Where do you like to go out to celebrate after a big victory? Try and make it to most of the pubs during the night and then end up in John Neilly’s. Obviously this was before Covid.

What’s the worst pitch you’ve ever played on? Drumbar

Which character in any film are you most like? Brick from Anchorman

Any odd items in your kit bag? Roll of sellotape

Who’s the biggest joker in the team you play for? Gary Heaney or Peadar Boyle. Two clowns really.

Which team mate has the best looking other half? Some of the lads are punching but I’d say Sean Ó Hara.

Who spends most time in front of the mirror in the dressing room? Definitely Gavin McGlanaghey. He even brings in the beard trimmer.

Who’s the best/worst person to sit beside on the team bus? We usually take cars to games but I know Paul Early and Gavin McGlanaghey do be chatting the ear off whoever they’re beside.

Who has the best and who has the worst diet on the team, and what does it include? I’d say Ruan Reynolds probably has the best diet and Gary Heaney would be the worst. It usually consists of pink gin.

Toughest opponent you have faced? Either Jack Malone who played for Maiden City at the time or Shane Blaney. 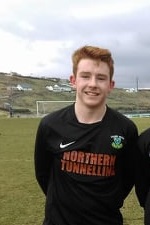 One to forget? Keadue at home at the start of last season

Sporting ambition? Play at as high a level as I can

When you were playing in the back garden, who did you pretend to be? Ronaldinho or Henrik Larsson

If you were in charge of transfers, who’d be in and who’d be out of the team? Wouldn’t get rid of anyone. Would bring Declan Proctor back from Canada and sign Dylan McGroary from Bonagee.