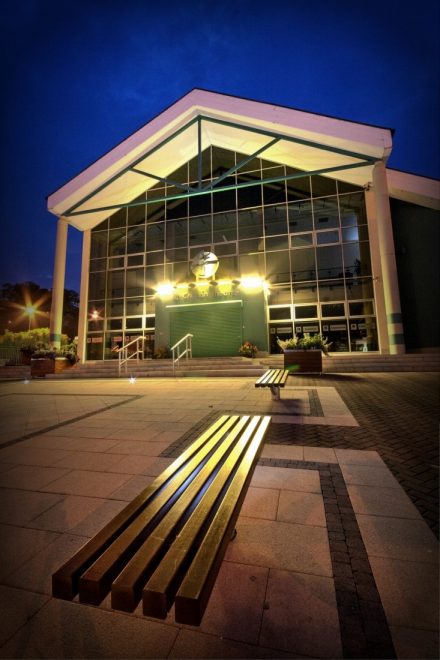 An Grianan Theatre in Letterkenny.

A SERIES of brightly coloured graphics will start popping up on the pavements of Letterkenny over the next two weeks.

The ‘breadcrumbs’ form the first step in an ambitious project which is looking to reconnect the three cultural institutions in the town, namely Donegal County Museum, An Grianán Theatre and the Regional Cultural Centre.

Banner installations will also be erected outside each of the three buildings as part of the ‘Letterkenny Cultural District’ project.

Rathmullan based architects Pasparakis Friel have been appointed by The Irish Architecture Foundation and Donegal County Council to lead the development. They will work with a graphic designer, horticulturist, social entrepreneur and historian in engaging with the local communities and the existing institutions in developing the concept.

Speaking to the Donegal News yesterday Ronan Friel of Pasparakis Friel said they were looking to hear from local residents about a proposed new cultural district for Letterkenny.

“We’re trying to raise awareness that there is a natural route between these three institutions. Over the next few week there’s an installation being erected outside each of them and we’re laying a series of breadcrumbs between them to make people aware that if they’re standing on the Port Road there’s only five minutes between the Donegal County Museum, An Grianán Theatre and the Regional Cultural Centre.

“We will lay down a series of brightly coloured graphics on the ground, designed to lead people along the route. Ultimately, we’re trying to create a sense of a cultural district and this is the first step along the way.

“Given the recent restrictions imposed by Covid we’re looking at bringing culture and art into the open outside these three buildings with more artwork on the gable of buildings as well as more art installations and sculptures along the way,” Mr Friel said.

“We would like to hear from locals as to how this project could be a catalyst for the growth of culture and arts in the region whilst also improving Letterkenny’s public realm. Engaging local communities with their shared spaces is a key priority for the Irish Architecture Foundation’s Reimagine…project, and we want to ensure local people are at the centre of our project,” he added.

The new cultural district is part of the Irish Architecture Foundation’s Reimagine… project to enhance the local built environment of six towns across Ireland.