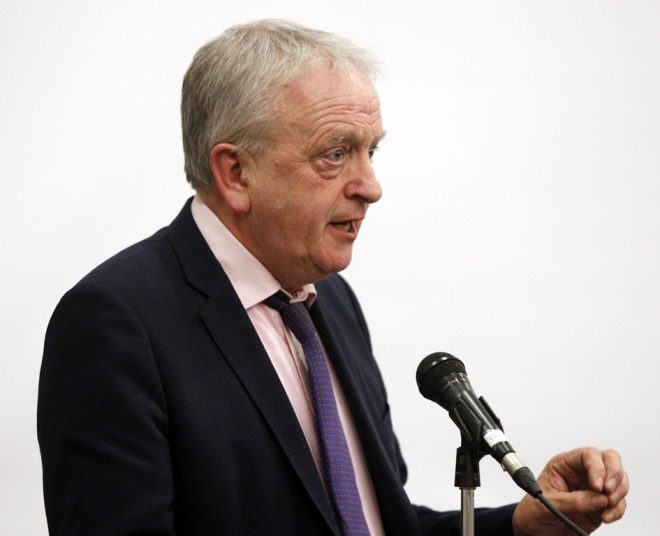 THE most senior employee of the Fine Gael party will turn the key in his office door for the last time this evening.

Tom Curran is retiring as the party’s General Secretary after twenty-one years in the post. It’s not too often in politics that somebody can exit on their own terms but having reached retirement age last year the party asked him to stay on to help oversee this year’s General Election campaign.

In an exclusive interview with the Donegal News, Mr Curran spoke about life, family, religion and politics. There have been many highs and lows over the past two decades but no regrets.

He’s confident that former Education Minister Joe McHugh will make a return to the Cabinet table and believes there’s good reason for Fine Gael to be optimistic in Donegal.

A native of Port Road, Letterkenny, Mr Curran plans to spend his retirement between his home in County Meath and his farm in Dunlewey. He’s doing a course in spirituality and intends to study scripture but has no plans to work as a political consultant.

The son of Moira and Con Curran, he has a brother Neil (Kirkstown) and four sisters Lilly (Manchester), Moira (Dublin), Fidelma (Dublin) and Margaret (Dundalk).

“It had been my intention to go to South America as a missionary. I was enthused by the whole notion of liberation theology and working with the poor,” he recalled.

His career path changed dramatically following a Christmas night out in the Golden Grill, Letterkenny.

“I was in sixth year and went to the Grill where I met a woman who, two years later, would become my wife,” he explained.

That woman was Noeleen Clarke, whose family were from Carrigans, and the couple have four grown up children Conall (Australia), Donal (Portlaoise), Maire (Blackrock, Dundalk) and Finnian (Dublin).

“If they had allowed clergy to marry I could have been an ordained priest now. Who knows,” he mused.

Instead, he worked for a year in Derry with the World Education Project before spending six years in Sligo as a Youth Worker with the scout movement. From there he became Director of the National Youth Council of Ireland before taking on the role as Chief Executive of Marca na Feirme.

In 1999, he was appointed General Secretary of Fine Gael by the then party leader, John Bruton.

“When leaving Dalgan Park I decided that, if possible, I would take jobs where I felt I could make a difference. Throughout my career I’ve been trying to influence things and make life better for people. I believe that, in politics, you can make a difference – I still do,” he said.

“Twenty one years on I’m still delighted to be doing this job and I’ve to pinch myself at times. My father, who originally came from Gortahork, often told me the story about him getting a scholarship to St Eunan’s College. He had no English when he arrived and was the first member of his family to go to secondary school. They’ve helped to make me what I’m become,” he said.

Looking back on his political career, Mr Curran noted that history is always written by the victorious – never the losers.

“One highlight for us would be bringing about full employment in 2016, ‘17 and ‘18 when we brought the country back from the cliff edge. We paid an electoral price in that we lost seats since then but it you want to do what you believe is right for the country then you have to be prepared to pay a price,” he said.

“The most significant changes that I’m proud to have been part of would be the marriage equality referendum and woman’s right to choose. You might feel that’s strange coming from someone who was studying for the priesthood but I do believe that it’s the most important changes we have made in Irish society.

“I’m still a person of faith. I’m a practising Catholic but, as I get older, I see that more and more things are grey. There’s very few defined truths. Life has fundamentally changed and we need to treat people are equals, whether they’re gay or male or female and I would have to say that the Church doesn’t do that,” he added.

Fine Gael’s policy failure around housing and homelessness are two areas of regret.

“Not being able to do enough when we could have. We could have done more,” he sighed.

On a more positive note, he feels that Europe is now ‘minding Ireland’s back’ when it comes to Brexit.

“We’re now equal to Britain as we’ve got Europe to support our stance and protect our interests when it comes to Brexit. We’re facing into some choppy waters. It’s a real challenge but one that we can overcome because we have all of Europe minding our backs and we can all see how politics in Britain is now so treacherous,” he said.

Closer to home, the lack of progress on the A5 Western Transport Corridor, linking counties Derry and Tyrone in recent years also hurts.

“The failure of Northern politicians to move on the A5 is a regret. Monies have been provided south of the border but work never commenced. Donegal suffers from its peripherality and it’s a real problem. Let’s hope that this work commences and soon,” he said.

Earlier this year, Fine Gael went into a coalition government with Fianna Fáil and the Green Party.

“Whoever would have thought that possible a few short years ago? Politics is the art of the possible and I think that this government will last to 2024,” he predicted.

“We’re just catching up with the rest of Europe where, often, there are multiple parties in government. In some ways it’s just us growing up as a democracy,” he said.

“That remains to be seen and depends largely on how the government does over the next number of years. There will be a ding dong of a contest in 2024 or ‘25 in which I will play a full part as a volunteer,” he said.

“Next year will be very difficult. We’re entering into a recession. It won’t be as bad as the last one but it will affect us all. We’re all going to have to learn to live with Covid-19 in what is an uncertain world,” he added.

The most recent local elections were a ‘disaster’ for Fine Gael in Donegal and the party didn’t gain the momentum that it managed in other constituencies around the country.

“We ran four very capable women in the local elections. None of them were elected but there will be another day as the role of woman and the environment remain among the bigger challenges in politics.

“The indications are that Fianna Fáil is in decline while Sinn Fein has really strengthened and it all makes for an interesting electoral contest over the next number of years. I think there are good reasons for Fine Gael to be optimistic in Donegal,” he said.

Joe McHugh became Minister for Education during Mr Curran’s time at the helm and he thinks that he will return to the Cabinet table in the future.

“It was disappointing that Joe didn’t get a senior ministry but his skill set is well recognised throughout the party and he’ll undoubtedly return to the Cabinet,” he said.

While Deputy McHugh’s star has shone brightly, the party’s failure to get a replacement for former Deputy Dinny McGinley is another source of frustration.

“Unfortunately Dinny didn’t groom a successor. That’s always been a source of tension between me and TDs as they saw me as someone who was always trying to bring through the next generation. The party needs to identify someone from the South West Donegal area as I would like to see the Gaeltacht community better represented in the Dáil,” he said.

“I would liked to have done more in my twenty-one years but, yes, Fine Gael has delivered. We were the only party committed to delivering on rural broadband. With Covid-19 and people working from home we all know the importance of that project and, thankfully, the new government is committed to ensuring that it happens as quickly as possible,” he added.

Tom Curran will remain a card carrying member of Fine Gael and will be active on the ground supporting the party but not as General Secretary as he bids farewell to his PA Catherine O’Donnell from Killybegs and colleagues.

“As General Secretary you have very little to do with success but all to do with failure. I’ve loved every minute of it and I’ve no regrets. I never got friendly with any of the leaders because I didn’t see it as my job. My job was to run the party in a professional way and keep my distance. Politics doesn’t define me as a person. There’s more to me than politics,” he said.

“The only way you can make a difference in politics is if you are in power and I would say that we are stronger as a result of being in power. Fine Gael has good committed leadership and will get stronger,” he said.