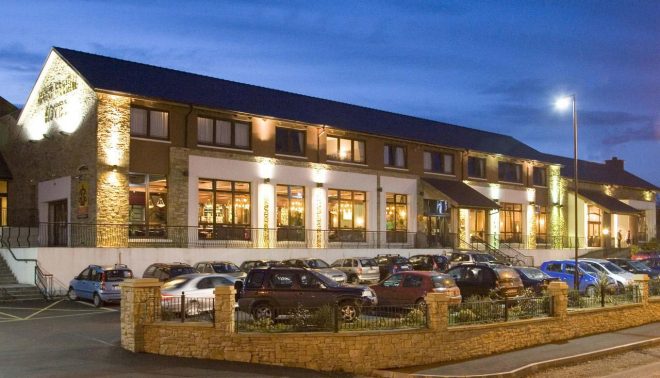 TERRY McEniff has been in the hotel business his entire life. After losing three and a half months of business to lockdown earlier this year, he thought he faced the worst the industry could experience.
But with Donegal moving to Level 3 from midnight on Friday, the hotel sector is facing further uncertainty.
Mr McEniff is managing director of the Mount Errigal Hotel in Letterkenny which with its 139 rooms is the biggest hotel in Donegal.
“We’ve had seventy rooms cancelled over the weekend already as people can’t come in now that the Government has seen fit once more to slash the hospitality industry while, at the same time, fifty-four kids will be able to get on a bus to go to school on Monday morning. It just doesn’t add up.
“To compound matters, they tell us that we’re allowed to serve fifteen people outside. It’s Donegal and it’s coming into winter and that’s an insult,” Mr McEniff said.
The Mount Errigal, like all other hotels across the country, was closed from March 16 to June 29.
“In fairness, we’ve had a bumper July and August. We lost weddings but people, North and South, did support the hospitality industry with staycations and now we’re back at square one.
“How am I meant to keep staff when I don’t know what’s happening from week to week? If the Government took the decision to close us all down for three months to give it a real go then fair enough but this A La Carte approach is all wrong.
“I’ve given a commitment to my staff that I’ll try and stay open for as long as I can but will the current restrictions be lifted after three weeks? I’m not so sure because I think they (Government) want to put every county into Level 3.
“Education is important and I understand that they’re determined to keep the schools open but it’s coming at a huge cost to our industry,” Mr McEniff said.
While the Mount Errigal is staying open, other hotels owned by the McEniff family including the Great Northern Hotel and Allingham Arms Hotel in Bundoran closed over the weekend.
“Bookings have been slashed. They’ve been decimated,” Mr McEniff said.
Nesbitt Arms
Another hotel which pulled down its shutters on Friday night was the Nesbitt Arms Boutique Hotel in Ardara.
Mr Liam McGill, manager, said it just didn’t make economic sense to remain open.
“We have a very good July and August while early September was very good too. This week would, traditionally, have been one of the busiest in the year. It’s the Glasgow weekend and we would normally have university students down from Coleraine but that’s all gone.
“We were meant to have eighty guests staying on Saturday night with as many more booked for meals.
“We’re due to reopen on October 16 but, realistically, we’ll have another look at it closer to the time.
“The likes of Halloween and the Match Making weekend together with dinner dances and parties would keep us going throughout quieter times in October and November but they’re all gone now too. Everything is up in the air at the moment,” Mr McGill said.
“We have to be optimistic. We all are, but it’s not looking very good at all,” he added.