A Letterkenny cat is hoping to score a purr-fect ten at this year’s Nose of Tralee.

Luther a three-year-old Turkish Angora cat, has navigated his way through the early stages of the quirky competition and has been chosen by the judges as the official Nose of Tralee Donegal representative for 2020.

Now though and to get over the feline finishing line in fur-st place, Luther, and by extension his owner Kirstie McShane, needs the help of the public.

Run by Pet Sitters Ireland, Nose of Tralee is an annual contest aimed at finding the most adorable pet in Ireland.

With a top prize of a €500 Tesco voucher, a €200 Pet Sitting voucher and a photo shoot with David MaCauley Photography, it is not to be sniffed at. And that is why Luther is putting his best paw forward as he bids for 32 county glory.

Outlining why she feels her pet should be top cat, Ard O’Donnell resident Kirstie said, “I’ve had him since he was five-weeks-old and he’s not like any cat I’ve ever met. He is a total softie, so docile and gentle and very in tune with human emotions and feelings. He picks me up when I’m sad and I just love him to bits.” 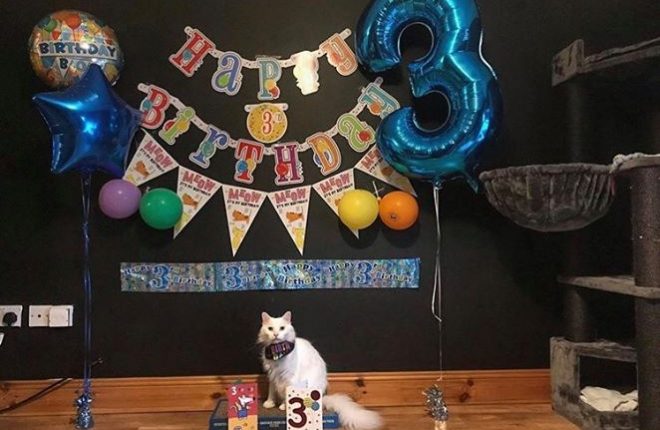 So close is the bond between the pair that Kirstie has gone as far as to have Luther elevated to nobility status.

“I’m from Scotland originally and last year I spotted that you can buy a lordship. So for his birthday I bought Luther one and he now owns a square foot of land in Glencoe. His official title is Lord Luther and if he was to win the Nose of Tralee, that would be another title to his name.”

In her submission to the judges, Kirstie described her furry friend as being “elegant, poised, adventurous, loves a good hat and most importantly, has a big loving heart”.

But with competition from cats, dogs and even Sligo pig George Cooney, will Luther’s adorability be enough to sway the judges?

“I would love him to win and at the end of the day it is all a bit of fun, something quirky in these depressing times,” Kirstie added.

Voting for the final stage of Nose of Tralee 2020 continues until August 25 when the overall winner will be announced.