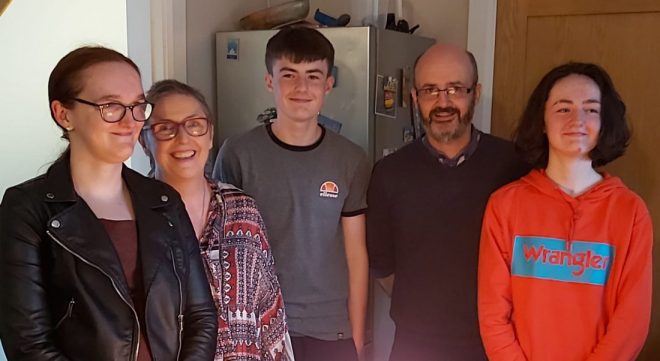 Tess McLoughlin, her husband Kieran and their three children Ellen, Danny and Lisa

A black and white shih tzu dog found roaming around the streets of Letterkenny last weekend has been reunited with his owner.

Twelve-year-old Jasper went missing from the Monaghan village of Smithborough ten days ago.

On Monday, the dog’s grateful owner Cormac Connolly made the 120 kilometre trip to Donegal with his daughter and three grand children to collect his beloved family pet.

“Maybe this will give some other people hope and solace that they too will find their missing pets,” Mr Connelly said.

“We’re delighted to get him back. We really thought that we would never see him again. I had resigned myself to never seeing him again. Only Tess is a dog lover herself and recognised that the dog was a stranger to the area this story could have had a different ending. We’re so grateful that Tess and her family took Jasper in and cared for him so well. We’ve no idea how the dog got to Letterkenny,” he added.

Speaking to the Donegal News on Tuesday, Ms Tess McLoughlin said that she was delighted to be able to reunite the dog with its loving owners.

“I was driving up Glencar Road on Sunday when I first saw this little dog at the side of the road. For some reason there are dogs up and down this road quite often but I knew this little fella was new.

“I went home but I wasn’t happy and returned a short time later to see that he was still walking up and down the road. I got out of the car and he came up to me and was rubbing off me – a friendly little fella – so I decided I wasn’t going to leave him there and I took him home,” she explained.

The dog was bleeding and looked like he had some bruising. He wasn’t in good shape.

“I took a photograph of him and called to the neighbours to see if anybody knew him but they didn’t and then we put the picture up on Facebook,” she said.

Tess’s husband, Kieran McLoughlin who works in Letterkenny University Hospital, went to work on Sunday night. He was contacted by a friend, who used to work in Donegal a few years ago, from Monaghan.

“She thought that it was her father’s dog which had gone missing the previous Monday night. He had been let out of the house to go to the toilet and never returned,” she said.

The family went to great lengths to find the dog in Monaghan, putting posts on all the lost dog sites as well as on Gumtree.

“Cormac rang me to say that he thought that the dog might be his and explained that his dog, Jasper, had a microchip inserted the back of his neck. He also sent me photos of Jasper and he asked me to send him a picture of the dog’s teeth as Jasper was missing a few teeth,” she laughed.

When Kieran finished work on Monday morning the couple drove into Derry to have the dog checked for a microchip.

“Within minutes of being in with the vet it was confirmed that it was Jasper. I burst into tears. I couldn’t have been happier if I won the lotto,” she said.

“Later that day Cormac drove up from Monaghan. He had his daughter and three grandchildren with him. He said that Jasper has been with the family since he was a pup. They couldn’t have been happier,” she added.

“I’ve no idea how the poor little fella got to Letterkenny all I do know is that he didn’t walk. Maybe someone stole him and was using him for breeding. I rang the Gardai on Monday to tell them,” she said.