Advertisement
HomeHeadlinesRising from the ashes
Advertisement
ALMOST a month after Waston Hire was destroyed in a major fire in Letterkenny, owner John Watson is in negotiations with a landlord for a new premises which is expected to be finalised in the next two weeks. It marks an important milestone for the well known businessman as he embarks on a daunting challenge of rebuilding from  scratch, a business that was 15 years in the making. An upbeat and optimistic Mr Watson sat down with the Donegal News this week to look back at the events of June 15 and to look ahead to the future.
“For a couple of days after it was very overwhelming. There was a lot of different emotions going on there. There was a lot of support from the public. We are proud of that too, that we are held with that high regard in the community. People are waiting for us to get stuff in, they are giving us a chance. They want to give us the business and we do appreciate that.” 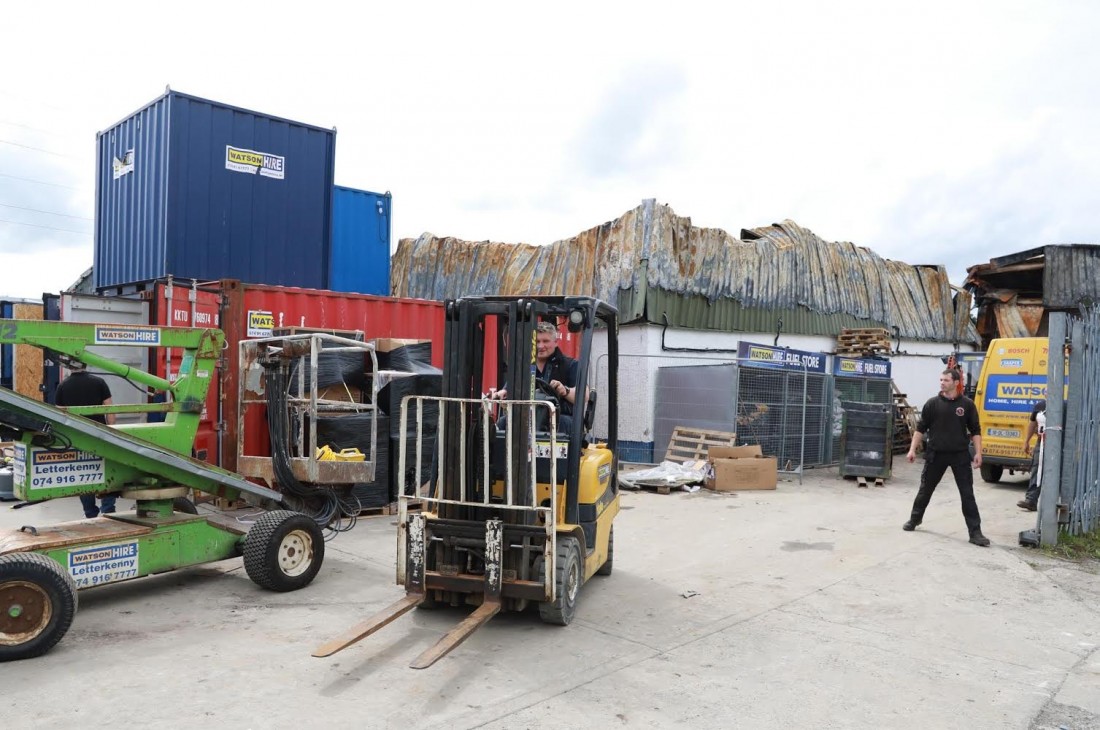 Working out of six freight containers at the Kiltoy site they are now back to having 95 per cent of their hire capacity.
“It’s all new stock so that is a positive for the customers too and that is all down to suppliers supporting us. We’re negotiating with a landlord for a new premises which is probably about two weeks away. It is local. It will not be very far from here. At the moment we are actually employing a new storeman for the new premises so even in the face of adversity we are going to start employing people again. We are doing what we can to keep the customers satisfied at the minute until we have the new place open.”
The location of the new premises is being kept underwraps until the negotiations are finalised. It will be of a similar size but will provide more parking for customers which had been an issue in the past and Mr Watson also has plans to expand their services. He is keen to get the message out that they are open for business again and is eager to start rebuilding with a blank canvass.
“It’s building back from the ashes more or less. Now we have an opportunity to do things different. We had 15 years learning about what the public want so now it is about putting that learning into practice,” he said.
July 4, Independence Day in the US, was meant to be a big day for the company as they  were due to celebrate 15 years in business.
Explaining why he opened on that date in 2005 Mr Watson said: “I used to work for a national company and I picked fourth of July because we were going to be independent. The fourth of July should have been a big day for us.”
But their barbecue celebrations were not meant to be. The cause of the fire, which also caused significant damage to a HSE storage unit, is still unknown as investigations continue.
“Nothing has been established yet. There has been three investigators here so they have all taken bits away to investigate it. It will be good to know the cause.”
Mr Watson thanked the public for their tremendous support in recent weeks and said this support is what drives him and his staff to continue.
“Even during the worst days during the recession we always kept a positive outlook on things, there is always an opportunity but the first two weeks after the fire it was hard to see the positive in it,” he added.
“It was overwhelming, the public support. Letterkenny might be a big town but it is has a small community feeling, everyone knows you and everyone wants to help out.”