A Donegal man who ‘clamped’ a GoSafe van says he did it to give people a laugh during lockdown.

The clip, which has been viewed thousands of times since being uploaded to social media, shows Mark McGrath approach the speed monitoring vehicle and place what looks like a clamping device on its front driver side wheel.

Dressed in a high-vis jacket and camouflage trousers, the Lifford man then tells the camera that he is turning the tables on the GoSafe operators who he claims are parked on private ground outside Murlog church in the border town.

“I’ve put a wee clamp on her there. They are taking money off boys while they are parked on private property. Well I’m going to take money off him because he owes me €50 to get this clamp off.”

Mark has since revealed that rather than an actual steel clamp, the instrument was a piece of wood painted yellow. And rather than get himself arrested for interfering with police property, he only placed it close to the van but not actually touching it.

“Murlog is one of the new spots for the speed vans and a lot of people have been rearing up about it. So I thought I would do it for the laugh. They never got out and I made sure that I didn’t actually touch the van but I left it about a foot away from it. There are cameras all around so I had to be a bit careful.”

The fact that it was only a joke has not stemmed the applause from social media though. Since being shared on Facebook the video has been beamed around the world and viewed thousands of times.
“Job well done there,” wrote one contributor while another added, “Best laugh I’ve had in ages, well done”. 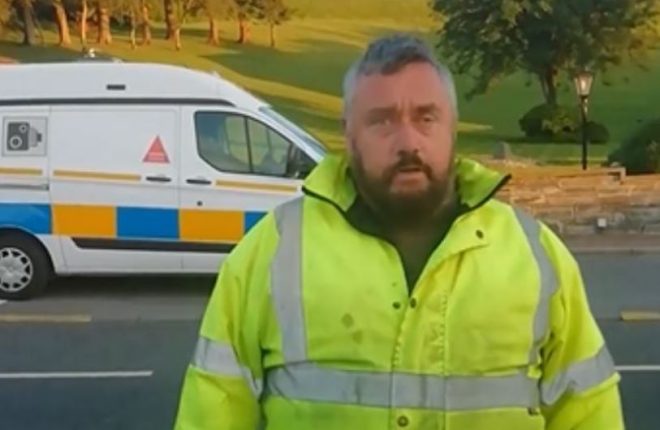 Mr McGrath telling the camera that rather than the speed operators fining motorists, he is charging them €50 to remove the clamp. The clamping prank is the latest in a string of light-hearted videos by the Lifford man.

For its part, An Garda Síochána said it has received no reports of the incident.

“An Garda Síochána does comment on material published online by third parties. In terms of incidents reported in the Lifford area, there is nothing matching the details provided currently recorded on our system.”

The prank was, Mr McGrath said, all about giving people a giggle.

“People need a bit of a laugh, especially with the times that are in it. If you didn’t laugh you’d cry and that’s what it is all about, having a laugh.”