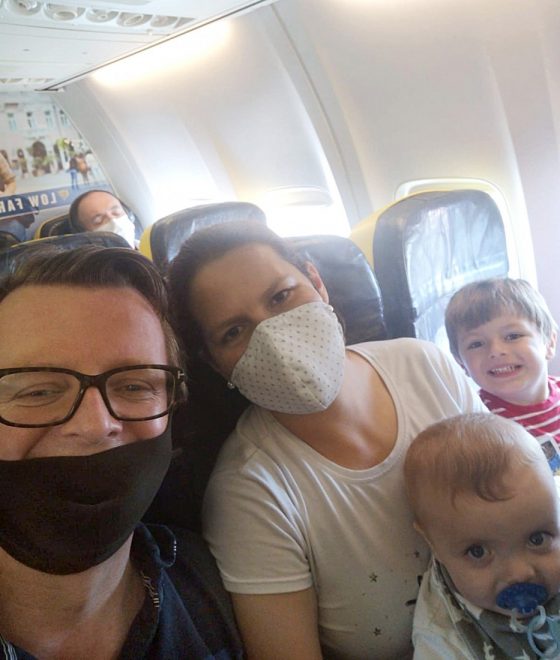 A DONEGAL businessman has been reunited with his wife and two young sons after spending ninety days apart due to the Covid-19 pandemic.
Ian Harkin, who is managing director of Lottie Dolls, had a tearful reunion with his wife Sofia and sons Henri, three, and Liam, one, in Schiphol airport in Amsterdam on Friday last.
Separated from his two young boys for weeks on end, the Ballybofey man couldn’t wait to be reunited with them.a
Over the past three months, Henri has learned to speak Spanish while Liam took his first steps.
“Henri burst out of the queue and past customs and ran over to me. It was a lovely moment. I don’t think we’ll be travelling apart again any time soon,” Ian said.
The family had travelled to the New York Toy Fair back in February before flying on to Mexico where the boys met their aunts, granny and great granny.
Unfortunately, Ian had to take an unscheduled trip to Australia to attend the Melbourne Toy Show. While there, the global pandemic started to take effect with countries quickly closing borders and cancelling flights. Ian takes up the story.
“The trip to Mexico had been planned for over a year. Sofia’s mum and granny flew in from Columbia (Sofia’s home country) and they all met up in Mexico with her sisters.
“At the last minute I had to fly out to Australia and we had just changed distributors (Lottie Dolls) to attend the Melbourne Toy Show. I had planned to rejoin them when everything starting shutting down.
“We then decided to meet back in Ireland and while I managed to get one of the last flights out of Australia Sofia and the boys weren’t so lucky in Mexico. We then got incorrect information about flights. We had been told that the next available flight out of Mexico, going to London, would be at the beginning of June but that got cancelled. We then found out there was a flight, once a week, to Amsterdam,” he explained.
With Sofia and the boys safely on a flight out of Mexico last Friday morning, Ian boarded a flight in Dublin bound for Amsterdam.
“I was taking a bit of a risk leaving Ireland but it would have been unfair to have asked Sofia to carry two young boys, three big suitcases and a buggy. We were only in the airport for a short while before we were able to get on the connecting Ryanair flight back home,” he said.
“We had been apart for ninety days and while we spoke on WhatsApp every day it was tough. Sofia’s mum and granny don’t have a word of English so Henri has come home fluent in Spanish – it’s weird – while Liam took his first steps in Mexico,” he added.
“I like to look at the positives though and the extended break also gave Sofia some quality time with her own granny, who is in her nineties, and her mum and sisters while it allowed me time to spend on the business.
“It’s great to have them home and there’s nothing better than seeing the two lads running mad around the house. I won’t let me out of my sight for a while,” he laughed.