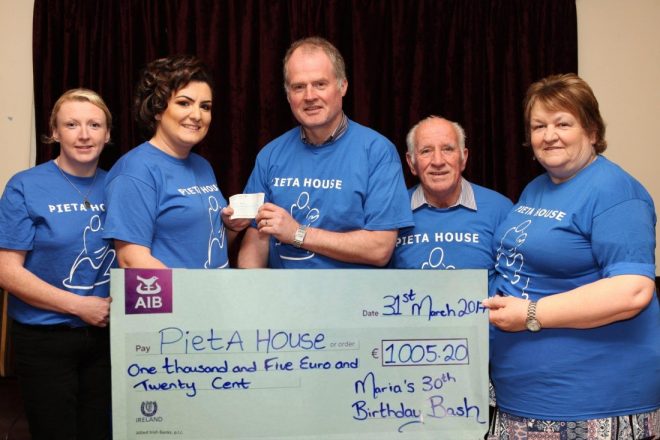 Maria Murray, Carrownasaul, Kilmacrennan, handing over the proceeds of her birthday bash in aid of Pieta House to Danny Devlin, Pieta fundraising coordinator for the Northwest. Included are Maria’s parents, John and Mary Murray and friend Dolores Duffy.

A Donegal Councillor has called on Pieta House to clarify its position about plans to significantly scale back the level of service in Letterkenny.
Cllr Ciaran Brogan says aalmost all staff at Pieta House North West have been put on notice in recent weeks as part of Pieta House’s plan to restructure its operations.
The centre, which opened three ago this month, is staffed by a centre manager, clinical support staff, a team of sessional therapists and a suicide bereavement liaison officer.
Based in the Grand Central Building on Canal Road in Letterkenny it offers free-of-charge and freely-accessible therapy to those experiencing suicidal ideation, those who have been bereaved by suicide, and people who are engaging in self-harm.
“There are six therapists employed at Pieta House in Letterkenny on a sessional contract basis. The plan is for this to be reduced to just one full-time therapist. The Letterkenny manager has been put on notice, two part-time administration staff were let go in January with two more due to be laid off in June. The therapists have also been told not to schedule any more appointments after June. It’s my understanding that similar reductions in staff numbers at other Pieta House centres throughout Ireland are also planned for June,” Cllr Brogan said.
“I have made a number of attempts to contact Pieta House at national level this week. Unfortunately I have yet to be contacted by them in response to my queries and concerns,” he added.
“I think it is quite disingenuous of Pieta House nationally to run an ad campaign appealing for people to donate to help maintain the services it provides, yet it isn’t being up front with the public about what is happening to these services. The latest restructuring plan is going to have the biggest impact on the service and the clients are going to be the biggest losers.
“I am aware that changes have already taken place in the organisation since the appointment of the new CEO. But I think Pieta House should be working closer with government and the HSE. Ultimately, it’s all about meeting the needs. If the need is there, then we need to get the supports in place for those who need the service,” Cllr Brogan said.
“I know the staff in Letterkenny were well on top of their work, are busy and were expecting to be even busier. The Darkness Into Light Walks, which were due to take place this weekend but have been cancelled due to the Covid-19 restrictions, were adopted and rolled out into so many different areas locally. Pieta House are still asking people for donations through a number of fundraising campaigns, and I am asking Pieta House to give the public some truth about its intentions regarding the services,” Cllr Brogan said.
Mr Danny Devlin spearheaded the drive to get Pieta House into the North West. He said he was ‘gutted’ by the news.
“Pieta House Northwest are not taking on new clients who are in suicidal distress. It would appear to me that the service is being withdrawn from Letterkenny as part of restructuring within Pieta House.
“I feel gutted with the current developments as it appears that there will be no one to one service provided to those in need in the Northwest, unless travelling to the nearest Pieta House in either Galway or Dublin. I feel for all those people who reached out and supported us in the fundraising efforts to bring the centre to the Northwest and to the dedicated staff at the Letterkenny centre who now have uncertain futures.
“I would have liked to see the centre continue its services in Letterkenny as it had been up to now, even at a reduced capacity, with a view to increasing capacity at a later date but unfortunately everyone is being kept in the dark on this issue,” Mr Devlin said.
Pieta House North West works with clients from Donegal, Tyrone, Derry, Fermanagh, Leitrim, Cavan and Monaghan.
Pieta House has said that due to the impact of the global Covid-19 pandemic, it has a budget shortfall of around €6.5 million this year. The vast majority of the charity’s income is received through fundraisers and donations.
Speaking in recent days, Pieta CEO, Elaine Austin, said: “We understand this is a very difficult time for our dedicated staff and we deeply regret having to take this step.
“With the loss of our flagship annual fundraising event, Darkness into Light, we have been left with a very significant funding gap and in order to keep our doors open to clients, we must make these very difficult decisions.”