IT seems like an age ago now as we acclimatise to life without live sport, but the Donegal hurlers had cause for celebration in March.

Mickey McCann’s team defeated Armagh by 1-18 to 0-19 in Carrickmore to secure the Division 3A title and promotion to a higher tier in the Allianz National Hurling League.

Not for the first time, Declan Coutler was the star man after posting ten points, and it was this excellent performance that saw him collect the Donegal News Sports Personality of the month award for March, in conjunction with Brian McCormick Sports & Leisure.

League success was Donegal’s target at the beginning of the season, but it didn’t look promising after a heavy defeat to Armagh on the opening day.

Coulter said: “We were well beaten by Armagh in the first game. We worked hard in pre-season with Ryan McLaughlin coming in as coach but we probably didn’t play as many games as we would have liked.

“We were level with them that first day with about 15 minutes to go and I missed a goal chance, and they scored one then straight after.

“They had subs coming on who made a big difference and that extra bit of game practise stood to them.

“Our backs were to the wall at that stage, and we had to win all our games to get into the league final.

“We took out our frustration against Tyrone and then Danny (Cullen) dragged us over the line in Darver (against Louth).

“We played in fits and starts against Monaghan and then beat Longford and that got us through to the final.”

The league decider in Carrickmore proved to be a real ding-dong affair, with Armagh coming back strongly in the second half.

However, Donegal managed to keep their noses in front and claimed the silverware on offer.

“Both teams were a bit nervy at the start.

“I actually started the game at midfield and Danny was out of position and it was just a case of getting through the first ten minutes and playing our way into it.

“Gerry (Gilmore) got a goal and we were six points up at half-time.

“They were always going to get a purple patch and we were lucky enough in the second half.

“I missed a few chances, but Jack O’Loughlin and Danny got great scores, and boys were able to win frees. Our game management was excellent and that saw us win the match and promotion.” 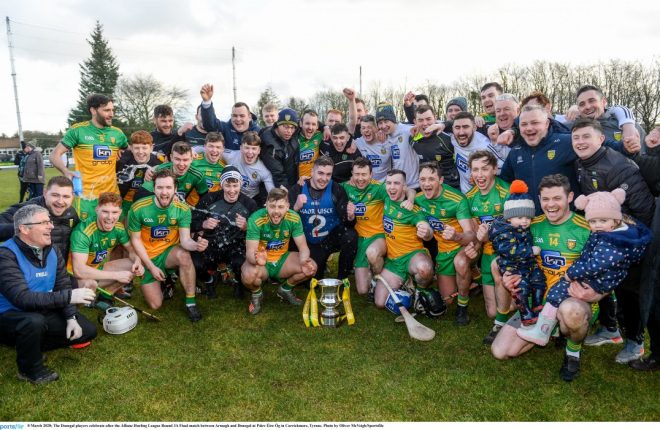 Teams from various sports have been left frustrated by the Covid-19 pandemic and have seen their seasons come to an abrupt halt, with no certainty over when they might start up again.

The Donegal hurlers are waiting to play in the championship, but at least they have clarity on the Allianz NHL front.

“The boys were joking that we are the most successful hurling team in the country in 2020.

“It’s nice that the competition was finished and that it’s not hanging over us.”

Setanta clubman Coulter originally hails from Armagh but moved to Donegal after marrying Ciara Cullen, sister of his teammate Danny.

He eventually switched allegiances in 2017 and helped Donegal to Nicky Rackard glory the following season.

The novelty factor of playing against Armagh, who he had a decorated career with, has worn off now, as he has played against them in competitive games in three of the last four seasons.

“It’s a bit strange for me but Donegal are my team now.

“I’ve played against Armagh a good few times now and to be fair I wouldn’t really see it as much of a difference from playing against those boys at club level.

“Other people make more of a deal of it than I do. I just go and shake my marker’s hand and luckily I’ve never had any mouthing or sledging. There’s respect between the two teams.”

Coulter was in good form in the early stages of the year and was pleased to get a sustained run after an injury-ravaged 2019.

However the Dromore NS teacher did receive a boost late last year when he was selected to go on the All Star trip to Abu Dhabi.

“It was a brilliant experience.

“You had boys like TJ Reid and Colin Fennelly that couldn’t go because of their club commitments, and for the first time, they asked players from weaker counties to go which was great.

“I was selected because I was Nicky Rackard Player of the Year in 2018.

“Thankfully myself and my wife Ciara were able to arrange it with school and baby-sitters and so on, and we had a great week. 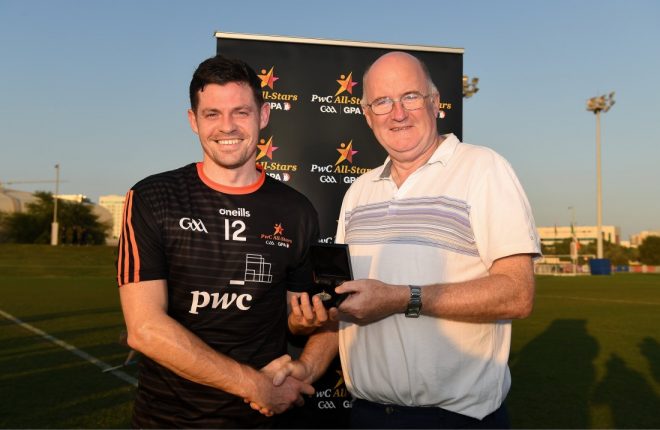 Declan Coulter receiving the man of the match award on the All Star trip from John Horan.

“I ended up getting man of the match which was brilliant. It was 13-a-side and it wasn’t championship pace, but you still had boys playing from Limerick, Cork, Wexford, Tipp and so on,

“I was shadowing Patrick Horgan from Cork at one stage, and just to see his movement and skill up close was class.

“Cian Lynch (Limerick) was so composed on the ball but then he’s like that when he’s playing in big games in Croke Park.

After missing a large chunk of last year, Coulter once again finds games and training off limits due to the Covid-19 pandemic.

“You can keep yourself ticking over but you miss the matchday. The wee routines you have before a game, like where you sit on the bus and how you get warmed up.

“You miss the craic with the boys as well, but look, hurling just has to take a back seat at the minute.”

Donegal’s Nicky Rackard Cup campaign was due to start this weekend, but that has been postponed for the foreseeable future.

Coulter is enjoying time with his children Lara (3) and Thomas (1) and is staying fit but admits he doesn’t know if there will be a championship in 2020.

“We were due to play Armagh again this weekend, so we would have known them very well by then.

“We don’t know how things will play out with sport. We just have to play it by ear and see how we go through the phases that the government have put out.

“My own opinion is that we probably won’t have a county season but we maybe will get a short club season.

“You just have to keep ticking over. In fairness to all the county boys, they are still doing the work and sending in the GPS results.

“As for striking the ball and touch and so on, luckily all you need is a wall to work on that.” 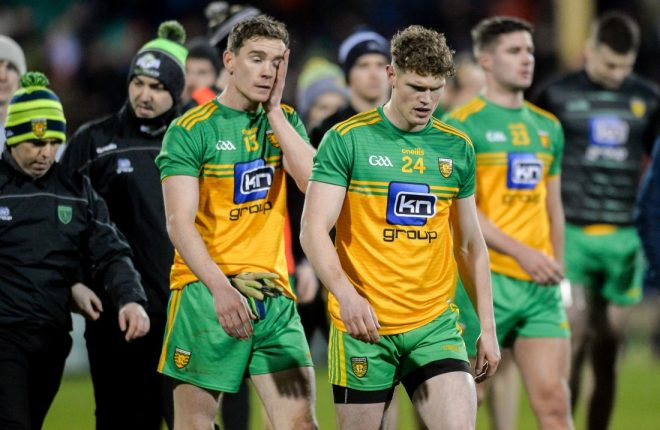 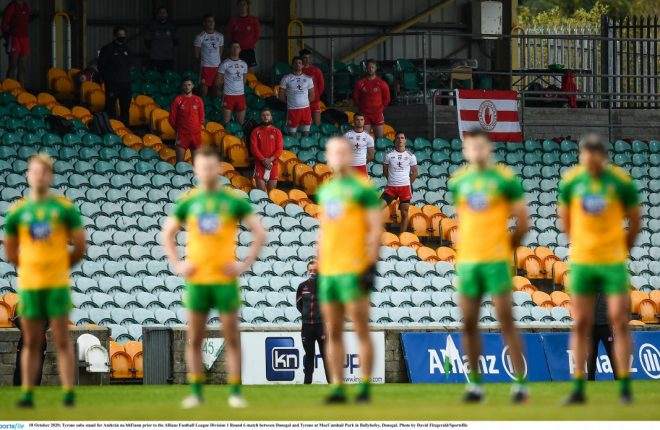 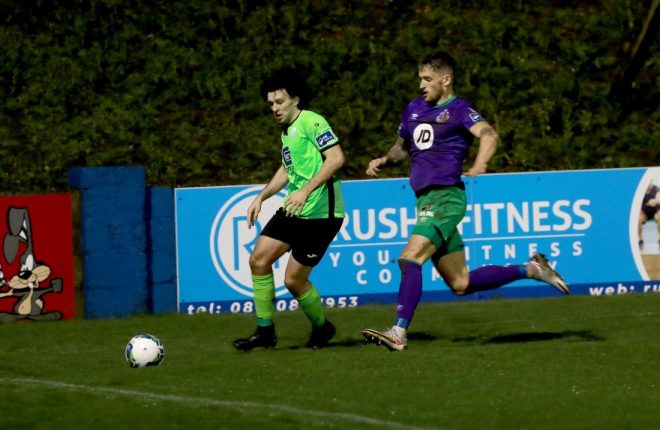 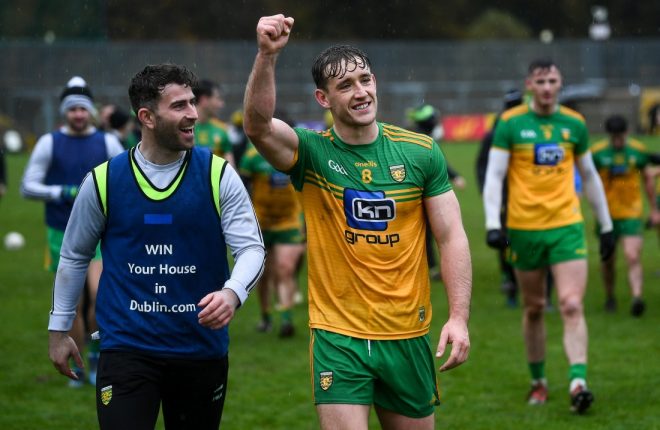