“Most races that I won, I would have been in the lead from the first mile.

“Nobody advised me to do that or anything. My mantra was just to get stuck into it and go out hard.

“For me it was a case of the man that went the hardest for the longest would win.

“And I didn’t mind if some boy beat me, but I would make sure to make him work for it.”

Philip Connolly’s dedication and willingness to push his body to the limit were key to his athletics success in the late seventies and eighties when he was one of the best runners in Donegal and Ulster.

Athletics in the county was moving on to another level when the Manorcunningham native was making his name, and he was consistent and successful despite a huge amount of competition.

Connolly’s memory is excellent and he was able to recall many races and incidents from his career when contacted by the Donegal News over the weekend.

While many young athletes are sent on a pathway to success from very early on in their lives these days, that wasn’t the case for Connolly, who went through his school days unaware of the talents he boasted.

“I started off fairly late. I was 17 and I didn’t really play any sport before that.

“Neilly McDaid was going out with my cousin Beth and he kind of roped me into it.

“I got really into it and running was number one and everything else came second after that.”

Once Connolly was introduced to running, he was hooked and his talent was evident from his early races.

“I first competed about six months after I started running.

“It was an Under 17 Cross Country race over in Glenties and I came third.

“I did a few other Cross Country races around that time and could see that I was starting to make a bit of progress.

“I just got stuck into the running really. I didn’t think too much about it.

“I was training on the roads around Manor and then I went down to Cranford.”

The Cranford Athletic Club were revered throughout the province and further afield in the seventies, and Connolly was happy to rub shoulders with some of the best athletes Donegal had to offer.

“Cranford would have been the only club in the county at the time, and you’d have men coming from all over to race for them.

“You would have had the McDaid brothers – Danny, Neilly, and Frankie, and Joe Boyce would have been down there.

“You had the likes of Jim Hynes, Sean McBride, and Seamus Judge as well. Some brilliant runners.

“Eamon Giles was the main man down with Cranford and he was always very enthusiastic and helpful, and would have encouraged you on.

“That was around the time the troubles was really kicking off, and we would have been travelling all over Ulster, but we never had any bother.

“All you were looking to do was to get to your race and back, and you weren’t worried about anything else.”

Connolly had to bide his time for success, and make his body strong and durable so he could compete with the best, and beat them.

He was committed to the cause and in his mid-twenties started to see the fruits of his labour.

“Ah it took six or seven years before I started having any real success.

“As the old saying goes, it takes ten years to be an overnight success.

“It’s the same with all sports, it just takes time to build up to a level.

“1977 was my big breakthrough year really. I won the Ballyshannon ten mile, the Strabane ten mile, and the Killybegs ten mile.

“I also won the Ulster 15 Mile Championships in Armagh, and then went on to win the Ulster Marathon as well that year.

“It was a different time and in my opinion, it was better than it is now with all these fancy runners and equipment and heart monitors.

“When I won the Ulster Marathon, there wasn’t even water stations around the course.

“I remember seeing a man around the twenty mile mark and he had a big bottle of water and I asked him for a drink.

“He said it was for his son, who was also running, but he didn’t mind if I took a sip.”

During that same year, Connolly switched allegiances and joined up with Letterkenny AC.

“Cranford and Eamon in particular were very good to us but it was just handier.

“When I went to Letterkenny then you would have had the two McCarron brothers – Noel and Eddie – and John Doherty and Michael Crampsie. Danny (McDaid) was still going very strong.

“We all got on great and we would have pushed each other on. It was healthy competition.

“Some of the times from the fast training runs done around New Mills back then would win races these days.”

Connolly was happy to test himself in all races, and while he came second in the Ulster Cross Country Championships in the late seventies, he admits that he was more comfortable on the road.

“There were boys that could beat me in Cross Country that wouldn’t beat me on the road.

“That was just my make up really. I was very light.

“I competed in the very first Dublin Marathon in 1980 and I weighed eight-and-a-half stone. 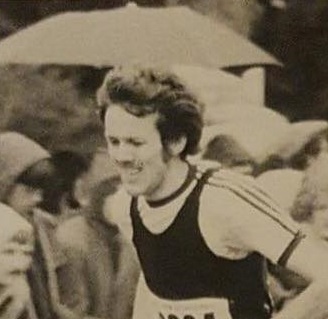 “I was never worried about the weight. I was eating like a horse at the time.

“I’m still only over ten stone now so it was just my make-up.”

Connolly was enjoying life as a mechanic in Hegarty’s Garage and training in his spare time.

He was regularly running between 75 and 85 miles each week, and there were plenty of races to whet his appetite.

Connolly is thankful that he had very little issues with injuries over the years but he did encounter one when he was 31.

“In 1983, I got myself in excellent shape. There was a local ten mile race and I did it in 49.54 and I was very happy with how things were going.

“The National Marathon was being held in Letterkenny that year and I was putting in a big push for that.

“Unfortunately I twisted my knee at work and I tore my cartilage and that put pay to that.

“I came second in the Donegal Cross Country late in the year, but the problem would come back again and flare up so I needed to get it sorted.

With his knee back in rude health, Connolly was striving for more again, and he ran his best ever marathon time shortly after that.

“I went over to Glasgow and ran the marathon in two hours 26 minutes. It put me 35th overall.

“There was great satisfaction with that. It was a great time.

“To be honest, I think I could have went even quicker had I not injured my knee that time.

“I ran the London marathon in 1986 as well and did that in 2 hr 33 which was good going. I also did the Dublin Marathon five times I think in the eighties.

Connolly was still going strong in the late eighties and early nineties, but eventually the times started to slow down a bit.

For someone who had been so competitive over the previous 15 years, it could have been difficult to watch his times deteriorate but Connolly knew he couldn’t go on forever.

“It all went downhill in my forties,” he laughed.

“I just took it as mother nature coming for me. You can’t expect miracles to happen. You need some youth in the legs. I competed on during the early and mid-nineties.

“I actually organised an International 10k road race in Raphoe in 1996 in which the World 10k champion Liz McCoogan came over and participated in.

“There were two other Olympians as well, namely her husband Peter and Danny McDaid. We had a good turnout for that.

“But gradually over time I drifted away from it. I still would have ran around home to stay fit, but I got more involved with football coaching then.”

Connolly started to help out with his local club Lagan Harps and he also took on the league representative team, which included a host of talented players.

“I worked with the Letterkenny and District team from Under 10s up to Under 16s.

“Five of those boys went on to play in the League of Ireland. Barry McNamee was in that team, and his brother Tony, and you had Micheal Doherty, ‘Handy’ (Paul McVeigh) and Gary Merritt too.

“Caolan Ward and Conor Gibbons went on to play gaelic for the county, and Marty McGinty was a very good goalkeeper who went to Hibs.

“I didn’t have any great coaching pedigree but I got good help from Liam McLaughlin, Danny McConnell, and a fella from Ghana called Birch Adan.

“Birch sadly passed away a couple of years ago, but he was a very good coach.

“He had us playing a 4-1-4-1 with (Christopher) ‘Chippie’ Barrett holding in midfield, and Birch used to say ‘we’re going to play like the Italians’.

“We had some good days and those lads were all very easy to work with.”

In recent years, Connolly was coaxed back into running and re-developed his love for racing and enjoyment for the sport.

“I started back running again properly when the Park Run kicked off a few years ago and that was and is a fantastic idea.

“There’s no pressure with it. People are just running for the fun of it.

“I was doing that every week and it got me back into it again.”

Connolly was delighted to hit the roads again and enter local races, but a prompt response to a health scare proved to be crucial.

“I went over to Lanzarote at the end of 2018 to do a 10k and I found a slight pain in my chest the day before.

“Now it was grand the day of the race and I ran it as normal, but the pain came back again a few days later.

“I knew something wasn’t right so I got it looked at as soon as possible.

“I didn’t think why me, because why not me? I needed to get it checked out so I did.

“I needed to get three stents in my heart and thankfully everything worked out and it has given me a new lease of life.

“It was an excellent job, and I’ve been out running a couple of times a week, sometimes every other day if I feel up to it.

“I would still keep an eye on athletics and I would be in contact with some of the Letterkenny AC lads like Ciaran O’Donnell and Barry Mackey, who I would help out.

“I can’t see any sport for a while yet, but hopefully it will come back again soon.”

Connolly says the lockdown hasn’t knocked him too much out of his usual way of life, although he hasn’t been able to see his two sons who are based away from home.

“I actually retired thirty years ago to help raise our two boys Darren (30) and Ronan (28) so there’s not too much of a change for me.

“They are in Dublin so we can’t see them at the minute but hopefully we will soon.

“My wife Florence and myself enjoy a bit of golf, so hopefully we’ll be back at that in the next few weeks.

“Other than that, I’m doing ok. I have a three mile lap, a six mile lap and a nine mile lap out around home, so there’s plenty to keep me going.”