THERE aren’t many 17-year-olds playing senior football on this island, so Oran Brogan’s sudden rise to prominence with Irish League club Institute has been remarkable.

It hasn’t been the campaign that Institute envisaged and they were in serious relegation trouble before the Coronavirus pandemic struck.

However, for Letterkenny teenager Oran Brogan it has been a whirlwind start to the year.

He has gone from establishing himself with the academy side to playing regularly for the first team.

Brogan has embraced the journey so far, and when doors opened for him, he was ready to take the required steps forward.

The affable St Eunan’s College student enjoyed football in his early days, and started to make real progress when he joined Swilly Rovers at Under 14 level.

“I was at Swilly before moving to Derry for the debut year of the Under 15 League of Ireland.

“We won the league with Swilly, different cups and two Ulster titles. We also reached the last eight in Ireland on two occasions.

“Finnian O’Donnell, Eoin Logue, Ronan Boyce, Kyle McMullan and Frankie Campbell were all on that team.

“Gerry Crossan was manager. I enjoyed playing with them. We played good football and it was great to be a part of that team.”

With the League of Ireland underage leagues coming into vogue around that time, many of the Swilly players were in high demand with Finn Harps and Derry City trying to secure the best players.

Brogan impressed the Derry coaches and that secured a move across the border to play for the Candystripes.

“In 2017 I got asked to come in and train with Derry Under 15s for the new season coming up and obviously I was lucky enough to get signed.

“It was just a short season and at the end of the year we all had the opportunity to go up and train with the Under 17s.

“At that time I didn’t know whether I was going to stay on or not, but Russell (Porter) give me a call and asked me if I wanted to come to Kildrum Tigers.

“For me I felt it was the right time to leave Derry and improve technically and physically because I would have been a year out of age for that upcoming Under 17 season.

“We played in the D & D and the Coleraine and District league with Kildrum and we managed to win them and a few up competitions.

“We also took part in two international tournaments. In 2018 we went to Barcelona, and in 2019 we went to Poland.

“After winning the Foyle Cup, our managers Russell, Shane, and Chris Porter took over at Institute Under 18s and they gave me the opportunity to sign with the Irish league club to play in the academy league.”

Brogan felt that he was performing well under the Porters at Station Road.

So he had no hesitation in following them to Institute and testing himself at a higher level.

“I enjoyed working under the three of them and for me in that first year I was working with them, I felt it was the most I enjoyed my underage football and I thought it was the most consistent season of performances to go with it.

“So when I found out they were taking over Institute Under 18s, I jumped at the chance to go and play under them especially in the academy league.

“I joined in the summer of 2019 and they have a good set up in the underage right from Under 8s up to Under 16s, with the Under 18s playing in the academy league.”

Brogan admitted that he didn’t have any great senior aspirations when he first moved to the ‘Stute.

He was happy to play for the academy team and continue to develop his game.

There was plenty of optimism around the club at that time as renowned coach John Quigg took over as manager after leaving his role as a Derry City underage manager.

Quigg was keen to put his own stamp on the team over the summer, and fellow Donegal men Conor Tourish, Aidan McCauley, Brendan ‘Fildara’ McLaughlin, and Raymond Foy all signed on for the year ahead.

However, Quigg suddenly resigned just a week before the season had even started.

Sean Connor, who previously managed Sligo Rovers, Bohemians, Dundalk and Galway United, as well as spells in charge of CAPS United in Zimbabwe and Black Leopards in South Africa, took on the reins of the Irish League Premier Division club.

Connor, who lives in Killybegs, was open to giving youth a chance and that saw Brogan quickly move up the ladder towards the first team.

“When Sean Connor was appointed first team manager, he came to one of our Under 18 trainings around October and I impressed him and he asked me to train with the first team the following night, and after that session he asked me to continue training with them.

“The only problem was there is a FIFA rule that no player from the Republic of Ireland born in 2002 would be eligible to play for the reserves or first team until January 2020 and that stopped me being available for games until January.”

Everything was happening very quickly for Brogan, but he wasn’t daunted by the opportunity.

“I was surprised by it all because Sean was only manager for a short period of time.

“Although the end goal is to play in the first team, I was at Institute for two months and was only 17 so I wasn’t expecting it so early on in my time there but it was great that he gave me the opportunity and I’m grateful for that.”

Brogan didn’t have to wait too long for his chance when he was eligible to play.

He made his debut on January 1 this year when he started at right-back against Linfield at Windsor Park.

That was always going to be a tough task against one of the best teams in the league and there was no shame in a 3-0 defeat.

It was a case of being thrown in at the deep end, but the teenager enjoyed the experience.

“It was surreal from the moment we got off the bus at Windsor. Walking out to the pitch before the game warming up and playing against the best team in the country, and in the national stadium in front of a good crowd was amazing.

“You couldn’t have picked a better place or team to make your senior debut, it’ll definitely stay with me throughout my football career.”

Not everything went to plan for Brogan in that game and he and his teammates were under a lot of pressure.

However, he was proud of how he handled the match after a nervy opening.

“I started the game at right back and was nervous for the first 10-15 minutes. as you’d expect in such a big occasion.

“But after that I gradually got into the game and I feel I had a solid performance marking the best player I’ve played against, and one of the best if not the best player in the league in Joel Cooper, along with the likes of a Northern Ireland international in Shayne Lavery but I was proud of my performance.”

It has been a testing season for Institute, and they currently sit bottom of the Premier Division with all football suspended since early March.

The ‘Stute failed to win a match since Brogan broke into the team although they did record draws against Glenavon and Warrenpoint Town.

“Including Linfield I’ve played eight out of nine games available to me. I started seven and came on at half-time in one of the eight.

“Like any step up it takes you a while to get into it but I felt right at home from the first game.

“Obviously the step up in intensity and physicality is a lot tougher compared to underage but it was a challenge I feel I’ve risen to since that first game and built on it week on week.

“It’s tough because we aren’t winning as many games as we’d like but I feel that I have improved my defensive game massively.

“Teams that come up against us think it’ll be easy and I use it for motivation to prove them wrong.”

There is uncertainty regarding how the Irish League will finish now with football stopped for the foreseeable, and nobody can say for sure when it will return.

Institute are bottom of the league with seven matches still to be played and they still have a fighting chance of securing their top-flight future.

Connor has suggested that there should be no relegation and has asked the NIFL (Northern Ireland Football League) to consider introducing a 14-team Premiership next season by promoting two sides from the Championship.

That could be wishful thinking on his behalf but there is still no concrete information on when football will return and that is not ideal for Brogan who is determined to get back on the pitch.

“It’s obviously frustrating that we can’t play or train especially in my first season in the first team.

“It’s disappointing because we had big games coming up and I was looking forward to helping the team to try and avoid relegation.”

Brogan has been training hard by himself as well as studying for his Leaving Cert, although he now knows he won’t have to sit exams in late July.

He is using this period to improve his cardio and strength, as well as technical aspects of his game and hopes to be fitter and stronger when football does return.

“I’m training by myself more than I’ve ever trained before between two and three times a day. Although it’s a negative thing that there’s no football this has given me the opportunity to work hard on improving different aspects.

“Everyone wants football to come back but we have to think of the safety of everyone involved first.

“The health of people has to come first in situations like this. Obviously I miss the football but some things are more important than that.” 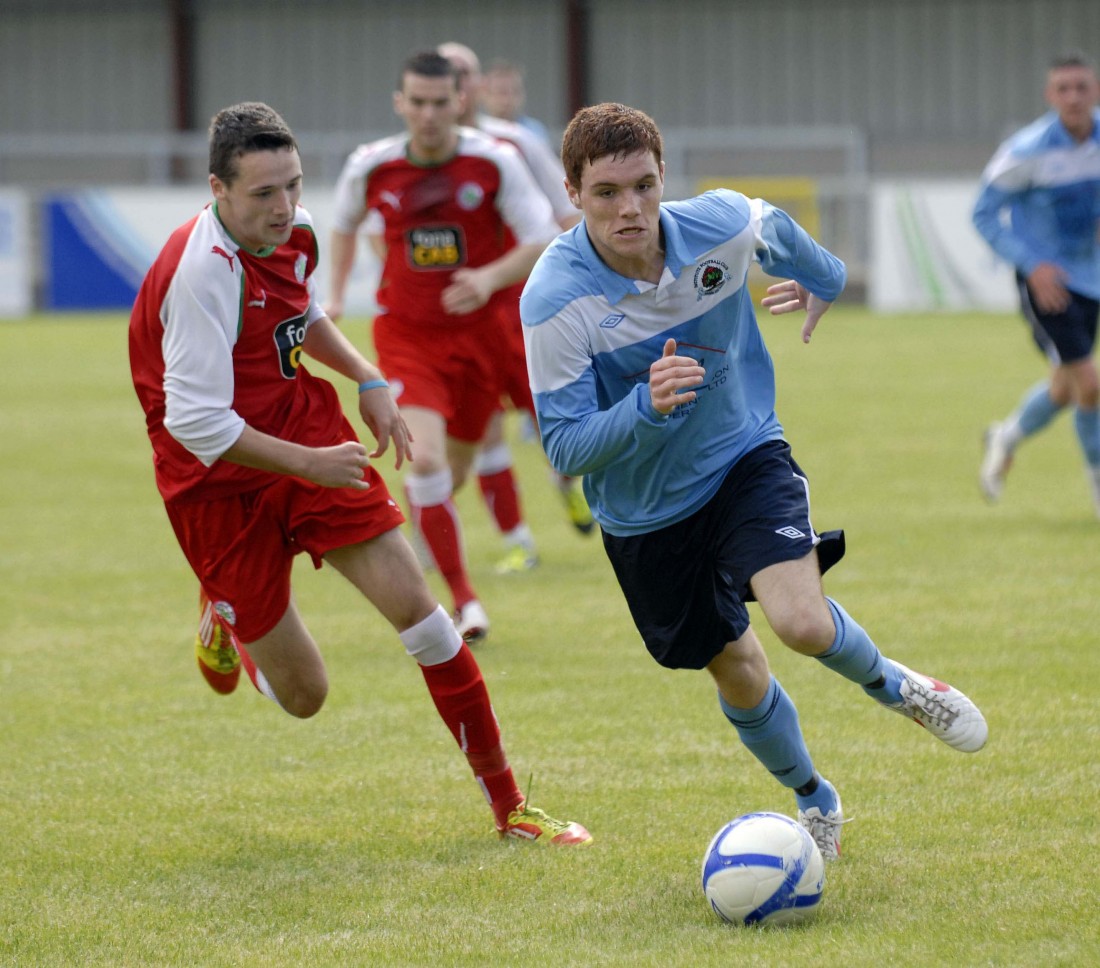