GRAFFITI branding Donegal election candidate Niall McConnell a “racist” has been daubed on the side of a storage container in Derry.

Mr McConnell, a sheep farmer from Castlefinn, stood as an independent nationalist candidate in the general election in February. In a pre-polling day interview with this newspaper he branded Taoiseach Leo Varadkar a “q**** heathen Indian fella who is a friend to big business and a lacky of the banks”.

In the wake of his failed bid for a Dáil seat the Castlefinn man launched his own newspaper, Síol na hÉireann, which features articles on his policies and beliefs.

The graffiti appeared after Mr McConnell and others dropped Síol na hÉireann leaflets along with food parcels in the Creggan Estate. The paintwork was accompanied by a statement issued by the Republican Socialist Youth Movement warning Niall McConnell he would not be welcome back in the area.

“These people offer nothing but hate. A quick browse of their website will confirm that,” read the statement.

“Their politics can be summed up as, racist, sectarian and homophobic. Which begs the question, who did they want to help in the Creggan?

Would they have been offering help if it was someone from the LGBTQ or migrant communities that answered the door? Of course not. Their hatred for the LGBTQ community, those not of the Catholic faith, and migrants is clear to see on their website.

“The RSYM took to the streets to send a message to Niall and his friends in Síol na hÉireann, your [sic] not welcome in the Creggan or any other working class areas. Our class has organised together to defeat Covid-19, it will not be divided by racists.” 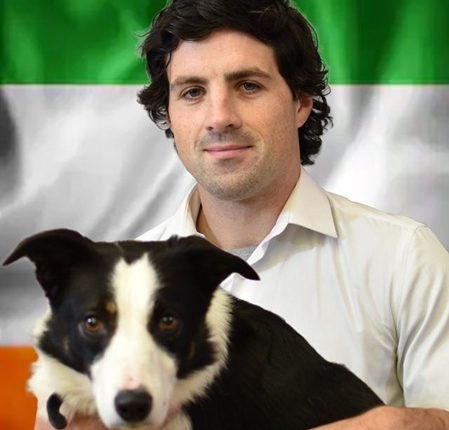 Some of Mr Connell’s election literature.

Mr McConnell told the Donegal News he was “perplexed” by the remarks. He denied that supporters of Síol na hÉireann were racists, describing them instead as “pro-life traditional Catholic Irish nationalists”.

“Yes we strive for a 32 county United Ireland but reject all forms of sectarianism and violence to achieve this, so to be labelled ‘fascist’ for merely helping old and vulnerable people in a socially deprived area of Derry by distributing free food, paid for by our local volunteers, not by grants, is not only ridiculous but disingenuous and potentially very dangerous for our local aid volunteers given the level of violence in the area.”

Adding that he was disappointed by the actions of those responsible for graffiti, Mr McConnell added, “This is sadly what our imperialist masters love, Irishmen and women calling each other names.

“Síol na hÉireann will not add to or subscribe to anymore Irishmen falling for the age old ‘divide and conquer’ tactic that has wrought so much misery to our people over the years.

He added: “If our local Catholic community aid volunteers have to withdraw the free food package initiative from the elderly and vulnerable people in the Creggan area because of threats of violence then what can be said of the state of our Ireland and the political situation?

“We have done nothing but try to help those less fortunate, yet some have reacted by calling Síol na hÉireann fascists with calls that will incite violence against local Catholic volunteers. Yet we are supposed to be the fascists?

“I pray that sense prevails and that the social welfare of our elderly Irish people takes precedence over political ideology and that the community leaders in the area would put divisions aside at least as we all fight the Covid-19 crisis for the sake of our people in the occupied counties and in the rest of Ireland.”