Underdogs usually suffer darkness at the second time of asking, but for Brian McEniff and the class of 2003, it was nothing but sunshine and good memories from a trip to MacHale Park on a balmy August evening 17 years ago.

Galway were a formidable outfit. They were All-Ireland champions in 1998 and 2001 and were beaten in the 2000 decider by Kerry after a replay.

Donegal, in contrast, were a group full of potential, who had been beaten at the quarter-final stage the previous season by Dublin.

Under the guidance of Mickey Moran, they drew with the boys in blue in Croke Park but lost their focus ahead of the replay as social distractions took their toll, and Dublin cantered through to the last four.

Moran didn’t seek another year at the helm and Donegal struggled to appoint a replacement.

1992 All-Ireland winning manager Brian McEniff found himself as County Chairman at the time, and was asked to take on the senior reins on an interim basis to get the show up-and-running.

There was a ten-year anniversary celebration for the ’92 side at which the Bundoran hotelier cornered ‘around seven’ former players and asked them to take on the bainisteoir bib but there were no takers.

Eventually McEniff decided to manage the team, but the league didn’t go to plan and the team were relegated. 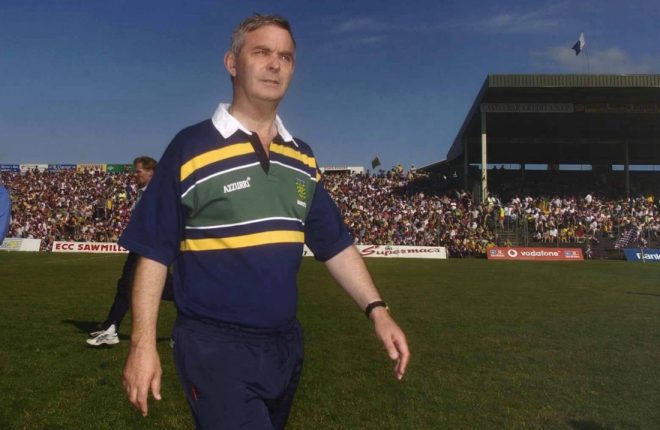 The Ulster Senior Championship quarter-final against Fermanagh also ended in disappointment, with a four-point defeat in Brewster Park.

That sent Donegal to the qualifiers but the scenic route suited the team according to star forward Brendan Devenney.

‘We were more like a southern Ireland team,” said the St Eunan’s clubman.

“Ulster football had got very tactical and physical with Armagh and Tyrone very strong at the time and we struggled against them.

“We were more like the teams down the country like Kerry and Cork and Galway, who played man-on-man.

“The back door was a chance to get away from Ulster teams and we were able to go on a good run.”

First up was Longford in MacCumhaill Park and Donegal saw them off, and Sligo were then put to the sword at the same venue.

Round three pitched Donegal against Declan Browne and Tipperary in a curtain-raiser before the reigning All-Ireland champions Armagh knocked out Dublin at Croke Park.

Down had taken Tyrone to a replay in the Ulster Final, but McEniff’s side proved too strong for them in Clones and that sent Donegal through to the last eight.

“It was a different time and the expectations weren’t as high,” commanding midfielder John Gildea recalled when contacted by the Donegal News this week.

“With the current team everybody expects them to reach the Super 8s and anything less would be a disappointment.

“But with our team, people didn’t really know what they would get, and it was nearly a case of God knows where this will end when we won a match.

“We went on a great run that year and it brought such enjoyment. There’s nothing better than causing a surprise.”

The first game against Galway in Croke Park had proved to be a lively encounter, and Donegal looked like pulling off a shock until Kevin Walsh sent over a 35-metre equaliser.

“We had Galway beat the first day,” said McEniff.

“Then they got a point in injury-time and that took it to a replay.

“I was hoping the game would be played in Sligo which would have been a halfway house.

“But they fixed it for Castlebar right beside Galway in Connacht. I put in a big shout about that in the local and national media and stirred the pot a bit.

“Then when we got to Castlebar on the day, it was awash with green and gold.” 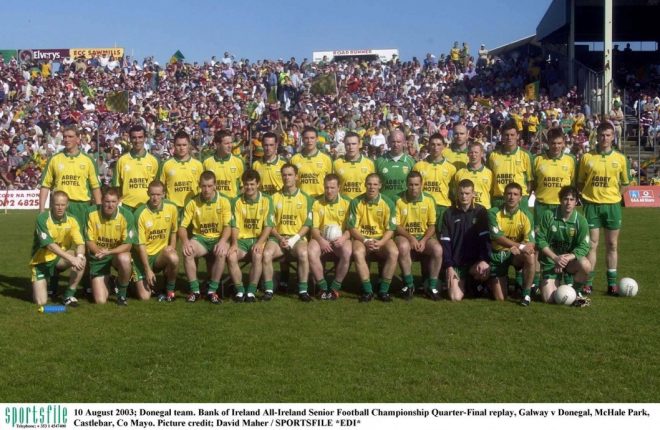 The Donegal team against Galway

The Tribesmen were fancied to finish the deal at the second time of asking, but Donegal weren’t deterred.

There were lessons learned from the previous summer and they backed themselves.

“We did have a great team and I honestly think that that Donegal team would have held their own against any generation,” Gildea commented.

“Ok we maybe didn’t have an exceptional talent like Michael Murphy, but with Brendan Devenney, Adrian Sweeney, Paul McGonagle, Brian Roper, Chrsty Toye and Michael Hegarty, we had a very balanced forward line.”

Devenney had played soccer during the winter and his return for the final league game with Roscommon brought freshness to the team.

However, he didn’t get the injury-free campaign that he had hoped for.

“I had a wild funny summer that year. I actually did a bit of ligament damage against Fermanagh the first day out.

“I missed a few games then and got back in but I wasn’t really training in between matches.

“I was getting ice and treatment with Donal Reid and it wasn’t nice.

“That day in Castlebar I was up against Kieran Fitzgerald of Corofin and it was a real ding-dong battle. It was man-on-man and I enjoyed it.

“I remember going out to the back field to do that warm-up and it just felt like a big championship match.”

From the off, the game had the distinct feel of fate about it.

Donegal were the epitome of economy while Galway looked out of sorts when they entered the opposition’s ’45’. 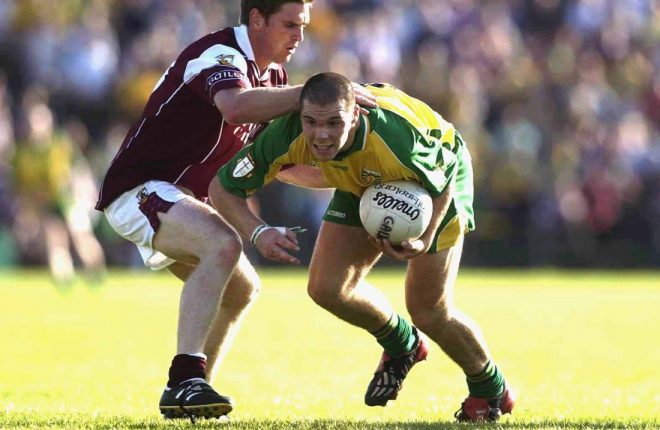 McEniff’s side weren’t at their best in the first half but they still led by 0-9 to 0-6 at the break.

A sharp and focused Devenney was in good form and he kicked three early points, while his inside partner Adrian Sweeney scored two as Donegal opened up a 0-5 to 0-2 lead after 16 minutes.

Devenney, Christy Toye, Sweeney, and Michael Hegarty also landed points in the second quarter, while Padraic Joyce saw a shot come back off the post.

Donegal were three up at the break but the sweltering heat took a large chunk out of their energy reserves.

“There was massive heat in there at half-time and Brian was telling us to open a few windows, it was that warm,” Hegarty said at the time.

“We knew that the first 15 minutes after half-time were going to be crucial.

“We thought that Galway were coming back at us all the time.”

Donegal were bracing themselves for a Galway onslaught after the restart.

However, it didn’t play out like that and Toye, Sweeney, and Ardara’s Brendan Boyle kicked the first three points of the second half.

Galway threatened a comeback but Donegal could sense that they had the run on their opponents with Hegarty landing a point before the team won a free which was within Devenney’s range.

“Myself and Adrian went fairly well in that match and we made a good start to the second half.

“They came back at us and then we won a free and it was at an awkward enough position.

“It was out near the sideline and the supporters were right on top on you. It was a pressure kick but thankfully it went over the bar.”

Donegal battled hard defensively in the closing stages. They did require their goalkeeper Tony Blake to make smart saves from Padraic Joyce and Michael Meehan in the second half, while Shane Carr cleared Matthew Clancy’s shot off the line. However, Donegal were full value for their win.

“We got in front and we managed to stay in front,” said McEniff who was lifted into the air by jubilant supporters after the match.

“They had some brilliant players like Michael Donnellan and the Meehans. Barry Monaghan did a great job on Padraic Joyce.

“To beat a team that had been in three All-Ireland Finals in the five years before that was brilliant.

“Every last one of our players was immense that day.”

It’s estimated that 20,000 of the 30,000 crowd that day were from Donegal and there was sheer delight with the victory.

The players received the adulation of their supporters, and it was a long haul back home, as fans and the team had to drive through towns that are now by-passed and that led to large tailbacks. 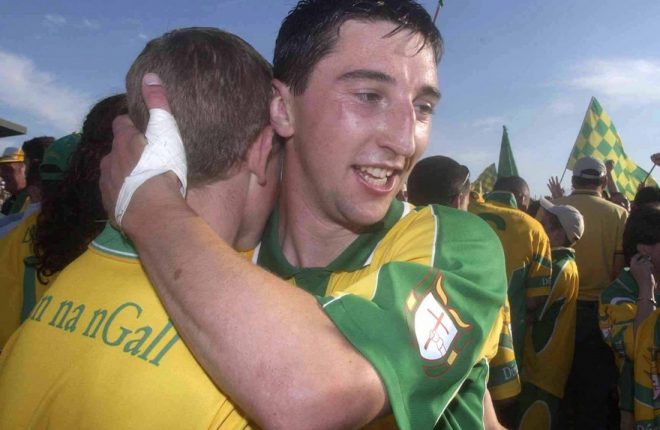 Michael Hegarty celebates after the match

Devenney said: “To be fair the Donegal supporters were always good natured, and they were mad keen to follow us.

“I don’t know if it is just the type of people we are up here fighting our own corner.

“But there was that tradition going back to the seventies when McEniff was playing himself.

“The crowd were brilliant that day and I remember being interviewed by RTE after the match and all the wee kids were around me.

“It was just a brilliant win and I remember the big tailbacks on the way home.

“We were on the bus on the way home and some of the wives and girlfriends were on and we were just having a nice chat down the back.

“Then Patsy McGonagle (a member of the backroom team) stood up down the front and with that big megaphone voice of his shouted, ‘I don’t know what the **** all this is about, but yous have won nothing yet!”

“We just put the head down but I’d say some of the women were scared out of their minds.”

McEniff’s recollection of the trip back differs slightly to Devenney’s.

“There were huge queues in every town up the road.

“We ended up getting a squad car to take us through because there were steaks waiting for us in Sligo.”

There was huge buzz over the next three weeks as Donegal readied themselves for an All-Ireland semi-final with Armagh.

Christy Toye scored a super goal but the Orchard county took control in the second half.

“It was a very enjoyable season,” said Gildea.

“It shouldn’t be forgotten that Mickey Moran had done a huge amount of work with that team as well.

“Brian came in and he was great and making sure everything was in place so that you felt you were going to get the best out of yourself every time you took to the field.

“Brian has been a huge figure in Donegal football and a great servant for probably sixty years at this stage.

“We were pipped in the semi-final by Armagh and I still think a few decisions like Raymond’s (Sweeney) red card went against us and we could have got to an All-Ireland Final.”

Unfortunately many of the team exited the intercounty scene without the medals they craved, although the younger players in the team, Christy Toye and Colm McFadden did taste All-Ireland glory in 2012.

Medals mightn’t be overly plentiful but the memories of that sunny evening in Castlebar remain vivid for McEniff. 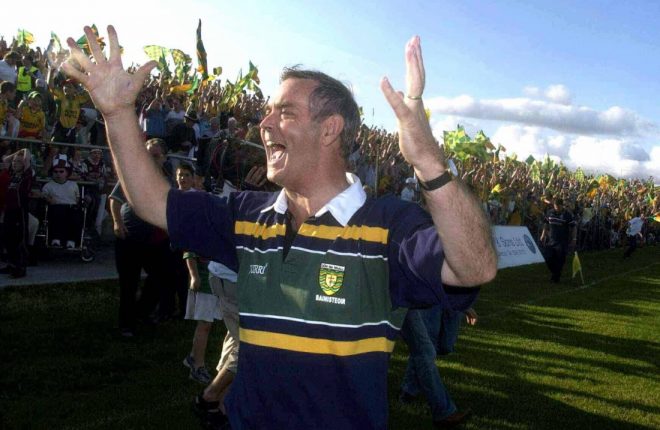 “That was as good of a day as I had with Donegal football.

“I’ll never forget the support we got that day from the Donegal people.

“I got a huge amount of calls after that match. John Cunningham rang me and said it was better than the All-Ireland. That was good enough for me.”