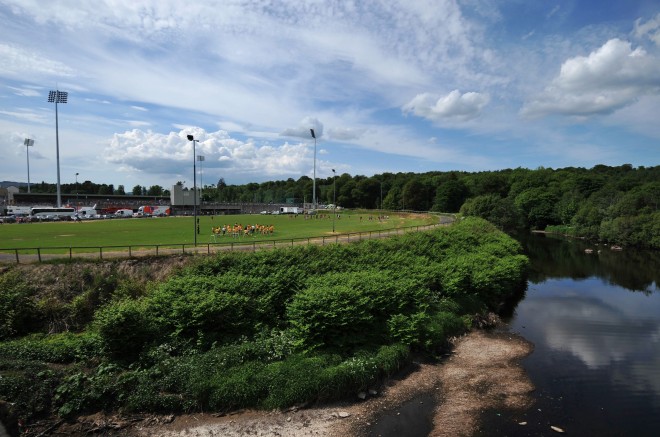 A PROPOSAL by Donegal County Council to remove silt, gravel and boulders along the River Finn as part of ongoing flood relief works in the Twin Towns has been rejected by An Bord Pleanála.

The three locations along the river in Ballybofey and Stranorlar are within the River Finn Special Area of Conservation (SAC) upstream and downstream of the main Ballybofey-Stranorlar bridge along the N15 road.

The Council had sought permission to remove gravel behind Jackson’s Hotel, silt deposits under the main Ballybofey-Stranorlar Bridge and boulders and some rubble under Dreenan bridge.

Further plans to construct two new storm manholes at the bottom of the flood embankments behind Aldi in Ballybofey and the removal of 1.74 hectares of selected vegetation including more than eighty trees and bushes for flood relief along the banks of the River Finn were also rejected by the planning authority.

The proposed works were deemed as essential maintenance to prevent flooding in the town as part of an overall emergency plan where the town is at risk of flooding.

The proposed development is a short-term measure to help prevent flooding in the town during storm events such as what occurred in December 2015.

In making its decision the Board highlighted the absence of an ‘Invasive Species Management Plan’ and the potential to adversely affect the salmon and otter populations within the SAC.

The River Finn is one of the country’s most important salmonid rivers and salmon is a qualifying interest of the River Finn SAC. There are a significant number of breeding redds present within the River Finn directly adjacent to the proposed works.

It was also noted that the river bank is populated on both sides by tall stands of Japanese Knotweed and Himalayan Balsam.

The Board cited the quantity of gravel to be removed and the locations for the re-use of this material, and the potential consequent impacts on the river flows and velocities.

“I consider that based on the information submitted and in particular the absence of an Invasive Species Management Plan, the Local Authority has failed to adequately demonstrate that the proposed development would not give rise to the spread of invasive species present within the works areas proposed and has not adequately demonstrate that the proposed development would not adversely affect the integrity of the European Sites no. 002301 and UK0030320, in view of the sites Conservation Objectives. I therefore consider the proposal to be unacceptable in this regard and recommend that permission is refused,” the report read.

In the council’s 2018-24 county development plan, it is a policy of the Council to consider the development of long and short-term flood remediation works, including embankments, sea defences, drainage channels, and attenuation ponds to alleviate flood risk and damage to livelihoods, property and business.

However, the plan also states that such works would be subject to environmental considerations including potential impact on designated shellfish water and fresh water pearl mussel catchment areas.

The two new storm manholes at the bottom of the flood embankments behind Aldi in Ballybofey would have allowed for over pumping when the level of the Finn rises such that the outlets from the existing drainage can no longer operate successfully.

In addition to the manhole construction, the removal of c. 1.74 hectares of selected vegetation including 81 trees and bushes for flood relief along the banks of the River Finn was proposed.

The other proposal sought to remove silt, gravels and boulder deposits at three locations within the River Finn.

Location 1 – is an area located behind Jacksons Hotel in Ballybofey where a large gravel bank has emerged due to the deposition of river gravels and sediments at this location. It had been proposed to remove these gravels to below ambient river levels and use the surplus gravel for the creation of suitable spawning salmon habitat within the three areas of the River Finn.

Location 2 – is located under the main Ballybofey / Stranorlar Bridge where large deposits have built up within two arches of the bridge and 15 metres downstream. Works in this area are proposed to remove the silt and sediment deposits from the effected arches of the bridge. It is stated that this material is to be removed to a bunded deposition area on-site for ongoing treatment due to the existence of invasive plant material such as Himalayan Balsam within these sediments.