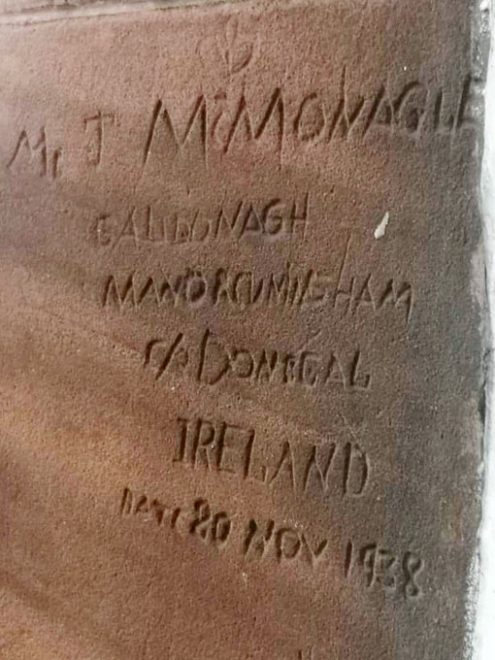 The inscription from 1938 uncovered at the Edinburgh hotel.

A ROUTINE maintenance check of a bedroom in one of Scotland’s most prestigious hotels has unearthed an engraving that is attracting much interest in Donegal.
A member of the maintenance team at the 5-star Waldorf Astoria Edinburgh – The Caledonian discovered the engraving bearing the name of J McMonagle, Galdonagh, Manorcunningham, Co Donegal, Ireland. It is dated November 20, 1938.
Catherine Jackson, Marketing & PR Manager, Waldorf Astoria Edinburgh – The Caledonian, said they are curious to learn what came of Mr McMonagle and have asked if anyone knows of him or his family.
“It was just a routine maintenance check of the room. The engraving is not covered up or concealed, you can see it outside the bedroom window,” Ms Jackson said. The engraving is on the exterior of the hotel and can be seen out of the window of bedroom 118.
“Nigel Edwards (maintenance man) is an ex-tradesman and believes that as the engraving has been done with specialist equipment and includes a full address, it must be a builder’s tag,” she added.
The Waldorf Astoria Edinburgh – The Caledonian, or the ‘Caley’ as it has become affectionately known among Edinburgh folk, was and still is the epitome of style and excellence.
The large, rose-coloured Permian sandstone facade dominates the skyline of the city’s west end. Created out of the 19th century railway boom, the five star hotel first opened its doors in 1903.