THE mystery surrounding the identity of the man whose inscription was discovered on the wall of one of Scotland’s most prestigious hotels has been solved.
An engraving bearing the name of J McMonagle, Galdonagh, Manorcunningham, Co Donegal, Ireland was unearthed on a wall at the 5-star Waldorf Astoria Edinburgh – The Caledonian. It was dated November 20, 1938.
The story about how a routine maintenance check of a bedroom unearthed the engraving in last week’s edition under the heading ‘Mr J McMonagle wanted’ attracted much interest in both Donegal and Scotland.
John Joseph McMonagle was born in Galdonagh, Manorcunningham, on December 20, 1920 and moved to Scotland as a young man where he trained as a chef in the Caledonian Hotel and, later, St Andrews. He returned home to Ireland and bought the Achill Head Hotel in 1950. His son Vincent was born in Achill Head in ‘54.
“Dad married Mary English who was born in Edinburgh but whose family originated from Achill Island. He was one of nine children and he left Donegal as a young man and trained to be a chef. That’s how he came to be in the ‘Caley at that time,” Vincent explained.
He later joined the merchant navy and served on MV Miralda (MAC SHIP), MV Dingledale ( MAC SHIP) and Brown Ranger (submarine).
“Dad was part of Operation Pedestal (a British operation to carry supplies to Malta in August 1942, during the Second World War) while he also served in Murmansk, Canada and West Africa. He was torpedoed a few times but I have not found details of sinkings,” he said.
On his return home, John Joseph McMonagle bought the Achill Head Hotel 1950. He would also purchase Corrymore House on Achill Island (Captain Boycott’s House) and Curraghmore House Ballinrobe (Humanity Martin’s House )
“He holds the Irish Record for the Blue Shark (209lbs in 1959) and had several engineering inventions including Hydraulic Doors. Dad also built the first Cinema Scope Cinema outside the Savoy in Dublin on Achill Island,” Vincent said.
John Joseph McMonagle passed away in May, 1981, aged 61 years. His son Vincent now lives in Wexford.
Catherine Jackson, Marketing & PR Manager, Waldorf Astoria Edinburgh – The Caledonian, said they had been curious to learn what came of Mr McMonagle and had asked if anyone knew of him or his family.
“It was just a routine maintenance check of the room. The engraving is not covered up or concealed, you can see it outside the bedroom window,” Ms Jackson said. The engraving, which was discovered by maintenace man Nigel Edwards, is on the exterior of the hotel and can be seen out of the window of bedroom 118. The Waldorf Astoria Edinburgh – The Caledonian, or the “Caley” as it has become affectionately known among Edinburgh folk, was and still is the epitome of style and excellence. The five star hotel first opened its doors in 1903. 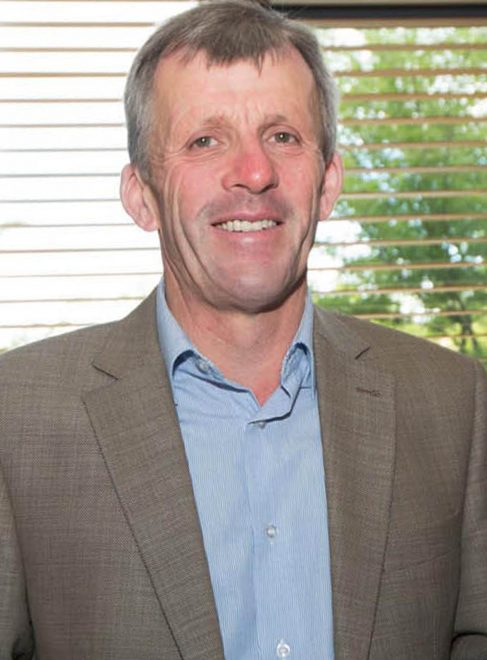 Brendan McLaughlin, who farms 86 acres at Balleighan had been treating a sick calf on Sunday, April 22, when...

The 66-year-old sustained serious leg injuries as he instinctively tried to jump out of the heifer’s path at the...