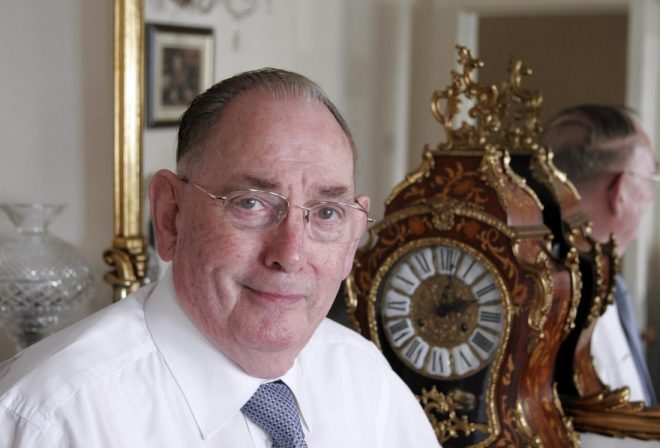 PJ Dawson at his home in Letterkenny.

TRAGEDY has struck a well known Letterkenny family with a brother and sister dying within twenty-four hours of each other this week.
Pat Dawson (90), Port Road, who ran a wholesale stationary business for many years, passed away at Beaumont Hospital, Dublin, on Tuesday. His sister Mona Dorrian (89), 12, Ard Colmcille, died in Letterkenny the previous day on February 10, and will be buried this morning, Thursday, February 13.
A well-known Republican, Mr Dawson was a member of Sinn Féin for more than sixty-five years. He was the first person in the State to be arrested under the Offences Against the State Act in 1972 – for membership of the party’s military wing, the Irish Republican Army.
Fiercely proud of his republican roots, Mr Dawson took some time out to chart the history of Sinn Féin in Letterkenny in an interview with the Donegal News in 2005 as the centenary year of the party drew to a close.
His late grandfather Patrick Dawson formed the first Sinn Féin Cumann in Letterkenny in 1905 and was made a Sinn Féin judge. Court was held in a room in McCarry’s Hotel, which is now part of Gallagher’s Hotel.
Reflecting back on his own time as a ‘volunteer’ Mr Dawson said that he was arrested with four other Republicans in Castlefin in 1957.
“We had five machine guns and 800 rounds of ammunition which were taken off us. We were sentenced to three years in jail. We were initially interned in the ‘Glasshouse’ before being moved to the Curragh.
“In 1972, I was the first person in the State to be arrested under the new Offences Against the State Act. I was charged with membership of the IRA and Patrick McEntee was my defence counsel. I was told by a Government Minister two weeks before I was arrested about what was going to happen. I was arrested on December 13, 1972 and the trial lasted until April the following year. I was given permission by the organisation to recognise the court and all charges were eventually dropped. Even the Special Branch boys who came out to arrest me told me they didn’t want to do it – they were acting on orders which came down from Dublin,” he said.
A member of the old St Eunan’s Cathedral Choir, Mr Dawson was well known throughout the local community.
Predeceased by his wife Mary, he is survived by his daughter Dara Gallagher and son-in-law Damian (Letterkenny), son Pauric and daughter-in-law Celine (Creeslough), grandchildren Conor, Caitlin, Aidan, Anthony and Niamh, nieces, nephews and a wide circle of family and friends.
Funeral Mass on Friday in St Eunan’s Cathedral, Letterkenny at 10am with interment afterwards in Conwal Cemetery.
Mona Dorrian (89) 12, Ard Colmcille, Letterkenny, was a woman of great faith. She worked in Fenton’s Electrical shop on the Main Street as a young woman.
Predeceased by her husband John (Johnny) she is sadly missed and deeply regretted by her sons John and Michael and daughter Helen Johnston (Letterkenny), daughters-in-law Roisin and Kathleen, sister-in-law Sadie Dawson (Letterkenny), grandchildren, in-laws, nieces, nephews, relatives and friends.
Mona’s remains are reposing at her late residence with funeral from there today, Thursday, going to St. Eunan’s Cathedral, Letterkenny for 10am Requiem Mass with interment afterwards in the family plot in Conwal Cemetery. The main celebrant will be Fr Brendan Ward, Church of the Irish Martyrs while the music will be under the direction of Gabrielle Fitzsimons.
SHARE