NO Donegal club reached an All-Ireland Club Final this year, but there will be a Raphoe man on the sideline for the Junior decider on Saturday.

John Michael Porter has been domiciled in Wexford for more than two decades, and this weekend, he will be on the backroom team as his adopted club Rathgarogue-Cushinstown take on Na Gaeil from Kerry.

Porter is Principal of St Mary’s Secondary School, New Ross, having previously worked as a PE teacher at the Christian Brothers School in the same town.

Rathgarogue-Cushinstown do not have a big town from which to draw their players, but they do have a great collective spirit and Porter says the whole community is looking forward to travelling to the GAA’s Headquarters for a triple-header (the All-Ireland Intermediate Final and Dublin v Kerry will take place after).

“There is great excitement,” Porter told the Donegal News this week, as he helped put the final touches to their game plan for the weekend.

“We are an area that is only a few miles outside of New Ross.

“It is a big wide parish, but there is no village as such. There are three different churches and a couple of pubs and shops but no main town.

“The GAA club is pretty much the centre of the community so you can imagine the buzz around.”

Porter admits that he would be best known for a different type of football than gaelic, but he has really enjoyed his role with Rathgarogue-Cushinstown, which has seen them secure Wexford and Leinster titles already this season.

“Even the language is different,” he laughed.

“At home, soccer is called football, and gaelic is called gaelic.

“But down here soccer is soccer and gaelic is football. I would have played underage with Convoy but then when I went to college in Limerick for four years, you could only really play one and I was better at soccer.

“I would have been involved with New Ross Celtic and played for the Wexford Oscar Traynor Cup team for 13 years. I was a reasonable enough junior player.

“I got involved in coaching then and hold a UEFA A Licence. I was part of the Irish Schools Management team for six years – two as manager, two as coach and two as Assistant Manager. The likes of Ollie (Horgan), James Rodgers, Sean Carr, and Alex Harkin would all have been involved too.

“Seamus Coleman would have been in one of those teams I was involved with.

“I was a PE teacher for 23 years and would have coached a few gaelic teams in that time as well, and would have helped out at the local club when Eoin started playing which was about 14 years ago.

“When the current senior manager (James Bolger) took over, he knew I had helped out before and he got me back involved, and we have been lucky to have had two great years.”

John Michael’s son Eoin has also changed codes after playing in the League of Ireland a few years ago.

He is a key player for Rathgarogue-Cushinstown and will represent Wexford this year under the guidance of a high-profile figure. 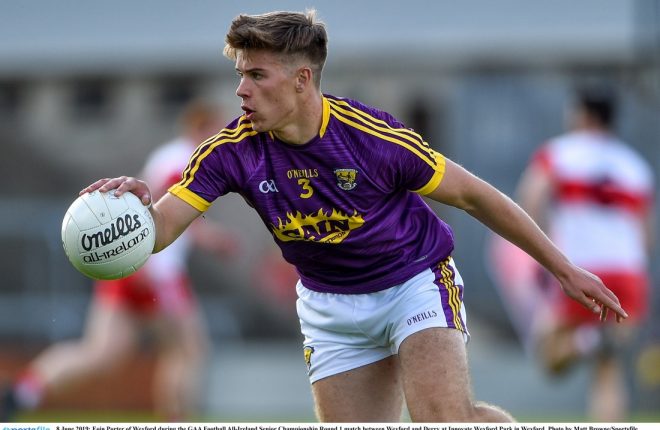 “Then when he went to college in Dublin, he tried to link up with a few clubs but it just didn’t work out.

“He was more of a centre forward in soccer, but he plays as centre back with us in the gaelic.

“He was involved with Wexford last year and he is again this year although it has been a bit disrupted with our run.

“Paul Galvin is in as manager now and that has created a bit of a buzz. It’s a great opportunity to work with him and learn from him, and hopefully gain from that winning mentality he had when he played with Kerry.”

Rath/Cush saw off Blackhill by a point in the semi-final and that was noteworthy as the Monaghan side had beaten Donegal champions Buncrana in the Ulster Final.

“Blackhill were a very good team and a seasoned team.

“They will have been disappointed as they missed a couple of goal chances on the day but our defenders did their job and kept them out and we will be hoping that they can do so again.

“We would have no real star players in our team but every game someone else pops up with an important score.

“From what I gather in Donegal, Buncrana were a junior team that would have played in higher leagues.

“It’s the same in Wexford. We would have beaten teams higher up than us but we struggled just to get out of the Junior before this year.”

Porter has a busy schedule but he still enjoys getting back home to Donegal three or four times a year.

However, it’s all about Rathgarogue-Cushinstown and their final this weekend.

They certainly have a tall assignment as Na Gaeil have two Kerry players, and representatives from the Kingdom have won four of the last five All-Ireland Junior titles.

Rath/Cush are the first Wexford team to ever reach an All-Ireland Club Final, and they are hoping the ball will bounce their way on Saturday.

“It will be a very difficult game for us but it is a great challenge for our players on the biggest stage.

“Our captain plays in midfield and he will be relishing the opportunity to go up against Diarmuid O’Connor or Jack Barry.

“We just hope we go there and perform. A Sligo team (Easkey) went up there last year and froze on the day and were beat by 21 points.

“We just hope that doesn’t happen. If we go and play to our potential and they are a better team then we can live with that.

“We’re not going up there for the occasion. It’s great to be going to Croke Park for the community and people who have served the club so well.

“But for the team, it’s just another pitch and hopefully we can win.”