Advertisement
HomeHeadlinesNo room to improve for Gleneely man on Winning Streak
Advertisement
A DONEGAL man is celebrating this week after winning a timely €21,000, just weeks after completing a major refurbishment of his new home.
Adrian Duffy from Gleneely appeared on the Winning Streak National Lottery TV game show last Saturday. 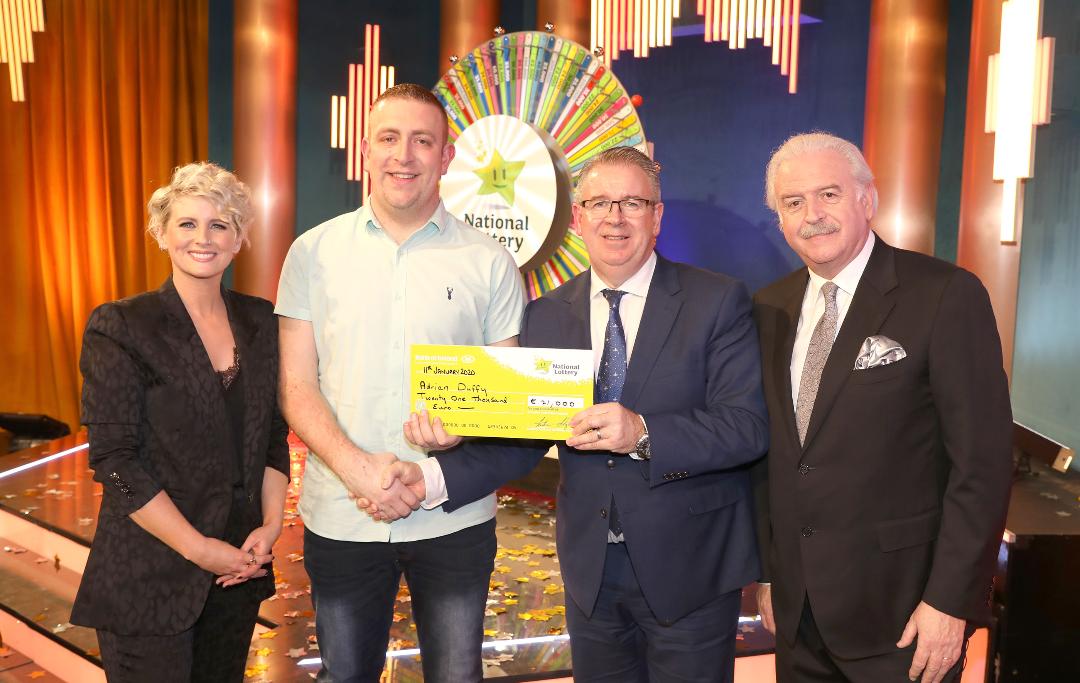 Five weeks ago, Adrian was sitting in the local pub enjoying a few drinks the night before his birthday (which was on 8th December) when he got a call to say his name was drawn to appear on the next Winning Streak show, in January 2020. Call after call came through and he spent the rest of the evening celebrating his luck while replying to calls and text messages congratulating him. What a start to Christmas for the Donegal man.
Adrian was happy with having to wait five weeks for his Winning Streak appearance as he has just moved into his new refurbished home with his girlfriend Lisa. The couple, who have been together for more than five years, bought their first house in May, which needed a bit of work, so Adrian had been working away on it with every spare hour he had. The couple moved in just a couple of days before Christmas. It has been a busy time for Adrian, who works as a Bid Manager for Boyle Construction in Letterkenny, where he has worked for almost three years.
Lisa, his parents Eileen and Charlie and his sister Catriona cheered him on this weekend from the audience. They were be joined by a number of Adrian’s friends and other members of the family.
In his spare time, Adrian loves sport and plays soccer for Gleneely Colts FC, where he plies his trade in centre midfield. He is also a keen golfer and plays off 6 at his local club in Ballyliffen.
The Winning Streak National Lottery TV game show is co-presented by Marty Whelan and Sinead Kennedy and features some perennial favourite games including Play or Pay, Roll for Riches, WinFall and Electric Dream – where one player will win an electric car worth €25,000.
As ever one of the lucky five players will get the chance to spin the wheel and win up to €500,000. An exciting element of the show is that one €100,000 segment will be added to the Grand Prize Wheel every show if less than that amount was won in the previous show, improving players chances to win a massive prize.
A brand new-look Winning Streak scratch card is available in more than 5,800 National Lottery retailers all over the country. In addition to the chance to appear on the Winning Streak TV game show if you get three stars, players will also be in with a chance to win some great cash prizes up to €5,000. The odds to win for those who purchase a Winning Streak scratch card are 1 in 1.86 to win a cash or three star prize. All players who purchase a scratch card can send their stubs into the National Lottery using grey envelopes, available in all National Lottery agents, where each week on the show, a player will be drawn as the winner of a Luxury Cruise for two valued at €5,000.
Nearly 30 cent in every €1 spent on Winning Streak and all National Lottery games goes back to Good Causes in the areas of sport, youth, health, welfare, education, arts, heritage and the Irish Language. In total more than €5.5 Billion has been raised for Good Causes since the National Lottery was established 32 years ago. In 2019 alone, €250 million was raised for local Good Causes in communities across Ireland.