Advertisement
HomeBreaking NewsLetterkenny estate turns 50 with a smile
Advertisement
RESIDENTS of McNeely Villas spent any enjoyable afternoon earlier this week remembering the past, enjoying the present and looking forward to the future as they celebrated the Letterkenny estate’s 50th birthday.
The council built McNeely Villas in 1969 to accommodate the growing family population within the Oldtown area. The estate of 40 houses was built adjacent to the former Gaeltex factory. In more recent times, four extra houses were added to a space at the entrance to the estate.
This year marks the 50th anniversary of the formation of the estate and one third of the residents who were first handed the keys to their new homes in 1970 still live in McNeely Villas.
Some of them including Aileen Lafferty, Katty McGough and Hannah McDaid gathered in No 20, the home of Stephen and Kay McDaid, on Tuesday afternoon to reminisce.
St Eunan’s College, the Vocational School and the Loreto Convent were part of the local education culture. Some residents have since moved back to teach in the local primary and secondary schools with many others employed in the locality. Others chose to move away from Letterkenny and Donegal in search of work but they’ll forever refer to the Oldtown as home.
The residents association has been the backbone of the community over the years and McNeely Villas has been steeped in the local sports scene from St Eunan’s GAA club and soccer with Letterkenny Rovers, to athletics with Letterkenny AC. There’s been dance groups and bands, choirs and musical groups, all backed up by local volunteers that reflect the community spirit that has always been alive and well in McNeely Villas. 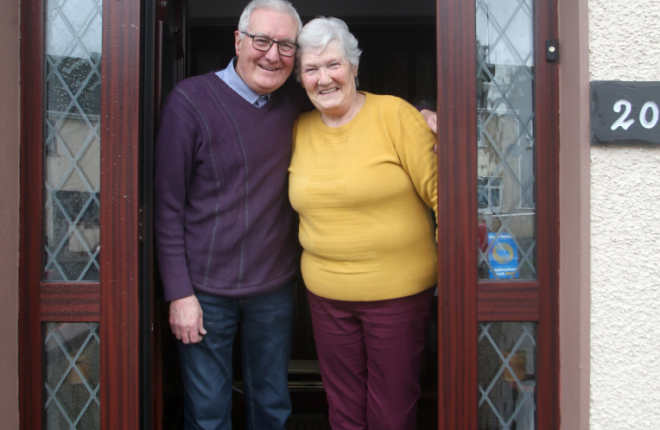 Stephen McDaid remembered the set of house keys being turned over to himself, his wife Kay and their four young children, as the new residents of No 20 McNeely Villas.
“Initially, number 20 was in a different part of the estate and we had measured floors for lino and windows for curtains for that house only to find that the post office had numbered the estate different to the numbers used by the contractors. That said, we were only too delighted to get a house so we just measured our new house and moved in,” he recalled.
A former Labour Senator, Sean Maloney, and Letterkenny Town Council Mayor Victor Fisher were among the first residents. The local football pitch provided hours of entertainment for children of the locality as did the set of swings at the top of the estate.
“We always left the front door open and when the kids started going out they never needed to carry a key. We always left the back door open,” Hannah McDaid recalled.
“It was a great estate and we loved living here. It was fantastic,” Stephen McDaid added.
“The kids used to go out and play in the mornings and we wouldn’t see them again until dinner time. The nearby Model Bakery was very good to them all with Tommy McCafferty feeding them the odd bun,” Katty McGough smiled.
It was a similar story when the young people started to go out at night.
“When they went to the dances you always knew that they were safe. The boys looked after the girls and they all walked home together down through the town,” Aileen Lafferty said.
It was a time when the Model Bakery, Nestles and Gaeltex were big local employers and Roulston’s Coal Yard stood where Dunnes Stores now trades. Joe Bonner’s Foundry was located at Skittle Alley and Hamiltons and Griers were names above local shop doors.
Dillons Supermarket on the Main Street – complete with their Green Shield Stamps – was the local supermarket while Charlie Devlin’s mobile shop also provided a valuable local resource.
Mothers and young children in prams could walk out the Rockhill Road in peace – meeting only the occasional army vehicle and car along the way. 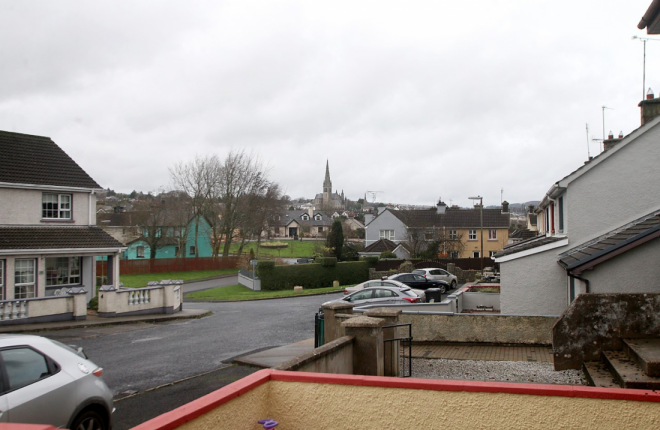 McNeely Villas with Letterkenny cathedral in the background.

“We were nearly out the country and I could walk out the Rockhill road with a big pram and meet little to no traffic,” Katty McGough said.
The estate, which was named after the then Bishop of Raphoe, Bishop McNeely, was developed by Con Harvey and houses cost £2,400. The estate was completed nearly a year before the list of 40 tenants chosen was finalised.
A report in the Donegal News at that time showed that Letterkenny Urban Council had a marathon monthly meeting during which it emerged that applications for the new Oldtown houses were to be reinvestigated.
There was considerable criticism of the allocation of six of the houses to married couples without children, and seven to couples with only one child, while others were larger families were passed over.
“We started off in a flat at Lower Main Street and waited patiently on the new house. We had three children before we came here. It was like moving into a palace,” Katty McGough said.
Hannah McDaid, who was living with her husband’s parents in Rossbracken at the time, was one of those applicants who were initially turned down.
“When they let the houses put initially they only let out 38 and left two – numbers 8 and 18. We started to look to see why we didn’t get a house with three young children and we got number 8 after the next meeting while Celine (Kirwan) got number 18,” Hannah McDaid said.
“When I went looking about a house I was told that if I was pregnant again I might stand a better chance,” Aileen Lafferty laughed.
“We got a good house and good neighbours. It worked out very well,” Katty McGough said.
“We all had young families and we all grew up together. They were good times. Now our children have kids of their own and some of us are even great grand-parents,” she added.
The late Margaret Doherty used to keep the council on their toes.
“We like to keep the place clean and tidy and while the Council do cut the grass they don’t pick it up off the road after them. Margaret (Doherty) used to keep at them to make sure things were done right,” Aileen Lafferty said.
“It wasn’t easy in the beginning. People couldn’t afford to paint their houses as the money wasn’t there but, gradually, we all got there,” she added.
Motor cars were a rare enough sight within the Villas in the early years although Hughie McDaid, who worked with Donegal Oil, had both a company van and car.
“We all walked up to Mass and up the town but neighbours were good if anyone needed a life. There weren’t too many phones here at the time either and they felt we didn’t need them as we lived in Council houses,” Stephen McDaid said.
Every second house was fitted with a range and many conversations were held around the clothesline.
“That’s where we done all our chatting – shouting to one another over the clothes,” Aileen Lafferty laughed.
MCNEELY VILLAS RESIDENTS
1. George and Maud Gormley
3 Joan McHugh
5. Victor and Helen Fisher
7. John and Aileen Lafferty
9. Tony and Rosie McCarron
11. Daisy and Anthony Blake
13. Seamus and Mary McGroarty
15. Eunan and Mary Doherty
17. Johnny and Veronica Gallagher
19. Eddie and Mrs Crerand
21. Patsy and Katty McGough
23. Billy and Mrs Martin
25. Dessie and Annette Kelly
27. Michael and May Toner
29. Palla and Bridget McGinley
31. Bertie and Mary O’Donnell
33. Thomas and Kathleen Keogh
35 Danny and Margaret Doherty
37. Paddy and Cissie McDaid
39. Sean and Sally Maloney
41 Gerry and Gretta Daly
43 Johnny and Mary Diver
2. Jim and Maureen Sweeney
4. John Gorey and Betty Curran
6. Finbar and Cissie Glackin
8. Hugh and Hannah McDaid
10. Kapil and Margaret Varma
12. Christy and Mary Murray
14. Jean and Frankie McMonagle
16. Oliver and Margaret O’Donnell
18. Ken and Celine Kirwan
20. Stephen and Kay McDaid
22. Mickey and Lizzie Doherty
24. Alec and Anne Larkin
26. Patsy and Mary Hamilton
28. Tom and Margaret Kelly
30. Lizzie Doherty and family
32. Joe and Nan Boyle
34. Tommy and Dorothy Pyper
36. James and Evelyn Whoriskey