THE death has taken place in Derry of Rt Rev Dr James Mehaffey, a former Bishop of the Diocese of Derry and Raphoe and one of the North West’s best-known Church leaders of recent times.

Bishop Mehaffey, who was 88, died peacefully on Monday evening surrounded by his family. Dr Mehaffey led the Diocese of Derry and Raphoe for over 20 years, from his consecration in September 1980 until his retirement in January 2002. Last May, a Service of Thanksgiving was held in St Columb’s Cathedral in Derry to mark the 65th anniversary of the bishop’s ordination.

Publicly, Dr Mehaffey – who was born near Portadown in County Armagh – is probably best known for the extraordinarily close friendship he developed with one of his Catholic counterparts, the Bishop of Derry, Most Rev Dr Edward Daly. The two men’s joint ministry during some of the worst years of the Troubles – when they released joint statements, took part in foreign trips together and jointly led carol services – was an inspiration to many in the North West and beyond.

The two bishops were founder members of the Inner City Trust, an organisation which was responsible for rebuilding much of Derry’s bomb-damaged city centre, and they served together for many years on the trust’s board.

During his time as bishop, Dr Mehaffey officiated at numerous funerals of parishioners who had lost their lives as a result of violence, among them members of the RUC and the Ulster Defence Regiment. He was a trenchant opponent of the use of violence for political ends, a tireless advocate for reconciliation in Northern Ireland and a staunch supporter of the peace process.

Th Rt Revd Andrew Forster – who was consecrated Bishop of Derry and Raphoe last month – said that at a time when churches were often being depicted as part of the problem in Northern Ireland, Bishop James and Bishop Edward became part of the solution.

“I am deeply saddened by the news of the death of my eminent and much-loved predecessor,” Bishop Forster said. “I never had the privilege of serving under Bishop James, but I was well aware of his reputation. How could I not be? He was a towering figure within the Diocese of Derry and Raphoe in particular and the Church of Ireland generally, and recognition of his achievements transcended diocesan and denominational boundaries.

“A great many of us were struck by – and, indeed, influenced by – his close friendship with Bishop Edward Daly. A great many more of us benefitted as a result of that friendship, even if we didn’t know it at the time.

“During the worst of times in our history, when churches were often being depicted as part of the problem in Northern Ireland, Bishop James and Bishop Edward became part of the solution. The seeds of reconciliation they helped sow eventually brought forth a rich fruit. The two bishops’ example – their joint example – of Christian witness, was and continues to be an inspiration to those of us who follow in their footsteps.

“Bishop James was a man of great faith and remarkable foresight. His gentle nature belied an inner strength that equipped him perfectly for the role of Bishop. His clergy were blessed by his care and concern for them and for their families, and touched by his wider concern for all people in the diocese. He was a gifted pastor and a faithful follower of Christ.

“I offer my deepest condolences to Bishop James’s beloved wife, Thelma, to their daughter Wendy and son Tim. When the family’s grief subsides, they will have the consolation of recalling a long life well-lived.

“In the meantime, we give thanks to God for Bishop James’s long and faithful ministry.”

“It was with sadness that I heard about the death of Bishop James Mehaffey,” Dr McKeown said. “He served as Bishop of the Diocese of Derry and Raphoe for almost 22 years in very difficult times. 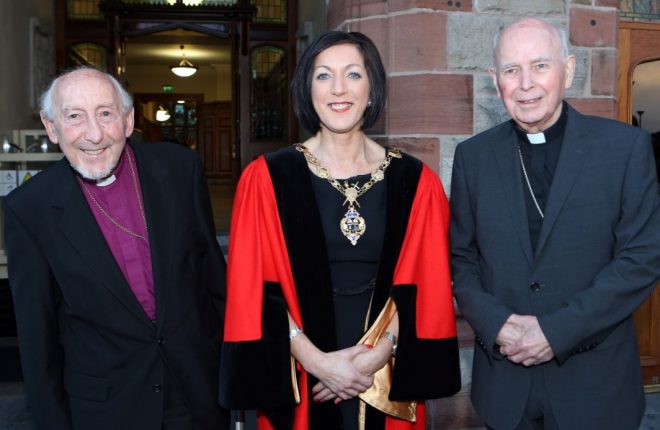 “During those years he developed a very significant personal friendship and partnership with Bishop Edward Daly which gave witness to a powerful message of harmony and peace building. By their faith-filled example and courage, they laid foundations of trust, respect and dialogue on which the current generation has been able to build. They helped us develop a shared narrative about our chequered past – and that is a key part of constructing a shared future.

“I extend my sympathy to his wife Thelma and family. May he rest in peace.”

Bishop Mehaffey, who had been ill in recent years, is survived by his wife, Thelma – who cared for him devotedly – and by their children Wendy and Tim. Dr Mehaffey was pre-deceased by the couple’s son, Philip. in June 1993.

Funeral details are still being finalised but it is expected that a Service of Thanksgiving for Dr Mehaffey’s life will take place in St Columb’s Cathedral later this week. In the meantime, the family have said that visitors will be welcome to pay their respects at the Bishop’s home in Clearwater off the Limavady Road in Derry except between the hours of 11pm and 11am when it will be strictly house private.