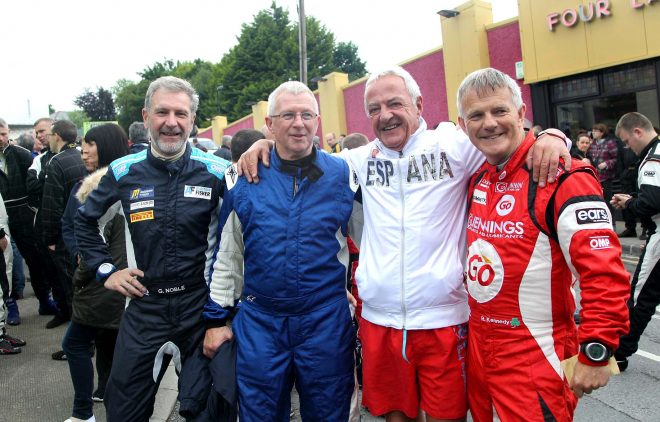 THE Donegal Motor Club will celebrate their 50th Anniversary at a special function in Logue’s of Cranford on Saturday afternoon at 4pm.
All former members, current members and competitors over the years will be welcome on the evening. There will be nostalgic videos and old photos spanning the past fifty years and MC will be Highland Radio’s Oisin Kelly.
The motor club hosts additional rallies such as the harvest rally and the forestry rally.
The club was formed in January 1970 at a meeting in the old Milford Hotel and the late John McClean, a garage proprietor in Letterkenny, was its first President. The chairman was Seamus Kernan (Newtowncunningham) while Robert Ward (Kerrykeel) and Phonsie McElwee (Milford) were appointed treasurer and secretary respectively.
Last summer Mr McElwee, an undertaker in Milford, was presented with the ‘Godfather of the Donegal International Rally’ trophy by Damien Crawford of the Donegal Motor Club.
This week, Mr McElwee took a trip down memory lane and recalled that first meeting which was also attended by the late Derek McMahon.
“There were up to twenty people at that first meeting and it was Derek, Robert (Ward) and I who came up with the idea of starting the rally.
“Robert and I went to Enniskillen to meet rallying great Austin Fraser and Omagh to see another great rallying man Harry Johnston,” he recalled.
“I’ve nothing but good memories from that time and I’m delighted that the rally has gone from strength to strength. I’m looking forward to meeting a few familiar faces on Saturday,” he said.
The Circuit of Ireland rally used to visit Donegal in the 1960s while there were also successful rallies in Kerry and Galway.
“We reckoned that Donegal could do with a boost at that time so we decided to set up the motor club. It provided a great boost to the economy with hotels and guest houses booked out across the county,” he said.
The Motor Club’s first rally was a stages event, based in Cranford, at Easter in 1970 with some petrol economy runs and other small rallies. The Rally of the Rosses, based in Dungloe, followed in 1971 with the Donegal International starting in 1972.
“I used to run the cinema in Milford at the time and travelled to Dublin on a Monday to get the films for that week. One Monday I called into the RAC, who controlled motorsport in Ireland at the time, and persuaded them that we were capable of running an International rally. We were only a year in existence at the time but they gave it to me.
“After three or four further meetings of the club they agreed to let me apply to the RAC but sure I already had an agreement in place,” he laughed.
The Donegal International Rally attracted a lot of foreign entries in the early years which led to its own problems.
“I couldn’t speak French so I used to call on Phil Coulter who was able to speak to these people on our behalf,” he said.
The Rally was based out of the Rosapenna Hotel until its sale when it then moved to the Ballyraine Hotel (now the Mount Errigal) where it remains to this day.
“Manus Shiels of the Milford Bakery had the Ballyraine Hotel at the time and he persuaded me to bring it there,” he said.
While Phonsie competed alongside Robert Ward in the Galway and Kerry Rallies he never managed to take part in Donegal.
“I was always too busy,” he said.
Phonsie stepped down from his role at secretary in 1976 but he continues to meet up with a group of friends at “the Donegal” each summer.
They include Terence Donnolly – Donnolly Group Dungannon; Jack Cassidy – BMW Cars, Coleraine; Kieran McAnallen – Armagh City Hotel owner; John Conway, who ran Meteor Electrical in Coosktown and Cathal Curley – Curley Cars, Derry who won the Donegal Rally three years in a row.
“We still meet up in Donegal every summer. As we get older those meetings now take place three or four times a year. I’ve met a lot of good friends through the sport,” he said.