THE curtain will come down next week on one of Donegal’s longest running family enterprises.

From Monday the keys to JJ Reid Motors will pass to the Connolly Motor Group, bringing to an end almost 60 years of local history.

“It is the end of an era for both JJ Reid Motors and for the extended family in the passing of a much loved family member. But it is also hugely positive that JJ Reid Motors is transferring to another well established, family-run business,” said JJ’s neice Bernie Reid.

The youngest of nine children, John Joseph ‘JJ’ Reid was born in 1932 in Upper Cavan, Killygordon. From there the family, who were well known dairy farmers, moved to Knockfair, Stranorlar in the 1940s.

After leaving school JJ worked in lime spreading. But it was in the early 1960s that he entered the business that would become his life’s work.

“In 1962 J opened a filling station in Stranorlar. The following year he joined Volkswagen carrying out services on their behalf and a year after that he became the main Volkswagen dealer for North Donegal. He retained the dealership until his passing in January 2019,” said Bernie.

Knockfair Autos, as he named his original dealership, quickly expanded and JJ took on several staff.

“He had a staff including my father Jim who acted as both book-keeper and part-time mechanic, neither of which he was qualified to be,” laughed Bernie. “J both valued and enjoyed hard work. This surpassed his great sense of entrepreneurship. He didn’t suffer fools gladly but was very fair and kind in his dealings with people. He had an enduring sense of public responsibility. But essentially he was a simple man who enjoyed the company of ordinary people and the odd pint of Smithwicks.”

One dealership became two with the opening of a Fiat garage on Letterkenny’s Pearse Road in 1974. Further forecourts followed in Castlefinn and Carndonagh and before long JJ Reid was working with the biggest names in the industry, global giants like Audi, Mercedes, Mazda and Ford Tractors.

As his entrepreneurial spirit grew, so did his interest in politics and in the early 1970s he was elected on to Donegal County Council as a Fine Gael member.

“He went into politics and very much enjoyed serving the people of the Finn Valley. He loved an argument about politics and sport, be it football or GAA. But politics was kept out of the workplace,” said Bernie. 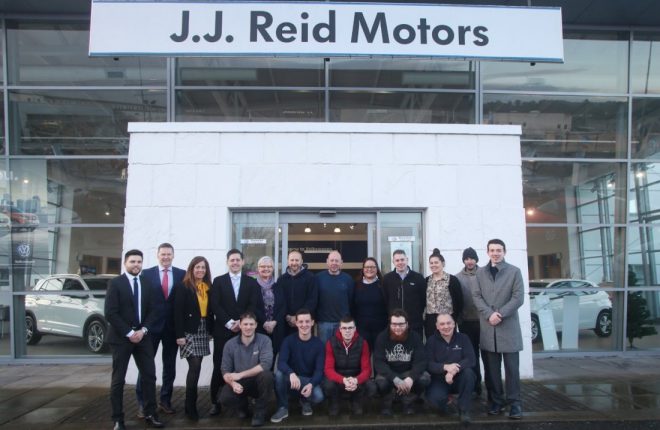 The current staff of JJ Reid Motors, Letterkenny. From Monday they will be in the employ of Connolly Brothers, another family-run business.

JJ Reid passed away in January of 2019 at the age of 86. Prior to his death he put the wheels in motion towards handing the business over to another family-run firm. On Monday JJ Reid Motors will become part of the Connolly Motor Group, a company established in 1939 by Thomas Connolly and which has since passed into the hands of his sons, Kevin and Neil.

Ahead of the handover Bernie said, “It has been a challenging decision but in order to maintain the business, retain the Volkswagen dealership in Letterkenny and to continue meeting the needs of customers and staff, a very amicable agreement has been reached with Connolly Motor Group to transfer the business.

“And I really want to thank Kevin and Neil Connolly. J was friendly with their dad and it is wonderful that it is being passed to another family business. The courtesy and respect they have shown us over the past year has been immense and I just want to wish them every success in their new venture. Their involvement will bring a new energy and vibrancy which can only be good for JJ Reid’s customers, staff and for business in Letterkenny and the wider area.”

No further Covid-19 deaths in Ireland