A Donegal man may well have just secured the Oscar for the most moo-ving marriage proposal ever.

Before taking the traditional route of getting down on one knee, Jamie Huey from Muff popped the question to his fiancée by spray-painting the big question on to two of her beloved cows.

Jamie and partner Claire Dunn had just finished milking when he surprised her with the udderly romantic gesture.

Speaking to the Donegal News, a delighted Claire said, “I had already picked the ring but I had no idea when he would ask the question. The proposal itself was a shock – I had no idea how he would propose but he had it all done himself and well done at that.” 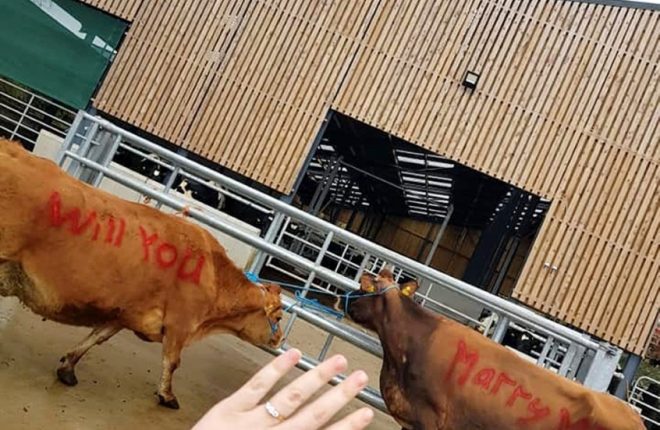 The couple are both farmers and have been together for seven years. Claire milks for Jamie on his dairy farm in Muff and also works on her
farm at home in Bready. The moment was extra special as Jamie used the two jersey cows which he gifted Claire for her 18th birthday.

“People say they have never seen a proposal like it. Jamie had it all well thought out – but I suppose he had long enough to think about.

The cows have a lot of sentimental value to us so it was really lovely,” said Claire.

The couple are now starting to plan their big day – but will have to work around the farming calendar.

“It’ll have to be a winter wedding to suit the farm. We are not sure when yet but hopefully it won’t be too far away,” added Claire