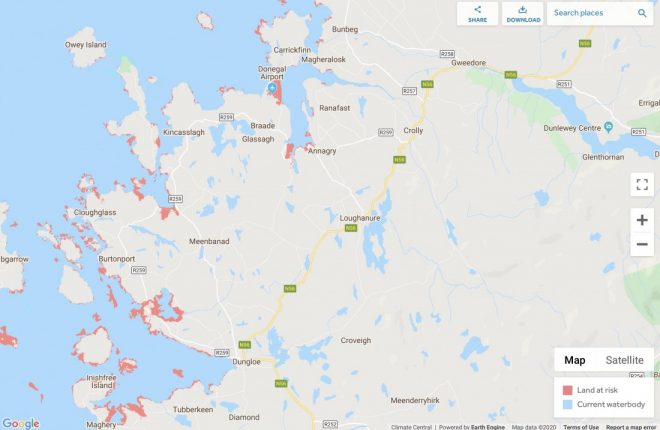 RISING tides will leave hundreds of homes, businesses and critical
infrastructure in parts of coastal Donegal under risk of flooding by
2050 according to a new report.
Considerable parts of Big Isle outside Letterkenny, An Grianan Estate
in Burt, the Moyle Hill area of Newtowncunningham, and north and west
Donegal are at risk of being below the high tide line in 30 years,
according to research carried out by Climate Central, a non-profit
science organisation based in New Jersey, USA.
River Foyle
Long stretches of the River Foyle from St Johnston to Lifford are
under threat while in the Creeslough and Falcarragh areas large
parcels of land are projected to be below the tideline in 2050.
Magheraroarty and pockets of Bloody Foreland are at risk as the
islands of Gola, Tory and Arranmore.
Lands forming much of Letterkenny Golf Club are also at risk while
large tranches of coastal parts of Carrickfinn, including Donegal
Airport, are under threat.
Areas around Belcruit, Burtonport, Maghery, Meenacross and Inishfree
Island are under threat, according to the paper.
Another golf club likely to be affected by further coastal erosion is
Narin and Portnoo links while Assaranca Waterfall, a popular tourism
spot outside Ardara, may well be flowing straight into the bay in
thirty years time. Lands in Dawros Head and either side of Loughros
More Bay near the Heritage Town are also under threat.
The research, which has been published in the journal Nature
Communications and in The New York Times, shows that rising seas could
affect three times more people by 2050 than previously thought.
While there has been much debate about how climate change might affect
particular areas, the specific nature of this research allows for a
sobering assessment of exact areas under particular threat.
The authors of  the paper have developed a more accurate way of
calculating land elevation based on satellite readings, a standard way
of estimating the impact of sea level rise over large areas, and found
that the previous numbers were far too optimistic.
Last year, a map developed by Climate Central, an independent
organisation for leading scientists and journalists, gave a detailed
insight of what Letterkenny will look like if temperatures rise by two
degrees and if they rise by four degrees.
Much of the town would be under water with a two per cent rise in
temperatures including the Neil T Blaney Road and large sections of
the Port Road.
The findings don’t have to spell the end of those areas as protective
measures like seawalls and other barriers can be installed but they
must do it quickly.