Trad Week runs from January 19 to 26 with a packed programme in store.

Following their highly-acclaimed 2018 tour, and their extended sold-out run at The Abbey Theatre, Livin’ Dred Theatre present the award-winning ‘Trad’ by Mark Doherty, an hilarious, absurd and poignant tale of a 100-year-old Irishman and his father on Thursday January 23.

Actor and playwright Mark Doherty said he’d love to say that he intended to write Trad, that he conceived the idea, committed it to the page, and sat back and watched as it came to fruition as he had hoped and foreseen.

“I always imagined that this is how it works. And maybe it is, for great playwrights. My journey was a little different,” he told RTÉ Culture earlier this year.

“Trad began its life as a short radio piece, a two-hander and little more than an extended sketch. It featured two ancient, bickering characters, father and son, bound together, mutually dependent, full of love and resentment equally, in an undefined time and place (anyone ever come across a fella called Beckett?). Anyhow, it went out on RTÉ radio, and that was that.

“But I soon realised there was more to be done with it. The manuscript lived in a bottom drawer for months, but I could hear the characters screaming at me still. I would go to bed at night and re-run bits of scenes in my head. Or wake up to find the father and son had infiltrated my dreams.

“I could hear them with great clarity. So out came the script again.

“Without meaning to sound silly, this is a beautiful and privileged position to be in: the feeling that the characters are leading the writing process. On the rare days when this happens, it really is a thrill to go to work. 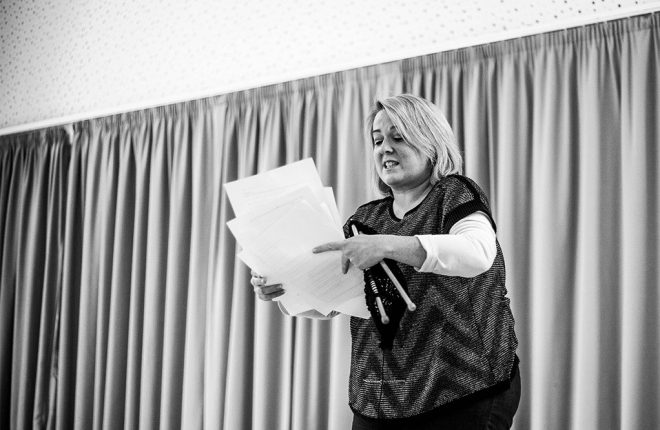 Clare Barrett, another integral part of the talented cast.

“Around this time, Rough Magic and the Dublin Fringe Festival came up with an initiative for new playwrights, called Seeds. In this environment, with lots of help and encouragement, my little play developed further. A year and a million rewrites later and I felt Trad, as a full-length stage piece, was ready to show to somebody.”

Featuring Clare Barrett, Gus McDonagh and Seamus O’Rourke, live original music by Jim Doherty, and directed by award-winning actor Aaron Monaghan, ‘Trad’ at An Grianán on Thursday, 23rd January is not to be missed.

Letterkenny Trad Week, January 19 to 26, is brought to you by the Regional Cultural Centre Letterkenny and An Grianán Theatre, with the kind support of Donegal County Council, The Donegal News (Media Partner), Music Network, Arts Council of Ireland and Earagail Arts Festival. Tickets are available from regionalculturalcentre.com, angrianan.com, Tel 07491 20777, on in person from the An Grianán Theatre Box Office, Port Road, Letterkenny.